This is a #wiki post, please help improve it if you have any further information.

After upgrading to Android 6 some users experience an increased battery drain. For some this goes away after a few days. If it stays and either Wifi or Google Maps show as the main culprit in the battery stats then you suffer the issue described in this topic.

More and more Android phones are being shipped or updated to Android 6.0 Marshmallow, and with that, new issues are being found weekly. One of the new major issues is the battery draining quickly when

This issue was reported as Issue #16 in the official bug tracker, but was rejected as it seems to be a known Android 6 bug that can only be fixed by Android developers.

Discussions in other languages:

Since I have updated OS to Android 6, my battery life decreased dramatically. Do any of you have similar issues and/or know what the cause is and how to fix it?

Have you given it a few days? On Android 5.1 it needed a few days to warm up it’s persistent caches after every update, I imagine this is the same on Android 6.

I recommend the same than @RSpliet and additionally you can try a “re-calibration” of the battery:

And further more some information about FP-battery in general:

Great! Thank you both so much. I updated the phone two days ago so there is still time, I guess. I will wait and try the recalibration as well.

It seems that the recalibration worked well. Thank you once more.

I had the same problem, the battery was draining very fast after the update. It was a bit alarming but I read this thread and waited a few days. The battery recalibration didn’t seem to help, but on about day 4 the battery drain just stopped and went back to normal.
So, thanks!
Maggie

I hope it’ll work for me as well. Noticed my batteries are drained quickly after the latest update. Also my text messaging has dissappeared…

My text messaging app had disappeared too. I think I reinstalled the
"messages" app and all of my messages were still there (I honestly can’t
remember if I reinstalled it or just found the app in the device and put a
shortcut on the home screen) It works fine again.

Since my last update to android 6.0. Marshmellow, My battery is in 6 hours empty, that makes me angry, because everywhere I need power bank to recharge, what can I do?

There is also a german topic about battery life issues after the upgrade and there it seems for most people Wifi is the culprit and always first in the list in Settings > Battery.

I have had my Fairphone 2 since March. It is running much better on the new Android software - before it was glitchy and kept rebooting. However, over the past few days the batter life has deteriorated significantly. With average use (mainly Whatsapp and Chrome - connected to wifi), the battery lasts a mere 5-6 hours. I am not a heavy duty user at all, and I am using it the same amount as before and didn’t have this problem. Can anyone help?!

Mine got much better. No longer have to charge every day. … then the phone broke (again), totally unrelated to android 6 I’m sure.

When listing the most consuming apps, selecting wifi will display more infos.
Unfortunately I can’t remember how I then reached the screen when we can deselect the usage of wifi by apps trying to get location info EVEN when wifi is switched off, but it could be worth trying to turn off this option.

It was in Settings > Location > Scanning

More and more Android phones are being shipped or updated to Android 6.0 Marshmallow, and with that, new issues are being found weekly. One of the new major issues is the battery draining quickly when

Funnily my phone doesn’t show the three dots in the location menu (German language setting). So I can’t get into the scanning settings.
Can you get there? 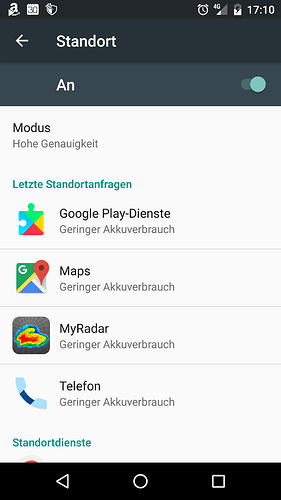 There are no three dots in this screen.
You have to tap on Modus and then you get a chance to change it’s setting.

You can use the search function of the settings. Type “Search” ( I hope this is the right keyword in English, in German it’s “Suche”) and you will be able to get there.
Sadly this didn’t change anything for me…

I own an Android phone for around 6 years now and never noticed there is a search feature in the settings menu.

Thanks for letting me know!

However it was already off.

Does anybody also thinks the battery is losing it’s power rapidly? With 5.1 i could easy use the phone 3 days. Now it’s 2 days, sometimes 1 day.

The same problem here - and: the handsfree-call-function doesn’t work because of the very poor loudness of the speaker during calls…