Why I switched away from Fairphone

BTW, this is the what I found: https://support.fairphone.com/hc/en-us/articles/4405858189585-FP4-Android-without-Google-services-Open-OS-
It says that neither the support article, nor the Google-free phones exist yet. Also, I just noticed that the third party article for unlocking+rooting is from just 4 days ago, so I wouldn’t have been able to find it before I bought my phone anyway. The old one was deteriorating rapidly, so I ordered it on the 20th of December, despite originally wanting to wait until a while after Christmas, to help spread out the stress on package services, but the old phone just became almost unusable. I didn’t expect to get so many helpful replies so quickly (and this is not even the help forum), so I expected to not be able to find anything helpful before my order.

“This product is not available for your country”

Maybe you’re in France. In Germany for example it is. You may head over to the /e/ forum for more details:

Murena FP4's on the way

🎉 We will be publishing the Murena Fairphone 4 for pre-order in Europe later today 🚀 This is the first 5G modular and privacy conscious phone in the market. ⏰ The pre-order campaign will happen in wave, with most European countries going live...

From post i’ve read here and on mastodon it looks like somewhere mid january. Also they will be selling the FP4 from that time, so that seems like a good guess. Still a guess though

Maybe it thinks I’m in France. It didn’t ask for my location and when websites just guess based on IP, they’re often wrong. I’m in Germany.

Well, ask on Murena side. For me it looks like this (so it is available): 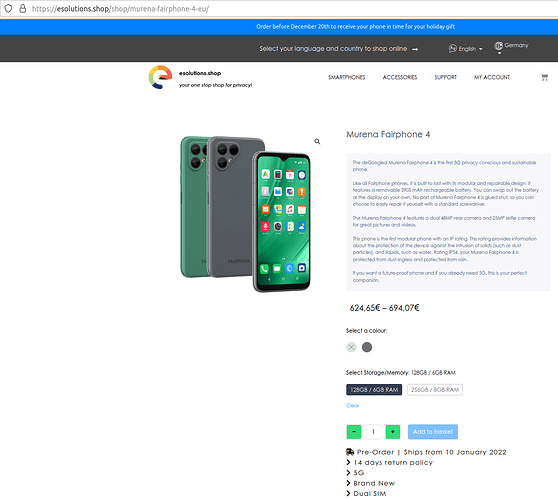 Did you read the Fairphone blog explaining why it was necessary?

Maybe you mean something else than what I saw so far. Can you link it, please?

Yes, I can search it for you and send the links then…

Here you are. Forum topic:

Some blogs covering how difficult it is to keep up the supply chain (for other modules, but the essence is the same; the official information regarding bottom modules was only sent out to customers via e-mail):

But it’s really really really not their core value. They probably know that it’s good to have, but by and large “no one” roots their phone and their goal is and has always been reduction of exploitation and waste.

So yeah, chill. Things are happening and actually pretty quickly compared to previous times. Plus in the end its all just a bonus.

I am really surprised by your lack of knowledge for somebody who wants to use an alternative OS. For already many years, Google refuses to certify a phone with the Android playstore if there is a version without its services sold by the maker.

Welcome to the forum

ITS NOT. /e/ or murena will be available for Fairphone 4 so will be others. Stop spreading things which are not true. For the other parts. Dont exspect that there are other modular parts just because fairphone makes a modular phone. Maybe there will be other enterprises who jump the train and will produce such blocks. Also the promise to have a long lasting phone did not really start with fp2 rather with 3 and 4.

So reading your post I clearly see that you are jumping for the shining things (again) instead standing behind fairness and resource recycle.

A OnePlus one 7 is a second hand phone so it is a good buy to save ressources even more than a brand new Fairphone.

From that point of view, a refurbished is always better…

I have recently seen three people in my immediate vicinity with refurbished smartphones in the good to very good class.
When I look at that and what they paid in the end, only refurbished will be an option for me in the future.

I won’t put the money on the table for what the things currently cost new. I am not crazy.
And it is always sustainable

Interesting. I used to do that before I got my FP4. But buying a two year old refurbished flagship won’t give you an awful lot of updates anymore. Messing with a custom ROM often makes your phone insecure. And opening the phone to replace a degrading battery will leave you with an actual IP rating well below that of the FP4.

Posted on the 17th of December.

“Prerequisites: Unlocked bootloader…”
Well, that was the main issue.

Why do people keep posting that XDA thread, when we have the OG topic with a lot more discussion / information right here on this forum?

Hello out there, i once used an FP1 - but after some years it was to slow and to limited for my usage - and finally the USB Connector broke… After that i used a rooted LG G6 - in between flashed with HavocOS (also rooted) “If you can’t open it you don’t own it” was printed on the back of my 3d printed FP1 Case. And when i am no root - i can’t use my device as an open device - it has still some locked rooms. Right now i am at a point where i was with my FP1 when the usage ended (excelt the bro…

Why do people keep posting that XDA thread

Why? Because they can. Stop thinking about such things…

That has its information spread out randomly across about 100 comments. This is much clearer: Fairphone 4 – Root -December 2021 – Stijn D'haese

I agree, that’s a great tutorial, but the thread still has value if people are searching for context or run into problems others have faced before them.
This is getting OT, I’ll stop, sorry.

And all is based on @hirnsushi work documented in this forum. And beside the discussion thread, we also have a debloat wiki #fp4guides summarizing all useful related topics and information.