Here’s a strange one - I occasionally keep my phone offline, turning off both WiFi and mobile data (for that peace of mind!). But for some reason, WhatsApp will sometimes “break through” and show me new messages.

Any ideas why this is happening, and - more importantly - why? Need that peace of mind…

I moved your post to #fairphone2help because it is not a general question about Fairphone software.

I don’t use whatsapp but i have found that one

there it sums the permissions whatsapp want to function.
under them:

connect and disconnect from Wi-Fi
and
modify system settings

there it sums the permissions whatsapp want to function. under them:

connect and disconnect from Wi-Fi
and
modify system settings

Wi-Fi connection and disconnection activities are logged with FRITZ!App WLAN. Of course, only activites after installation of the app are logged. Go inside the app on “Connection details” (second from bottom, just above “Give feedback”) to access the log.

If WhatsApp really connects/disconnects Wi-Fi itself, there surely is an option to turn that off. (Can anybody with WhatsApp help out and mention where to find this option? I do not have WhatsApp.)

If Whatsapp can modify system settings, it can surely also turn on WiFi. I can only find these settings related to data: 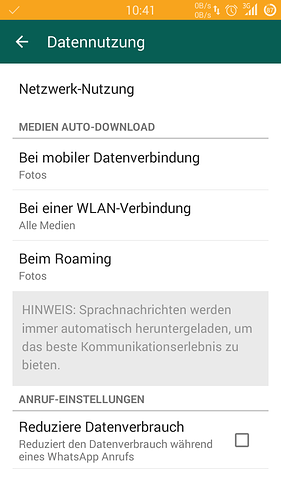 I’m afraid the only way to stop that from happening would be to restrict those permissions from Whatsapp, e.g. with #dic:xprivacy .

In the upcoming Android Marshmallow, that possibility should be built in, but I can’t say if Marshmallow can take away the permission to altersystem settings.

Which menu items are under “Netzwerk-Nutzung”?

Only statistics about your network usage.

Thanks everyone! I had a closer look during reboot (when I turned off the wifi and data via the ‘settings’ view) - and the phone definitely connects to wi-fi for a few seconds, and then turns it off.

It doesn’t seem to do so when on aeroplane mode, so from now in I’ll put the phone in aeroplane mode before I turn it off (I didnt’ think of doing that, so thanks for that suggestion!), and will keep an eye and see if it still does it in times other than when rebooted, or did I just imagine it.

Yes, of course. Sorry, should have been clearer - what I meant to say is that it is a little annoying that it is proving to be kind of tricky to keep the phone off line (while still acting as a phone), as I think it’s important to be able to use a smartphone just as a phone…

Funnily, you can turn on WiFi while being in Airplane mode.

Funnily, you can turn on WiFi while being in Airplane mode.

I think that works with any smartphone, and possibly tablet (at east it does on an iPad)

I had the same situation and wondered about it.
At night I turn of my wifi, but still in the morning I had messages and somtimes even an email.

Then I found it:
It is in the Wifi-settings.
If you click on advanced…
The second setting about scanning is probabely enabled.
This give your apps the right to ‘break trough’ and scan for messages, even if the wfi is turned off.

Hope this helped you.

(and a little surprised this option even exists! though I suppose it would make sense in certain contexts)

Hi Michelle, did you change the scanning setting? Did it work for you? because I disabled it, and I still got a WhatsApp message when my wifi and data was turned off!