Hi @ChristerMLB and welcome to the forum!

Hi! I am Sabine, I live in Haarlem and since yesterday are a proud Fairphone owner.
This company really inspired me and I can’t stop telling people about the great concept.
I am originally from Germany, but live in The Netherlands since August, close to Amsterdam and I hope to be able to take part in the #efct17

Welcome to the Fairphone Community, @Tawa!

Great that you are planning to join us at #efct17 !

No I hadn’t. Sounds interesting [

Hi! I’m suddenly a FP2 user - after a year… Woah! An ethically sourced, fixable, 'smart’phone, from a community based phone co-op?! Happy days for an old hippy. I actually got my Fairphone 2 (my first ever "smart"phone) in Feb 2016 while in London - from the Phone Co-op (another potentially excellent idea). Then I moved back to working in the country (Devon, Somerset etc) - where the Phone Co-op (via EE) had very little signal. So my exciting FP2 got stuck in a draw, unusable, till Jan 2017 - when I realised I could buy out the contract and get back to Vodaphone Happy days, it worked, last week

Suddenly I’m in a wood - and get messages, emails, even YouTube! (This last may depend on WiFi availabilty) SO, running my sauna and showers set up at UK small festivals (as I do), I’ll flash my ethical Fairphone! Now to go search for a Forum Thread called “What’s an app?” which would be apt for a tech almost newby - one who wants to set up my FP2 to be as easy to use as my backup Samsung GT-C3350… Anyone seen a Fair Laptop yet?

3 posts were merged into an existing topic: Which computer do you recommend?

Welcome to the forum, @Stuparod !

Yo can search the forum by clicking the little magnifying glass above. There is a lot of information already that will satisfy your interests. If not, join the discussion in the respective topics!

I do not own myself a Fairphone (nor any smartphone at the moment) but
lately I convinced a friend to buy a Fairphone2 with the aim of using the Fairphone Open OS.
It was first activated on the beginning of February 2017.

Since then she is experiencing a few troubles, and I’m also trying to figure out which apps will or will not work on Fairphone Open.

Hi, @mohican, and welcome to the forum!

I’m also trying to figure out which apps will or will not work on Fairphone Open.

Every app will work (some only after installing the #dic:xposed module This App Will Run Without Google Play Services), but the trouble in most of the cases is, where to get them from. In any case, you should have a look at #livingwogoogle .

Hey folks. I just got my new FP2 and ready to dive in.

I’m an experienced freelance embedded software engineer, with a lot of experience with free software projects, but I’m not so fluent in the Android environment, so there’s a lot for me to learn. I already spent some time going through forum posts and documentation, trying to figure out what’s what and especially what software I’ll want to run on my Fairphone.

To be honest, I’m a bit overwhelmed so far with the various options, caveats and workarounds, so I’ll probably be asking questions all over the place. I realize that being new gives allows me to see where (forum) documentation can be improved, by spotting the unclarities in the things I’ve read, so I’ll try to help out by asking questions with that in mind (sometimes even if I already figured out the answer, or at least I think I did).

Welcome to the forum, @matthijs ! Feel free to edit #wiki posts yourself!

Also, I’m sure you’ll find some interesting stuff in the #hardware:diy category.

want one too! a ff1 badge

FF1 replaced screen twice and after third drop i got the FF2. Had to turn it in immediately because of failing dual sim. work with ff2 now with one sim. and another old iPhone, as two sims don’t work flawless in ff2

want one too! a ff1 badge

The badge is only for First Edition FP1 owners. According to your earlier post, you had a second batch FP1 (=FP1U):

So, second batch of FF 1 and im pretty happy with it.

Edit: When your FP1U is over 3 years old, you can get this badge:

I’m new in this community and up to now I don’t possess a fairphone. However, I take into consideration to purchase one.
Besides of my interest in sustainable electronics, I’m intrigued in nature

and in the music of Avril Lavigne. Furthermore I’m engaged in powerchair-hockey, which is a type of sport for people sitting in a wheelchair similar to field-hockey.

This sports is popular here in Germany, but it is even more well-known in the Netherlands.

Today, I registered in this community because I have an unusual question. You can find it here: Question about mouse-functionality

Welcome to the forum, @Tuvok !

There actually is a wheelchair emoji:

Hello I’m Albert and I’m a new Fairphone user.
I would try to do the least pain to this planet.
Nothing more, I’m a linux user, I had interest on Jolla SO.
Thank you for this phone.

Welcome to the forum, @albert-I

I’ve been a FP2 user for something over a year, and my enthusiasm for Fairphone and its values has brought me some invitations to speak about it.

I thought people here might possibly like to see this article, which appeared in the UK’s best selling national Catholic newspaper (the story was carried in some others, too) after one such invitation. Sadly they didn’t make the point about FP2 having two SIM slots, which did excite some students and teachers present at the presentation, but I think it’s still a good result. 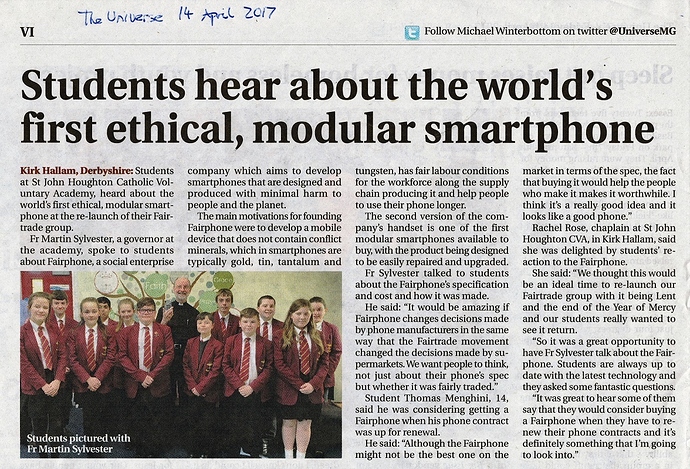 The kid who said the spec isn’t the best had asked about a type C USB connector and NFC functionality. I did respond that the connector board is a module, so, maybe some day, a type C connector could appear as an upgrade module. And I showed the expansion pins (I bought a clear back cover to use for this presentation) and speculated that they might support a cover with NFC if somebody wants to develop one.

Welcome to the forum, @MartinUK and thank you for sharing this story!

It’s great to have another representative of the clergy here!