Hi again. Have you tried removing the bumper? When I did, the audio during calls seemed to improve.

Hey there,
I noticed a slight audio-issue a few days ago, when I recorded a short video.
Didn’t realy get to recheck, but might mention it anyways.

When recording videos in landscape mode and holding your FP3 one-handed, you might cover the mic-hole (the one next to USB-C) with your palm. This might cause some disturbance in the audio and I think that’s the reason my audio came out a bit fuzzy.

Will do some further tests the next few days.

Anyway, you should also try a different camera application, since I noticed that the original camera application has enabled by default (and you can’t disable it as far as I know) a kind of noise filter that completely destroys the sound when recording music.

You can solve it in the Opencamera app by selecting “Unprocessed” under “Video settings” -> “Audio source”. Try it out!

For me that’s really an issue. I usually use my phone a lot to record during music rehearsals. Cannot do that with the FP3 at all beacuse the recording quality is a desaster – terrible! The sound quality keeps pulsating throughout the entire recording, within just seconds it goes from crystal clear to completely dull and back and forth and ever so on.

And the app doesn’t matter: This happens when I record usinge Audio Recorder, any other recording app or even record a video including sound. There’s something really wrong about this and I wish it to be solved soon.

I have a very (very) bad sound when I record videos with my fairphone 3, since I bought it, one month ago.

At first I thought the music I was recording was too loud (even though my last phone : LG4 please… very old, could record it very well)

But then I tried to record myself playing piano, and the result is still very very bad.

Do you think there will be any update that can correct that ?

Do you have the same issue ?

Should I change one of the component ?

It seems it’s working well for calls, because I never had any feedbacks from people I called.

Sorry for my english, I’m french

I moved your post here to avoid duplicate topics.
As for what to do …

Anyway, you should also try a different camera application, since I noticed that the original camera application has enabled by default (and you can’t disable it as far as I know) a kind of noise filter that completely destroys the sound when recording music. You can solve it in the Opencamera app by selecting “Unprocessed” under “Video settings” -> “Audio source”. Try it out!

What is/was the "minor issue about the audio feature of the phone" "in less than 1% of the phones"?

Also, please make sure to contact Customer support anytime you are experiencing a problem. All the information is logged and provides valuable intel for improving the product.

A support contact form for the Fairphone 3 can currently be found here (just choose Fairphone 3 as your model) …
https://support.fairphone.com/hc/en-us/articles/115001041206

My experience is the same

I also do have issues with the call quality. Why is there no bug tracker for the FP3?

Why is there no bug tracker for the FP3?

LED notifications do not work

for the time being we are monitoring and quantifying any the issues that are reported via the customer support form/calls. The bugtracker we created for FP2 had issues we tested and confirmed. It’s too soon to create such a format for FP3 - and the process in itself might be different this time - with regards to reporting.

Alarmed by this thread I just did my own experiments using “Audio Recorder” from FDroid.

The mic audio source becomes unusable if there are ambient noises such as music. After a few seconds of recording the music, the audio quality heavily degrades, surpressing and amplifying random frequency ranges in a way that sounds “under water” almost as if several flanger effects were overlayed over each other.

It seems that the “Mic” source has a voice filter auto-enabled that behaves very badly if the audio source is not a single voice but music or anything else.

The “Unprocessed” audio source does not exhibit this behavior but has an extremely weak signal. To hear anything, I had to software amplify the signal by at least factor 4. At this soft gain factor there is a lot of of white noise audible.

What’s missing is a source with a hardware gain that doesn’t try to be too smart for its own good. “Unprocessed” has terrible signal to noise ratio due to lack of gain and “Mic” is unusable for anything but an isolated speaker.

I made a video comparing the sound of a song with the default Camera app VS Open Camera (with different audio input settings):

Default audio is good when simply talking to the phone, but absolutly not when singing or playing music. But, as @corvuscorax pointed, “unprocessed” audio usually needs to amplify the gain to get a decent/normal audio level (I found that you can do it easily in Audiofix, but it would be really nice if you can choose the entry level or a kind of auto input level).

Maybe the good thing of the low audio signal in unprocessed is that maybe if you record live music events with this configuration, audio will be good and not distort (“clip”) the signal

8 Likes
FP3 - Video Gallery
Has anybody received the latest security update yet?
Improving the software of FP3
corvuscorax December 4, 2019, 5:37pm #21

I’d like to add though that amplifying recordings from the “Unprocessed audio source” in post processing adds comparably lots of white noise to the signal. Audio would be better if the signal was hardware-amplified before recording, but without such a horrible voice filter.

Most phones add such a voice filter during audio calls, when the only relevant audio signal is that of the speaker holding the phone to his ear, while all ambient noises should be suppressed.

Anything else, including hands-free audio calls, video calls, video recordings, streaming, chat apps with video conference support (Wire,Telegram,Whatsapp,…) basically EVERYTHING else but old-school voice calls should not have this particular filter enabled.

This must be a driver misconfiguration in the Fairphone. Every other phone on the market instead has an “auto-gain” filter for that, which auto-adjusts hardware gain to prevent clipping and optimize signal-to-nois, but does not try to single out voice.

Yeah, after some testing, the same happens on my phone. Seems to be a general problem and would love to see Fairphone (the Company) fixing it.

Maybe the good thing of the low audio signal in unprocessed is that maybe if you record live music events with this configuration, audio will be good and not distort (“clip”) the signal

This is true. Yesterday I went to a live concert and I recorded a clip with my FP3 and Open Camera with “unprocessed” audio input setting to test this. This is the result:

Music was really loud in the hall, but the audio quality in the video is pretty good, I think.

P.S: the autotune in the vocals was in the live sound, it was not added by the phone

@Mixigodo thank you for your hard work and provided proof

Because it appears you have found a software workaround for this problem I have added the issue in Improving the software of FP3 – feel free to improve it further.

Just for clarification, am I correct in the assumption that it’s not possible to change the audio-source in the stock camera app?

That means in order to do so (for the software workaround) one first needs to install a 3rd party camera app. In the default camera app, the audio source is not configurable, not even in the developer options (in camera settings one can tap the version number 20 times - exposing additional settings, including selecting the camera video source by ID - but unfortunately not the audio)

It also means the issue persists in ALL apps that don’t explicitly allow changing the audio source, which unfortunately seems to include a lot of standard video-chat apps such as Wire, Telegram, Discord, etc…

Discord allows to switch the audio source between “Communication Mode” and “Call Mode” - but as I understand this is not switching the source but only the recording profile (and the default for most apps is comminication mode anyway) - also I didn’t get the mic to work at all in Discord, at least not in microphone test mode theres simply no signal.

I don’t have skype and/or whatsapp. Can anyone check if
a) video calls with either are 1. possible and 2. affected by this issue and
b) if a workaround (aka switching audio source) is possible in these apps.

if the majority of “required” communication apps do not offer the workaround, then this remains a driver respectively driver audio/profile issue.

I had a look at the documentation. In Android, there’s no separation between audio sources and audio profiles, they are selected both at the same time:

They are documented here:

Microphone audio source tuned for video recording, with the same orientation as the camera if available. * @apiSince 7

Microphone audio source tuned for voice communications such as VoIP. It will for instance take advantage of echo cancellation or automatic gain control if available.

Most coding examples, including https://developer.android.com/guide/topics/media/mediarecorder simply record from the DEFAULT audio source, although some select MIC

On the fairphone FP3 it looks like sources MIC and DEFAULT both include filters that only make sense in the VOICE_COMMUNICATION context - which in turn leads to the horrible distortions we have noticed.

Some other common sources seem to be either unavailable or not working at all, causing for example Discord to have no audio.

Some apps allow selecting “UNPROCESSED” which unfortunately has too low hardware gain.

To properly debug this, one would probably have to write a little demo application that tries to record from each configured audio source and see what happens.

What we know is
Most apps that record record horribly, which suggests at least DEFAULT and probably CAMCORDER sources apply filters that should not be applied in that mode but only for VOICE_COMUNICATION

The Fix:
Dear Fairphone: Please compile a test app that can test each of these sources/profiles and run it, if you haven’t already. Test them with various test sounds, including music!

Then fix the audio profiles on Fairphone3, especially DEFAULT, MIC and CAMCORDER – remove or fix the filters for echo suppression or whatever’s active there, they fail horribly, as seen in the videos above.

In the meantime, the workaround:

For deliberate video or audio recording, install an app that allows chosing “UNPROCESSED” - then edit the file with postprocessing software and increase the volume.

For video chats and similar: If you are at a party or in a similar loud environment, go outside or in a different room, so the filters don’t get confused with the noise.

For apps that don’t work at all: Use a different phone until Fairphone fixes this with an update.

I made a fork of the android-audio-recorder on FDroid and patched it so it can record from any audio source Android knows about (Not just MIC and UNPROCESSED) and they can now be selected explicitly in the preferences.

Feel free to use that for further testing. 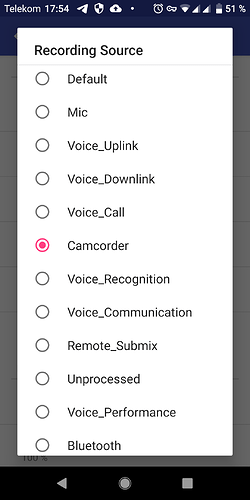 should compile with either android studio or command line gradle - any ideawhere i could upload a debug apk?

ok, here is a test audio file to test the microphone with for reproducible results:
https://github.com/CorvusCorax/android-audio-recorder/raw/fp3_tests/sounds/testsound/test_samples.ogg
and here is the apk (debug build)
https://github.com/CorvusCorax/android-audio-recorder/raw/fp3_tests/apks/audiorecorder-universal-3.3.11-debug.apk