Hey I am running LOS 15.1 with microG included on my FP2. Is there any way I can invoke the updater manually? I sometimes get the notification that there is an update, but I don’t find a way to open the dialogue by myself.

Also is it necessary to install the updates in order or can I just install the newest? Anything else I must look out for with the OTA update?

I will continue with 3G until the end of the week. Then I will switch back to LTE to test it once more.

Did you find some clues during your tests?
My “wokraround” with this issue is to switch to Wifi as soon as I can and disable mobile network. And when I don’t have LTE coverage also disable mobiel data (or switch to 3Gfor a longer period) … all in all not very pratical

Well, there has not been a lot of testing since everything goes well when I stay on 3G. It’s been almost 2 weeks and I always have more than 40% when I go to bed, often more. So it’s quite conclusive.
As promessed, I will now put the settings back to LTE and give it a try this week to see if it’s as bad as it was before.

the phone does not automatically boot into recovery mode after the latest update (20.10.2018) has been downloaded and the installation has started.
The phone restarts completely.
I have to manually bring it into recovery mode and then immediately starts the update process.

the phone does not automatically boot into recovery mode

… and you can’t turn off the phone, it reboots instead?

Consensus up until now is … For LineageOS and Fairphone’s Android 7 this currently doesn’t work with the new camera … unless you activate the flashlight before rebooting/turning off (relatively new workaround).

If you have the new camera … did this really work for you before?

… and you can’t turn off the phone, it reboots instead?

I have now installed TWRP 3.2.3.0. Started now in recovery mode

and i have the new cameras (front/back).
Thx for help.

My phone two has LineageOS without gapps (google) and now TWRP 3.2.3.0 and does not start in recovery mode and shutdown causes a reboot. Is a new phone with new camera modules. That’s crazy…

As promessed, I will now put the settings back to LTE and give it a try this week to see if it’s as bad as it was before.

I noticed, when my phone is either in LTE or mobile is deactivated, the battery life is excellent.
So it seems that the network standby issue has a significant impact.
Does anyone know, if the lineage community is working on resolving this?
Cheers

Boot in Recovery Mode dos not work. (TWRP 3.2.3.0) and LineageOS with and without gapps. Last week, it still worked on one of the two phones.

Last week, it still worked on one of the two phones.

With the new camera? It seems that would be an anomaly.
Anyway …

activate the flashlight before rebooting/turning off (relatively new workaround).

Yes, new Camera Modul and the “flashlight-workaround” worked only shutdown.

and the “flashlight-workaround” worked only shutdown.

Hmmm … works for me.
Well, the default way to enter recovery is to hold Volume Up while starting/rebooting anyway, so there’s still that.

I have since last Update many reboots per day.

The last_kmsg file has since not enough rights to read and send to cloud for chris.

I’m having some trouble with push notifications on rooted LOS 15.1 for MicroG, which I’m running for 2 months now.

Some other apps are working as expected (WA, Telegram) but are not registered for GCM as well. I think I didn’t configure MicroG correctly at the beginning and fixed that later after some apps had been installed already. That may be the reason these apps didn’t even try to register for GCM and used their alternative (websocket or whatever) inbuild solutions.

But for eBay Kleinanzeigen there is no inbuild alternative solution and this app is one of the main reasons I decided to go for MicroG at all.

Some other apps are working as expected (WA, Telegram) but are not registered for GCM as well.

As far as I can remember, GCM was overhauled a few months ago and is now called Firebase Cloud Messaging (FCM). The microG project had some difficulties with the new FCM but I don’t know if they’ve succeeded in porting the project to the new version yet.

Does anyone has some update about the network standby issue?
I commute every day by train for over an hour and of course I have many changes in the quality of the signal.
I’ve got a really good battery all over the day, but these rides are more and more a pain in the a…

The Signal Messenger issue has apparently been solved through a system update (20181210). I’m receiving Push Messages (sometimes a little late) - it seems to be working quite well.

I tried to solve the eBay Kleinanzeigen issue by installing a legacy version of the app. The first version I found was 7.3.1 from Sept 2017. After installing and opening the app I immediately received the Push Notification request Pop-Up and confirmed that. But Notifications are very rare, I only received 2 until now during several days, even though I know that there should have been much more.
So, in fact there still seem to be issues with the new FCM in microG. I’m going to contact their support team directly.

EDIT: After installing the legacy version of eBay Kleinanzeigen and successfully registering for push notifications I decided to upgrade again to the latest version (8.7.0). Now I’m receiving notifications very reliable. Seems like there’s only a problem with the registering process for the newer versions.

Hello!
I have again problems with Pico TTS. It is simply silent. I cant download any voices when i go to the options (they are grayed out). Other TTS like the one from Google work without problems. Sometimes other buttons are grayed out too. But even when they are not grayed out and i tap on it nothing happens.
I had the problem already and tried different TTS apps and after a while Pico TTS suddenly works. And now it suddenly doesnt work again.

Edit: After the Update to 07.01.19 it works again. But the languages are still grayed out.
A few days ago i deleted /system/media/ui to get the screenshot sound away. Maybe that was the problem. 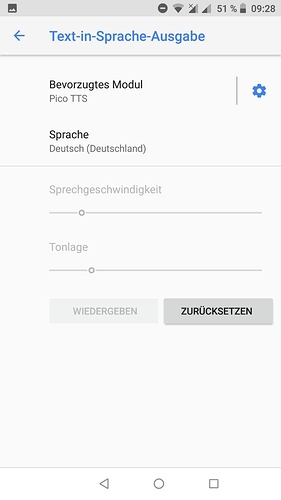 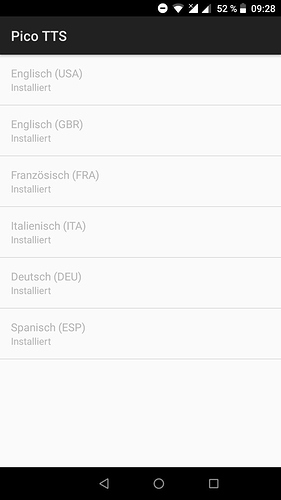