By reproducible I would interpret that as finding a way to stop it and then set the problem up i.e. it would be a software issue.

If it happens ‘always’ that is different but if neither of us have done a reset then the question will always be “what have we done to make this happen” and why haven’t we done a reset, implying the issue is not that serious and we can live with it

Resetting my phone is a thing I cannot just do every day or so, loosing all app data and apps etc.
That’s nothing about seriousness. It’s just about a software quality Fairphone has to provide. That’s what you paid for and bought. And apparently it does not work.

As I’m friendly and enough “technical” I do help to debug, but many of such issues scare people away. Then they’ll stick with Samsung or so, where everything works, at least.

However MIC2 is really also silent when I’m 1m or so away from the phone. Only if I speak directly to the top of MIC2, I can hear it. It seems that MIC1 is even more sensitive than MIC1.
MIC1 is recording is even louder than MIC2 recordings when I’m speaking directly into the MIC2.

This is also what Fairphone describes in their self-help: 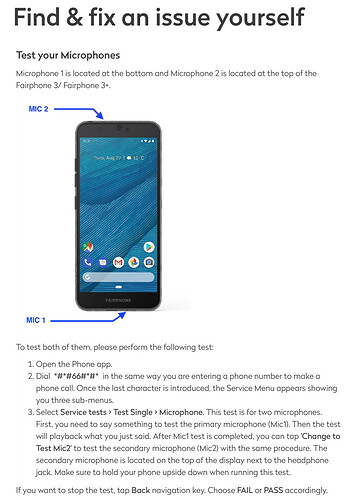 Feel free to test it out this way.

Yes I had tested the mics and know they are OK

I reported it a few days after I bought the FP3+. Ticket is from 27. October 2020. Countless e-mails and tests followed.
I hope your ticket will help!

I also tested both mics.
When holding the phone like during a call the recording from Mic1 sounds good while the one from Mic2 sounds bad and is like the quality I get during a real call.

Cross-posting here also the other topics dealing essential with the same issue:

BTW support has replied me:

As the issue mostly seems to concern third-party apps, please:

If the problem persists:

Well… I have no big hopes but I’ll try… at least the app installation.

As mentioned here and here: Fairphone found a bug in the audio system, which causes multiple audio issues and will be fixed by the next update.
I guess this will be the real solution instead of reinstalling apps or even doing a factory reset.

Anyway reinstalling the app did actually work somewhat, whcih surprises me as I’ve deleted the app cache etc. before IIRC.

Unfortunately I just tried it again and it does not seem to be better, actually. Maybe I misinterpreted that.
It really depends how near I’m the microphone.

Additionally, I’d like to add that even in normal “not hands-free mode”, i.e. is it called earpiece mode(?), the echo cancellation does not seem to work well. Other people can often hear themselve.
This also happens in Threema (I tried both echo cancellation set to “software” and “hardware” in the settings, nothing improves that) and Jitsi Meet, yet again.

Whereas I hope @ontheair is on it with a fix in the next update the issue has resolved itself on my phone, coincidentally with clearing some apps.

However i only installed What’s app to see the problem my daughter was having and here’s the news.

She wrote a strongly worded reply after her official support query suggested she looks at the forum, which she considered totally out of order, so they are sending her a replacement.

I am asking her to forward me all the comms to point out to the disappointed and disgruntled users that may have considered FP deceptive and dishonest that FP does take responsibility, though it may require a non compromising exchange of consumer expectation early on about the product not being fit for purpose.

Additionally, I’d like to add that even in normal “not hands-free mode”, i.e. is it called earpiece mode(?), the echo cancellation does not seem to work well.

Yes, that’s what I mean. When doing regular phone calls I never use the “speaker mode”, but always doing it the “regular” way with earpiece or bluetooth headset. People also tell me that they can hear themselves echoing, and additionally - from time to time - there is stuttering audio, artefacts, etc. on both sides (regular VoLTE-calls, no VoWifi).

This also happens in Threema (I tried both echo cancellation set to “software” and “hardware” in the settings, nothing improves that) and Jitsi Meet, yet again.

In Jitsi Meet I prefer to use the “speaker mode” / “handsfree mode” and this is not working at all. Audio output just happens very silently on the earpiece, not on the speaker at all.
(Can not say anything about Threema; I use Threema a lot every day, but just for texting and not for doing audio / video calls.)

the issue has resolved itself on my phone, coincidentally with clearing some apps […] However i only installed What’s app […]

At least in my case WhatsApp seems not to be the root cause, as I never had installed WhatsApp on this phone.

As also explained by others here e.g. the 0084 update did not fix the issue for me. At least not in apps like Jitsi Meet.
I can also still reproduce the issue in the Service menu.

Yes, unfortunately it seems that the 0084 update exclusively fixed the four bugs mentioned in this first post.

All the other bugs are still around

Just to note it looks like a solvable software issue as a switch to Lineage seems to have resolved the problem as per this post.

I bought a Fairphone 3+ less than two weeks ago. After setup I got this software-update and installed it. The same day I tried videocalling with Whatsapp/Signal and ran immediately into the issues mentioned: The caller couldn’t hear me. Audio-calling other than normal phone gave the same problems when I tried to use the speaker. I made a ticket but no answer yet. In the meantime I flashed LineageOS 17.1. It was pretty easy en it solved problems I had with the official ROM. Normal calling is …

Just to note it looks like a solvable software issue

Sure. The hardware is working fine, it’s a software issue.
That’s why I hope the next update will arrive soon - and hoping that these issues will be adressed in the next update, as I mentioned and asked here.

Just an update on other views of this issue

Just a couple of relevant notes about the call volume on hands free: I see form the following post that video calls are understood to use only the top mic:( and yet another post says this didn’t happen with A10 V0054 ??