Hi, since yesterday, my FP2 is afflicted by unwanted app suggestions. They pop up anytime, whatever I’m doing. they look like Play Store suggestions, but I’m not sure. How can I stop that? I tried rebooting the phone but it hasn’t helped. Any idea? Thanks!

It’s probably caused by an app you installed.
You can either find out which one and uninstall it or install an ad blocker like AdAway.

Hi, thanks, I have found the guilty app, problem solved!

Hi, thanks, I have found the guilty app, problem solved!

Which app was guilty?

If you need another one, I’ve never had issues with the one by zxing (FDroid / Play)

I can recommend the ZXing Barcode Scanner in this case. It does not come with unwanted notifications, app suggestions or other anti-features, it is even ad-free. And fans of the F-Droid store find it also there.

Example of an anti-feature warning: 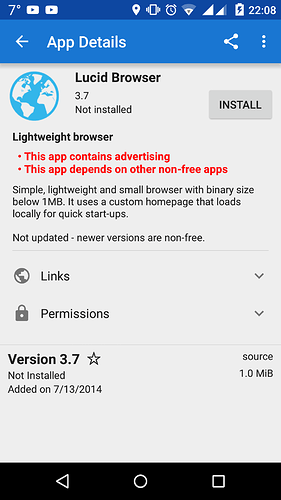