Unfortunately also the second try of flashing lineage-16.0-20191017-UNOFFICIAL-treble_arm64_bvN.img (I tried it with the LOS 16 now) wan’t sucessfull: LOS and TWRP won’t boot again. But now I know at least how to go back to stock

I will post my problem in the GSI thread again, as it is not about TWRP.

Did you test with sparse images?

Not yet, I’ll try later

@pigpig I was just thinking, maybe you want to add a check if it’s actually an FP3 connected in your flasher-script:
fastboot getvar product

Ps: Nice job everybody for the edl programmer

hello, i am a quite a noob about coding. i had my FP2 with Open OS and want to also have TWRP on my FP3 now. i tried to read the whole thread here but i often get confused. is there a step by step tutorial for twrp for fp3? like the one for magisk what was posted here?
can i install it also with just my phone or do i need to use a PC for that?
also when i fucked up or when smth happen, is it possible to get back to the stock firmware of fp3 somehow and reset everything? i know there isnt a backup system for the fp3 right now without twrp.
and thank you for making the fp3 safer. i really hope soon when the open OS is coming for fp3 that it will be as easy to install it as in fp2, which luckily had twrp when i bought it.
also, do i need to root my fp3 to install twrp?

TL;DR: i would like a step by step tuto the install twrp on fp3 from scratch for dummies. Thank you very much

i would like a step by step tuto the install twrp on fp3 from scratch for dummies.

Step 0.
Don’t really install TWRP if you want to keep your Fairphone OS updating automatically. Installing TWRP means changing the boot partition, which will break OTA updates of Fairphone OS because the updating process checks whether the partitions are unchanged.
This is now different from how TWRP and OTA updates worked on the Fairphone 2.

Step 1.
Unlock the bootloader. This will also do a factory reset.
Heed the warning …

Step 2.
Instead of installing TWRP, just boot it with fastboot from a computer (fastboot is part of the Android SDK Platform Tools) …

You can boot into twrp using fastboot boot <twrp.img>

Unlock the bootloader. This will also do a factory reset.

You might also be the first to try this

I can understand you’re eager to get this tested, but I don’t know whether that’s such a good starting point “for dummies”

It does unlock, it remains to be tested, if it really doesn’t require a factory reset.
But maybe you’re right, this isn’t “for dummies”, I’ll edit my post.

thanks both of you.
too bad twrp wont be like on fp2 with the updates, but i would take that. twrp was very helpful for my fp2 with the total system backup, which i dont have right now with the vanilla fp3 and if the Open OS will come for fp3 maybe it is the easiest way to install that, i guess. so i try to prepare it for that day. i have no problem with updating manually, i mostly do that anyway.
but your suggestion was not to intall it and instead unlocking bootloader and then use fastboot via a pc and boot twrp? did i get that right? so basically i use twrp on my pc for the smartphone and i can back up everything like that?

so basically i use twrp on my pc for the smartphone and i can back up everything like that?

Not quite.
You connect your phone to your PC via USB, boot the phone into Fastboot Mode, and then you execute fastboot boot twrp.img (or whatever the filename is) in a command line on the PC.
This will then boot TWRP on the phone without you having to install it. Nothing will change on the phone, as long as you keep System read-only in TWRP (important!) …

Make sure you have the option “Mount system partition read-only” checked in TWRP if you want to be able to OTA.

You should generally use the respective “Image” for every partition that gives you that option.
Image will create a direct one-to-one copy of the underlying block-device.
TWRP typically doesn’t include backup-options for all possible partitions.
I have included the ones that are most likely to be modified when the device is rooted.
I have also included some partitions that contain device-specific information such as IMEI (EFS).
It is probably a good idea to backup EFS once and store it somewhere safe, but you typically should not restore it every time.
For a normal ROM Backup/Restore cycle the following partitions should suffice:

I just want to add, that if you intend to root or otherwise modify your system that will also result in OTAs failing.

oh great, thats even better, saves some space on my phone. i will read into it more. thanks for the help

I built a recovery image and since all those instructions and readmes were rather confusing, here is what I typed:

Sorry, I know this is a n00b set of issues and question, but how would I go about using the zip installer.

In the past I have simply directly flashed TWRP to devices. I can see there have been issues with install and I don’t want to corrupt the device.

In the past I have simply directly flashed TWRP to devices. I can see there have been issues with install and I don’t want to corrupt the device.

Then you don’t install it, you just boot it …

You can boot into twrp using fastboot boot <twrp.img>

Make sure you have the option “Mount system partition read-only” checked in TWRP if you want to be able to OTA.

Thanks, all sorted and installed

I’m not sure I would tell this here, if I wouldn’t, please tell me, I’ll delete my message. I’ve encountered a problem rooting my phone using twpr and magisck. May anyone help me ? I’ve created a new post in order to avoid “flooding” this one, here Problem with rooting FP3

And really sorry if my ask seems to you inappropriate.

I’m asking because my phone shows me that an update to A.0111 is avialable, but fails to install, but I haven’t modified my system since then. 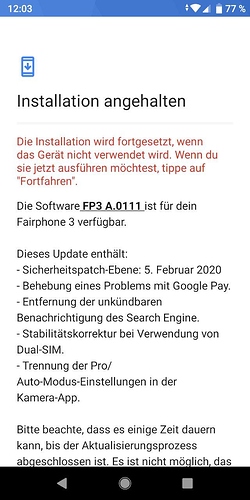