after I received my replacement phone today I wanted to restore my backup via TWRP.

But somehow no backup files are detected. If I refresh I get an error message (See screenshot).

But in other options TWRP shows those files, just not at the restoring menue.

Copying the files to the internal storage doesn’t help. But the file are stored on my phone! 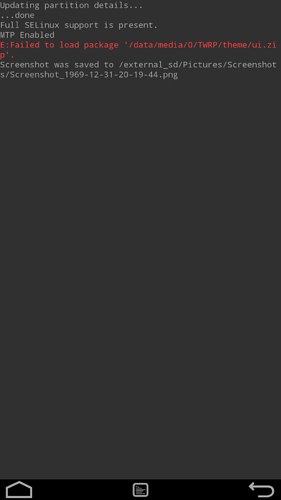 I would be very glad if anyone knows what to do.

The Backup is a folder! The name of the folder start normally with the date, followed by the time and the the version.

Thank you @spielemops. I checked the data names and everthing seems to
be allright with it. But it just does not work.

Another idea is that I made the backup with an earlier version of FP
Open OS so I will flash it tomorrow and see if it will work. Afterwards
I would make the update. Let’s see…

But I am still open for other suggestions!

In your screenshot nothing is ok …

Just a short feedback on this topic. As I mentioned here https://forum.fairphone.com/t/pencil2-porting-twrp-recovery/12558/82?u=sky I had to replace my Fairphone. Used TWRP from @Max to backup the old one. The restore on the new one worked. The only think I had to do was, make a new backup to have a folder with the serialnumber of the new phone and copy the the old backup in this folder. After restore wipe cache and dalvik cache. Thats it!

@sky Thank you so much!!! It worked! Everything is as before. That is so great!