Perhaps it is an idea to reset the software of the battery. See dic:kickstart for instructions.

One more thought: If the device gets very hot, it can reach a point when charging is stopped by the device to prevent it from damaging overheating. This might happen when an app is running wild, i.e. permanently running and using excessive energy.

Other than that, no more specific ideas from me right now. Just linking to the support articles on FP3 charging and the FP3 battery.

ok i can try this when my akku will get totally empty again! thanks!

unfortunately the battery kickstart doesn’t work either…
to be clear, the fairphone works fine, when i put a full charged battery inside, but it doesn’t charge itself, but if its also not the bottom module… so my friend with the same phone is charging the akku and than we swap. not a long term solution. has anyone an idea what i can do? I think it could be the cable from the bottom module or other soldering point in between. any experiences? any idea how i can get this parts or is there a good repair shop in VIENNA you can recommend?
no answer from fairphone support till now…

unstable when charging, sometimes it would charge, and sometimes not OR just very slow

That might indicate a problem with internal contacts between modules. If so, the best thing to do is to get out that little screwdriver that came with the phone, and disassemble the phone following the iFixit teardown and then clean all the contacts of the modules (but especially bottom module and motherboard and also contacts of the battery emplacement and of the battery itself) using isopropyl or very high-grade medical use alcohol (90%).
[Edit: use a cotton bud and leave plenty of time to dry, even if it’s alcohol: 3h]

The Vienna angels already signalled above may be able to assist, if you’re not very confident - or go along to that meetup mentioned by Urs just above

it was unstable when charging, sometimes it would charge, and sometimes not OR just very slow. so I would plug in an go to sleep, and next day i have just 17% or so. i changed the cables and then it would go again for some time.

The same thing happens on my Fairphone 3 (which is 3 years old). A few months ago it started not charging sporadically (I would leave it plugged in, and after half an hour it hadn’t charged at all, despite showing the charging LED), so I started to check and sometimes I had to unplug it and plug it in again a couple of times.

I have always used the original Fairphone charger and cable. Since I’ve had the problems, I’ve tried different cables and chargers (of good quality and some new ones), and I’ve had the same problems with all of them. I’ve also tried cleaning the contacts with a brush, removing and connecting the battery, SIM, SD… and yesterday I updated the firmware in case it was a software problem, but it’s still the same.

That might indicate a problem with internal contacts between modules. If so, the best thing to do is to get out that little screwdriver that came with the phone, and disassemble the phone following the iFixit teardown and then clean all the contacts of the modules (but especially bottom module and motherboard and also contacts of the battery emplacement and of the battery itself) using isopropyl or very high-grade medical use alcohol (90%).

Maybe it’s what @OldRoutard says. I’ll try to get the materials and clean it, but first I’ll try to make a copy of everything I have on the phone (I’m working on it, because I was thinking of factory resetting it to see if that solves the problem). If it doesn’t work, maybe I’ll try to buy the lower module, which is what I had in mind in the first instance… but seeing that it didn’t work for you, it discouraged me.

Thanks to all of you who suggest solutions and try to help!

Same symptom with my FP3+ for some days now. Phone is about 1,5 years old (/e foundation). Using original fairphone cable. Sometimes charging led switches on after plug off, turning the cable, plug in again. And no, phone doesn*t get hot. I did not do any action to take a look for the reason, but now found this threat …

I am currently experiencing the same issue where no charging is taking place:

Have installed a new bottom module but the problem persists.

Also swapped in my partner’s FP3 battery to test if it was the battery: problem still persists.

What would you recommend as a next step?

Hello, welcome to our community forum.

I moved your post here as the “symptoms” seem to be the same here and this topic is more recent.

Thanks! where is it? maybe i can join!

thanks! i will do that. my friend is a electrical engineer and will help me with that this weekend. i will let you know how it goes. fingers crossed!

these are exactly the symptoms i experienced with my fairphone 3. I have it 3 years now.

Have a second look

address (with map button) almost at the top in my link.

The same for me since a few days… The fp3 charges but very very slowly (18% → 45% in two days) but starting to 45% it charges normally (less than 1 hour).
I order a knew bottom module but I don’t believe in a hardware problem…

Hi and welcome. I would tend to agree that it is probably not the bottom module. The chip that defines the charging rate is on the core module.

You could ‘calibrate’ the battery to ensure the charging algorithym has a grip on the here and now so to speak.

Calibration requires a full discharge and a full recharge, something you may not want to try.

So here’s an update on how I “solved” my problem (thanks to @OldRoutard advice!:

After getting some isopropyl alcohol, some cotton buds and a suitable screwdriver, I opened the phone and cleaned all the contacts. Although the problem was apparently solved after that, there were a couple of weeks where the charging was still unreliable (it switched from slow to fast several times, and sometimes didn’t recognise the charger); however, it charged much better than before the cleaning (as where at best it would only charge 15%/20% in 8 hours). Now, and for the last two weeks, it detects the charger and it is charging perfectly… let’s see how long it lasts like this

P.S. I bought some covers for the USB-C port, to prevent any more dirt or moisture getting into the contact from now on. I hope this will extend its lifespan. 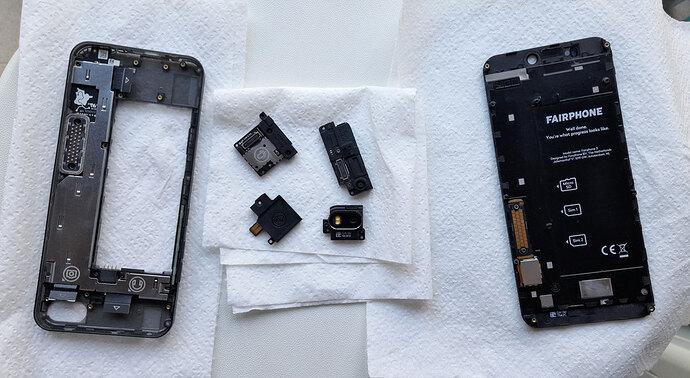 One of the main problems I had during this process is that, as I had to open the phone other several times, I have several stripped screws, and it was very difficult to open it. Do you know where I can buy the screws for the Fairphone 3? It would be ideal if they sold them in the FP shop.

By the way, a few days ago the screen wouldn’t turn on properly when unlocked, it was at a much lower minimum brightness than the normal minimum brightness, and the screen was flickering. After fiddling with the phone and tightening it I managed to get the screen to work normally again, but this happened many times on that day… I hope it’s nothing serious and it’s simply because the screws are not too tight… but the truth is that I’ve had a few problems lately with my Fairphone 3

thanks! i will do that. my friend is a electrical engineer and will help me with that this weekend. i will let you know how it goes. fingers crossed!

@Lena_Ka, have you been able to solve your problems by cleaning the port too? Or have you replaced it completely? I’m thinking of doing it if it fails again, but I’m afraid that I won’t be able to open it because of the problem with the screws…

Do you know where I can buy the screws for the Fairphone 3? It would be ideal if they sold them in the FP shop.

Here is a thread with the same topic and some hints:

Hey! I just opened my phone up to fix a simple connection problem, which I did successful. But then when I screwed everything back together, I went a little hard on screwing one screw into the hole and “Over-screwed” it a little bit. Nothing is damaged but I would to know if someone can tell me if I can buy replacement screws for myself and if there any information which especially I need to buy (length,…) if I want to or better, if I have to. I mean just don’t over screw it but if it happen…

Thanks for getting back with your news, and glad your phone is working again!
Thanks also for the hint about USB port covers