That’s what I’ve heard from one of the employees (don’t remember who).

Hey,
I think I am facing the same problem. Did you figure out how to solve it?
I already had both scenario. First the USB port was the problem, so an IT guy fixed (this time the red light is on, when I plug in the cable (also tried different cables). And the battery should be also okay, I had 3 month a go a bloated battery and replaced by new one. Spin test is negative.
I am getting crazy I am charging for the whole day and it stays at 20%. When I turn it off an on than it has only 13% and suddenly 22% again (but not more…) . I really need this phone, it makes me °!§$%&$.

Hello Malin,
my fairphone works again but it’s not how it should be. In Vienna in a mobile phone shop they repaired the USB port but now the cable isn’t really fix in the port when connected, so I can’t really use the phone while charging. I also ordered a new battery after I didn’t hear from the support for weeks (they answered my question about 2 months late!) because mine started to bloat again (I got a new one after I had a bloated one only one year ago!). Actually I don’t know exactly what solved the problem with the battery status, I tried too many things to fix the problem. But I think it was because of the fixed port and the new battery.

I was really displeased with fairphone and how they treat their customers, they didn’t help to solve the problem. I paid a lot of money to fix my phone and I’m sure it’ll break again really soon. That’s why I decided not to buy a fairphone when it comes to buy a new phone…

PS: Do you already know the Austrian Fairphoners?

I don’t remember how much exactly I paid but it was about 35 or 40 euros (actually the nice guys from the shop in Vienna repaired the port again after it wasn’t working well - but fairphone should offer such repairs for free cause it wasn’t my fault). Plus the new battery, which was about 20 euros. Plus a new back cover, which was about 10 euros. Plus shipping which is really expensive. This makes about 70 euros that I had to pay for repairing my phone, plus the bad support = this makes the fairphone 1 really really really expensive! So, next phone won’t be a fairphone (and I think the 2nd fairphone is way tooooo expensive if it has similar problems).

Hi! I am also experiencing some difficulties with my battery status for the last couple of weeks. The battery drains way quicker than what I’m used to (10-14 hours easy) but now most days I’m out of battery before lunch. It’s not the battery itself though that is the problem. I tried the battery reset and I got nearly 34 hours out of it! Problem is that it worked for only one day. The day after I experienced similar problems as before the reset. Another thing it does: it drains very quickly but when it says there is only 1% left, it keeps on working for hours. It must be a software related issue, right? Might a hard reset work? Any ideas? 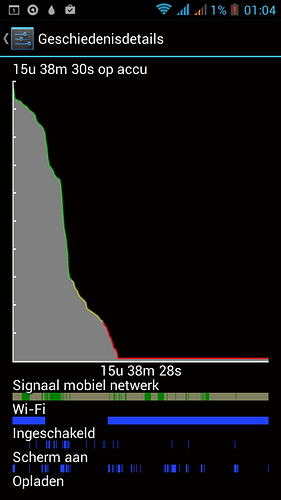 How old is your battery? Have you checked if the battery shows signs of physically bloating? (Put it flat on your desk and try to spin it to find out if there are hardly visible signs of bloating)

It’s from late 2013/early 2014. It always had some troubles with the battery status but usually that was fixed after updates. Did the spin test, seems to have no bloating.

I don’t know how often you charged it, but I would say your battery might have just gotten near the end of its life expectancy.

In may I got a new battery, let fix the charging port and now? THE SAME PROBLEM AGAIN! I’m tired of fixing and fixing and fixing my phone. That’s why I’ll buy another one which simply works without having to make it work all the time. What a pity!

There has to be at least 1 year of warranty on repair jobs. If they did not properly fix your phone, they have to intend it again.

The problem is not that the people of the shop didn’t repair the phone properly. They did their best and I was really grateful for this. The problem is, that the FP1 came with lots bugs and defects. I have my third battery and have battery charging problems again. I don’t even know exactly how to fix the problem because I tried so many different things. Somewhere on the fairphone page I read that wrong charging indications mean that the battery is starting to breake and that one has to replace it. I’m not willing to buy a fourth battery only half an year after having purchased a new one. I won’t be in Europe for half a year and won’t be able to fix my phone abroad. That’s why I will have to throw away the fairphone, mostly because of factory-made issues and bad support. I need a phone that works and when I bought the fairphone there was no word by them about having to fix the phone all three months without getting any support how to. That’s why I’m really really really disappointed.

That’s why I will have to throw away the fairphone

I can understand that you don’t trust the phone any more and want to get rid of it. There is still a lot of demand for FP1(U)s and their parts. There’s been mention on the forum that Fairphone has been buying back old FP1(U)s (you’d need to contact support - note that they are a lot faster than they were a couple of months ago) and judging from the unofficial marketplace on the forum, you should also be able to sell it without going through Fairphone support quite easily (but please be honest about the repair status).
Anyway: throwing it away is a waste for you, the people who need parts, and the environment.

only half an year after having purchased a new one.

Could still be in warranty. Probably good to mention if you’re selling.