This is either the oldest or the newest FP2

I’m not sure if my phone is to be minus 1 year, 11 months and 20 days. Or 1 year, 11 months and 20 days. So it is either not existing yet or older than FP2 itself.
It is my second phone as my first had just too many random reboots. So I’ve only had it for a week or so. Every day the number of days increases. I’m curious to see what happens in ten or eleven days. Will it be zeroed out? will it be minus two years? will it be plus two years. I’ll keep you updated.

We saw this a couple of times already

(here, here, here and the record)

I also tried to change /persist/board_date.bin, it works well if you have a rooted phone and a bit knowledge of the linux shell.

Please post a screenshot (VOL- + POWER) of Hiccup, there you can see your board date. (Settings -> Maintenance -> HICCUP).

Thanks for the reply retsifp,
I don’t have a rooted phone. I must admit that it is not a big issue for me. As long as the phone isn’t random rebooting all the time I’m happy. This is my second phone. The first was too annoying with at least one or more RR each day. This one has been better. Only four RR since I got it a week ago. 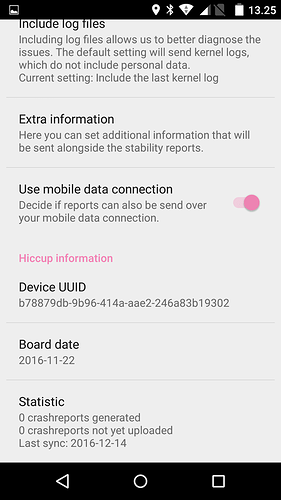 Hey, it is the same for me, same manufacturung date, I think Fairphone needs to tweak their lockscreen widget in order to fix this.

But the same here: all my random reboots disappeared with my new phone!

Hi Donsemann,
None of my business really, but I was wondering if you always have wifi, bluetooth and location on?
Maybe you have and need them, or maybe you happened to have them on at the time you took booth pictures, but if you don’t, you might want to turn them off when you don’t use them to make the battery last longer.
Sorry if it feels like an intrusion, it just struck me when I looked at the pictures!

No worries, no intrusion. For the most part I use these features. I just have to live with charging the phone more often.

Sadly for me the random reboots have not disappeared. I just had two RR within ten minutes tonight.
I think there should be a possibility to change things on the lock screen. What about instead of saying how long you’ve had the phone or how long you’ve had pease of mind it said how long it is since you called your mother. Or how long ago you had a random reboot. That would at least show some sense of humor.

Update: after the latest OS update 1.10.1 there has been no more reboots.
New update: The random reboots came back. I repaired my old iPhone 4S and will give the FP2 a break for now.

Hi, i’ve got the same problem on my fairphone. Any idea to fix it ?

Did you update your phone to the latest OS update 1.10.1?

I’m using Facebook. It works fine. But, yesterday I had the first RR after the latest OS update 1.10.1. That was a little while after using Google Maps just to test it.

Hi everyone, I recently received a new FP2 since my first one was completely buggy and kept rebooting by itself. The new one is working perfectly, a real pleasure. But on this new FP, the date indicated on the lock screen for "your own this fairphone since..." is not correct. Actually the time is in the future so it's quite weird, and of course the date is not link to when I received my first FP2. Is there a way to modify this date? Even it's quite complicated? I know its base on the date/…