The price was 6,13 € !!! So what did you expect ? As for smelling cheap, just spray it with Chanel nr5 or another expensive perfume.

Thanks for the tip!

As I said, it was cheap so I’m totally ok with it!

I am very interested in the AliBaba/AliExpress flip case as mentioned by @olga, @Baaje and AlexD and I want to buy it.

Unfortunately, I don’t have (and don’t want) a credit card and can’t use any other payment method accepted by AliBaba/AliExpress. (A pre-paid credit card is not accepted.) I do have PayPal, but they don’t accept that either.

The seller states that it does not want to do a trade outside AliBaba (which I can fully understand, cause it’s kind of against the rules), so my only option is to reach out to the wonderful FairPhone community:

Is there anyone here who can buy it from AliaBaba and have it sent to me? I am willing to pay extra for the use of the credit card and cover possible customs and other expenses. I am also willing to pay in advance. (Through PayPal or, if you live in the Netherlands, through an ‘overboeking’)

The FairPhone has been on my wishlist for many months and I finally ordered one yesterday. I have a very similar case on my 2-year-old budget HTC (600mHz single core, woohoo!) and I love the practicality of having all important cards close by.

I hope someone can help me.

P.S. my apologies if this is off-topic (I am new here), but I couldn’t find a better entry for this question.

Of course, I’ve only had it for a few hours, but I’m already really covinced.
Not only the sleeve looks very nice, it also feels very sturdy (being made of thick patches of leather and felt)
But what attracted me the most is that Kancha works along the same values as FairPhone, as documented by their story page:

I think Fairphone could set up a nice partner ship for Fairphone branded pouches, if they wanted to …

For pictures and photo’s of the pouches, head over to their shop.
Shipping is “green”, fast, and included in the price for the EU and Switzerland & Krygyzstan (in case you happen to live there).

Never mind everyone, I have found someone in my own network who is willing to help me.

I bought a black leather flip case from Krusell. Fits very well, only the volume button has a corner hidden. It is a snug fit, but as it is leather it adusts.

I only found this because someone had reviewed this: http://www.pdashop.be/product/426201/kiruna-flipcase-sony-xperia-z1-compact-camel.html

Hope it helps someone.

I recently bought the flip case from Ali Baba. It fits really good, and does the job to protect the phone, but the leather is rather poor quality, mine has already got small cracks/holes in it (although probably what to expect, since they were really cheap). They have two different cases for FP, one slightly more expensive where the leather should according to the product information, be better quality. If I should buy a new flipcase, I would probably go for the more expensive one, it is still affordable.

one more vote from me for the Sony Xperia Z1 Compact FlipCover Kiruna. a leather flip cover, fits very nicely with minor glitches that are unimportant to me: on the front, there is a slit for the ear-loudspeaker which is not matching the phone’s, the cut-out on the back for the camera is in the right position, but with a different shape (does not affect functionality), and the volume down end of the volume button is covered by the leather (but you can use it, just push on the leather - additionally, i could imagine it to be fairly easy to cut the leather away for a mm or two and free the button).

on the plus side, it looks beautiful and feels good (Swedish design in genuine leather…

(p.s. i discovered it thanks to Sarah’s review - thank you!)

I am using a Krusell Malmö flipcover for Sony Xperia Z1 Compact that fits the fairphone nicely. It does however partially cover the volume button but it doesn’t press on it or anything so I don’t mind. It is nice quality and swedish design. There are several colours available, I ordered the white one at Smartphonehoesjes.nl but I know you can get it elsewhere as well.
Posting it here in case it helps anyone. It took me a long time to find a proper case.

Thanks Sara, csant and Kati for the reviews and tips about the Krusell cases. The case from AliExpress that I bought in November (and posted above) functioned fine, but looked terrible after a while. So now I have bought a Krusell Malmö flipcase. As mentioned before, the volume button is partially covered, but you can adjust volume by pressing the button through the leather. That works even when the case is closed, which is great.

Bought my third party case at shapeways. Mostly because I don’t like the design of the original cases and I wanted to protect the display a little more.

Case fits perfectly, looks smooth and has a nice grip.

What I like most is the fact that the case protrudes over the display glass surface – after smashing my display twice using the original case I hope this will add a little protection to my dear fairphone. However, that protruding case makes it difficult at first to use the fairphones Quick Access App.
But no worries: After one day my thumb movement adapted and now I don’t think even about it.

The headphone jack as well as the charger-connection are much better accessible than with the original.

All in all: Great!

sadly, I’ve not had a great experience with the Krusell case. I bought it in March, and loved it instantly - finally my phone had some protection!

7 months later, though, and it’s completely coming apart. I would say I use my phone a moderate amount, and am not particularly careless with it. So I don’t understand how the case has got into this state in such a relatively short period of time (or is this normal?! I’ve not used a leather flip case before) 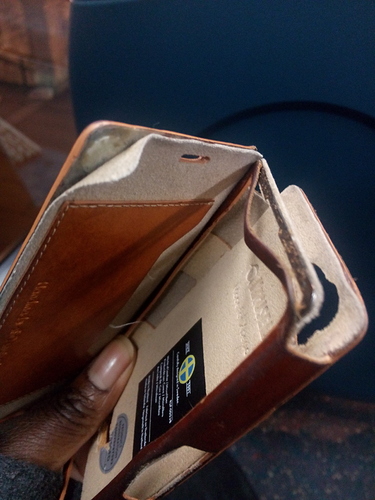 Wow! What did you do to it, wasi? It looks like you put it through the washing machine. Did it ever get wet?

I admit up front though I have no experience with leather flip cases, but I have had leather wallets for years and they get just as much use as a mobile phone, if not more. My current wallet is beginning to show signs of wear now after about 3 years. The difference is that my wallet is all stitched, no glue like your case seems to have.

Could you have done something to it that caused the glue to give up the ghost?

I just took delivery of the Malmo and it is completely the wrong size. Are you talking about the FP1? If so, the Malmo is too thin, and too wide - I’m going to send it back but I am wondering if it is worth ordering the Kiruna, or if the fit is equally terrible.

It really does look like it’s been through the wars, right?! But I honestly
didn’t stick it in the wash, or anything else of the wet variety - though
living in London, there’s no doubt it’ll have got some rain on it at some
point.

I second your ‘leather wallet for years’ - I really don’t know what’s
happened with this. Maybe, as you say, it’s linked to glue-not-stitches.
It has made me long for just a simple slip-on case that protects the body
without too much fuss [but not in the hard plastic material of the 3D
cases] - basically a softer, rubberier version of those!

Thanks everybody for sharing their experiences. I like the Krusell Kiruna case but was wondering about the speakers on the backside. They seem to be completely covered by the case, right? How much does it impact the sound? or did you cut a hole into the leather? I wouldn’t like messing with such a well-designed product but use my phone to listen to music without extra speakers, so this function is quite important to me.

Are the standard cases run out again, I’m not sure they were available when I got my phone at all… I bought a 3d printed case but it shattered so I’d really like a fitting regular case, I don’t know if that’s what the standard cases are like? Rubbery would be good. Thanks!
Mine is an fp1 second batch.

There are still quite some FP1 users out there, so I’ll update this thread:

Even though my old case was still fine (even though the black has faded to something more blue-ish), I finally bought a new case by shapeways – roundwithgap – that has a little extra feature: the custom-made case now has an additional gap/notch so you can use the Quick Access App more easily.

I’m totally happy with it.

I only registered on the forum a while ago and have read most of the posts on the thread for this concern. The posts have been helpful in understanding the situation for FP1 cases, however, my problem remains.

I had bought a 3D printed case last year and has been chipping off little by little with not-so-serious falls. By now, it is almost like a sliding case for my phone and hence my phone is in more danger with the case than without it!

I am now looking for a silicon/rubber case for my FP, which obviously is not available anymore on the web shop

So, I set out to look for third party cases but no such case seems to be available. Do you know anywhere I could find a silicon or rubber case for it, or a case for another phone that may just fit.

Another option I thought of was to buy a second hand case from someone in the community who is not using the old rubber/silicon case anymore for whatever reason.

I am moving back to India soon and so it would be great to have a case before I leave!