Yes, the uppdate file was there in cache and I installed it. Now the phone is doing something, maybe it’ll work out. Now it’s stuck on the picture “Fairphone Change is in your hands” with the blue spots moving from left to right.
I’ll see if something change in the next half hour and get back to you.

Thanks a lot for your fast reply anyway!!

Well just to specify. I first tried to install the uppdate file that was under cache and I got stuck again directly in TWRP. Then I clicked on something else (can’t remember) and installed it again.

Ah! And now it worked. I’m back to my phone. Thank you so much! It’s stupid but I got very dependant on this little machine…
Have a great day.
Lou

Hm. Did you perhaps clear the cache or something in between the attempts? Would be interesting to know what solved it.

Well unfortunately I don’t remember. I hope it never happens again but if it does I can write it down so I’ll know for the future and be able to share my knowledge with others, stuck in the void of TWRP!
I know I followed those instructions (Install” in TWRP’s main menu, then navigate to /cache by tapping “(Up A Level)” and “cache”, and hope fp_update_gms_whatever.zip is still there to select.). When I had selected this file, there were two boxes I could click and I clicked one of those. Unfortunately I don’t remember what they said. Something about rebooting the system. And then it worked and the phone rebooted and the update was installed.

I’m sorry I can’t help more. But hopefully this can guide a bit some others.

I have spent the last week struggling with the latest update and found this thread extremely helpful. I also had the problem of the computer not seeing the FP2 during the manual upgrade. However I tried various leads and eventually one worked (I’m guessing although the leads work as chargers not all are data cables?). Hurrah phone alive again.

I’m having a similar Issue. Some Months ago I tried updating the Phone and it failed, letting me get stuck in a TWRP screen where nothing loads nor anything changes until I take out the battery and set it back in, in which case the phone reboots normally.

Some days ago I wanted to wipe the phone using the normal android options tool, but it got me stuck at the same place. That screen looks like this: 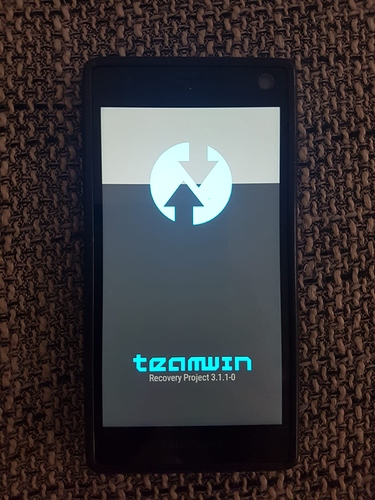 I have a Fairphone 2 that has been running fine for a year or more with Android, not sure what version. I got a notification that I should update to a newer Android (again, can’t remember the number) and said ok. I didn’t think to create a backup beforehand.

The update started ok but then it crashed and the phone went to the ‘Team Win Recovery Project’ thing (I didn’t know this was a thing before last week so please explain everything very slowly in your answers, I’m a total Fairphone novice). I tried rebooting (using the ‘reboot’ button in TWRP, the power button for 15 seconds, and taking the battery out) but it restarted into TWRP again. I think I tried a couple of the other things in TWRP but didn’t know what they really do (I can’t remember what I tried now because this was a few days ago).

I think I need to wipe the phone and reinstall the OS but I don’t know how to do that and I don’t want to lose everything on my phone. I’m not really worried about photos (they should all be backed up on Google) or music/videos (I didn’t have any), but I would be really sad to lose my WhatsApp chat history as it has some personally important stuff in there. I had turned of the Whatsapp automatic backup (yes, stupid of me, I know) so now I don’t know if I can recover it through the TWRP thing. My battery drained super quick in TWRP - even plugged into my computer it went flat in a couple of hours!

So my questions are:

As I said I’m a total beginner at this so please explain everything very clearly without jargon. Thanks!

If I do this will it wipe my whatsapp history? I would really like to back that up before trying anything else.

If I do this will it wipe my whatsapp history?

The procedure I quoted should just install the update file (if it is still there). TWRP should have done this automatically, but perhaps got somehow stuck.
Installing an update file shouldn’t affect user data, but you are right to be cautious.

I would really like to back that up before trying anything else.

I don’t use WhatsApp, so I don’t know where it stores its history.
When in TWRP, you can connect the phone to a PC via USB and have a look at Internal Storage and the SD card (if there is one and it is configured as external storage) and copy stuff over to the PC.

When in TWRP, you can connect the phone to a PC via USB and have a look at Internal Storage and the SD card (if there is one and it is configured as external storage) and copy stuff over to the PC.

I have it connected to my (Ubuntu) laptop right now but it hasn’t popped up in the filesystem like it usually does.

I can’t say anything about Ubuntu (or Linux in general) in this case, but TWRP uses the same connection mode as Fairphone OS (or any Android OS) does for the connection. It’s called MTP. So if it worked before …

Do you have a Windows computer in sight to try?

Do you have a Windows computer in sight to try?

Not really… I have an old one in a cupboard somewhere but installing all the security updates would probably take days!

If you happen to have #fairphoneangels in your vicinity, they might be able to assist you in person.

Ok so I tried this. It said something about error code 7 and an issue with the zip file (hard to memorise the error messages in seconds, can’t take a photo because my phone is dead

) and asked if I wanted to reboot. I said reboot and it said ‘are you sure? no OS installed’. I said try anyway and it rebooted to TWRP…

… Quote: “The user data will not be erased.”

Yay! I think it worked! Thanks for all your help!

So sorry Lou. I had the same thing - I just turned on my phone 4 weeks ago - and instead of the usual start up TWRP 3.1.1-0 came on. A total mystery, no idea what it was. With no guide available I scrabbled through the virus’ options but ended up wiping my phone, back to factory settings, all data gone, valuable photos, texts, contacts… I found a Google back up recovery - and got back my contacts and some photos (no idea how they got them…) It all seemed to be back to normal.
On 3rd October it happened again The Team Win virus. Again, no escape, so I ripped my sim card out and put it in an old Samsung phone I’d grabbed as back up. Sorted!! OK lots lost but I had most recent contacts in my Filofax…
Lesson? Don’t use my Fairphone2, use the button phone instead (with no internet), use a camera for valuable photos - and write down vital contact numbers.

Another Elk… I I know that name from somewhere…) - would the fairphoneangels be able to help delete this TeamWin Recovery Project VIRUS?? Well what else is it but a virus?? I didn’t install it, it’s hi-jacked my FP2 phone, caused my data (texts, photos contacts) to be deleted.
My FP2 is now dead and flat due to the thing. I HAD to make a phone call 3 days back when the TWRP virus hacked my phone. Being the second attack, I’d taken my old tough Samsung as back up. SIM card ripped out of my FP2, into the Samsung, turned on - and call made - I was up to date on the status of my recently dead brothers burial dispute - and I was in my van and driving 10 minutes later.
My FP2 is DEAD until I find out how to block this virus. - OR someone posts instructions on how the damned thing works before it destroys another phone.
Anyone know anything?

TWRP is the recovery on the phone and therefore an important part of the software. If you end up there it was either an accident (e.g. you pressed the volume up button during booting) or something is wrong with the software and the operating system couldn’t load, so the phone booted into recovery instead.
Next time you end up there try to just tap on “reboot” and then “reboot system”. If that gets you back into TWRP again instead of booting the phone normally see if your volume button might be stuck and then try again. If it still doesn’t work try manually reinstalling the OS.

3 Likes
TWRP or similar available for FP3?
next page →