Since the last update, the brightness sets itself to the minimum setting about 2 times a day. I have to manually set it to a higher value. If it works fine after a week or so as said in the article, nice. If not, I consider this a bug. Adaptive brightness has been a feature of phones for 10 years or so, and now I have to turn it off?

If this app is not installed by default on the FP3(+), is the “self-learning” adaptive brightness feature available at all?

I don’t have the Device health Service app but the adaptive brightness works fine, it took a few adjustments yesterday evening, will see what it’s like this evening.

Yeap! It’s playing up again as the light dims. The sun has nearly set but it’s still light and the screen keeps going to the lowest setting possible I imagine as I can hardly see a thing ??

It seems the sensor is overly sensitive If I have just a bit more light it’s fine.

I can set the brightest to 60% and move the phone to slightly darker situation, like another 2 feet from the windows and the screen drops to almost black ???

Adapting it is but reacting too much and not responding to a minimum setting.

OK I have to put the phone in a shaded, (no direct light) not a dark position, and it drops to zero so I have to keep the level control visible and tap it to 60% a couple of times.

Yeah, this backlight thing is buggered. It keeps dropping it to 0 while I’m using it. Increasing the backlight back up doesn’t help because it will randomly decide to darken it again, I’ts not like the light levels is even changing very much

Well as in my last post it now seems to be OK. Maybe it is just a learning curve, but still not expected or wanted.

To be honest, the display brightness adjustment of the FP was never good and now it gets so dark automatically that I cannot see anything while using the phone. If I higher the brightness is does not remember to which value I did put it. It is constantly brighter or darker, not a nice experience.

I think this may have caused my phone to randomly ‘go dark’, i.e. dropping to the absolute minimum brightness with the result that I suddenly cannot see anything while in the middle of writing an email for example. I have adaptive brightness turned on, and this seems to lead to some ‘confusion’ what adaptive means…

Yes, but the more important question is: If this app is not installed by default on the FP3(+), is the “self-learning” adaptive brightness feature available at all?

If I (on /e/, not Fairphone OS) go to Settings - Display - Adaptive brightness, along with the switch to toggle the feature on and off it just says

“Your screen brightness will automatically adjust to your environment and activities. You can move the slider manually to help Adaptive brightness learn your preferences.”

Edit: Screenshot thanks to @amoun’s quick reply below … 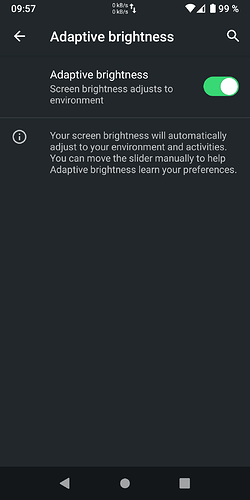 I don’t see anything installed resembling Display Health Services, I think this is just implemented in Android as is. The default behaviour might still be tweakable by Fairphone’s software partner, though, but I don’t know.

(I refrain from posting a screenshot, I don’t know whether it looks the same in Fairphone OS, and this topic is about Fairphone OS.)

It seems to to be the same on FOS

here’s the screenshot of the Settings > Display option

The top slider bar is only visible once I have tapped on the [Brightness level (64%)] This is the level I set to able to read well in the evening with a 3watt LED 2 metres away. Lower than this is not really much of an option unless it’s pitch black around me. 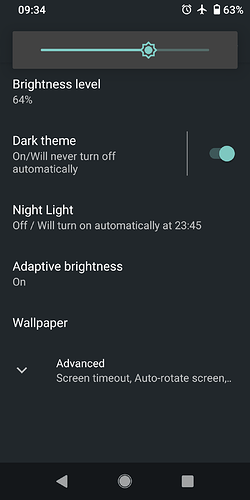 Yes, I just updated the other day (28 aug. and did both the system and the security update) and I notice this too. It randomly goes to “low” but also can go back to “normal auto”.

I bet it has to do with the new “minimum” - I guess “the history of learned settings” is reset? Things do seem to smooth out while I’m using it more and more now…

Some will call it a feature, but I call the behaviour (what I call the reset) a bug, because when you update the phone, these changes aren’t mentioned, therefore: unexpected behaviour.

Some will call it a feature, but I call the behaviour (what I call the reset) a bug, because when you update the phone, these changes aren’t mentioned, therefore: unexpected behaviour.

Yeah, let’s agree on unexpected behaviour, which nobody wants to have.
I’m afraid the lack of a detailed changelog for the updates or an issue tracker doesn’t help with this.

To me it seems like the sensor restarts all the time. You can set it to 10% all you want, after a few minutes it goes back to 0. Very annoying. Only does this in fairly dark circumstances.

Only a developer will know the reason why the basic brightness can be so low that the controller can no longer be recognized after a restart?

Hi @fpdream Welcome to the forum.

RE Your comment. The developer who worked on the procedure may well be the most enlightened on the issue but many other people with a decent software ability and time on their hands may be able to understand.

But it may not be that simple even for the developer of the procedure to work it out.

Hopefully it is just a learning issue and will all be fine in a few days.

Thanks for your input.

I look forward to an official answer. For me it’s a software bug.

a) it is reading zero when I can still read without a light
b) the lowest setting I have is ignored and the screen is darker than the piece of paper next to it.

Will try and set the value via the slider, again. Ok I have set it at 41% will see what happens.

@aboloo I have the same issue with the brightness.

Yeah, I also want to +1 this. I have the same issue since the last update.

When ambient light is low, screen brightness used to reduce, now it immediately goes to lowest setting.
This happens already in a lit room. It makes the screen barely readable.

Just to add It seems to occur each morning and each evening. When the ambient light goes beyond a certain level (and inappropriately reads zero) the screen light drops to zero.

Although this has occurred since the latest update it is a clear single issue and am starting a new topic.

I have the same issue. With low ambient light, the display backlight sometimes gets turned very low (too low to read) now. After some seconds to minutes, it will turn back normal.