What we got is something that is labelled “Security patch level 2021-06-05” because that’s what Google thinks everyone should call it.

That bit I agree with, what I find odd, as @Amber has said, is that it is misleading.

It’s stated that Fairphone and other vendors get the update at least 30 day before it is publicly released.

So Fairphone were provided with this 30 days before they pushed it to the networks, which was 28/29th May.

This means the security issues that were addressed were from 30 days before that i.e. the end of April.

Am I missing something in thinking calling it a June update is a bit misleading if it only has security updates from April 28th at the latest.

You have two ways to date such an update : you use the date you created it or you use the estimated date it will be published. Google chose the second one for the security patch.

That could make sense but it doesn’t as
a) in the first case it is created in April (given it is at least 30 days old when Fairphone get it (28th May) So that’s an April release.

b) there’s no estimated date Android always release on the same date the 5th of the month. However the published date is usually just before the patch update ??? 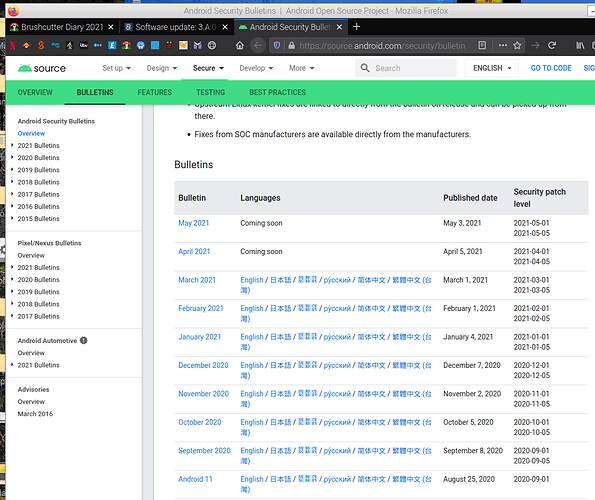 So why not call it the may 5th Update and then the vendors have to verify it.

Not all vendors have the same capacity so some will release it before others but the update is the April security patch and some vendors may release it way down the line so 5th June is a bit random if your second option was the likely reasoning.

That bit I agree with, what I find odd, as @Amber has said, is that it is misleading.

Hmm, I just said a german IT magazin said they get it about (=approximately) one month in advance to clarify why the release we got is an official release from Fairphone and nothing hacked as it was believed e.g. by @soeren_h before.

Maybe it is not exactly month in case, despite the magazine told, maybe it varies from month to month according to release fixing of Google and other contributors. At least it seems that it is not exactly 30 days or something fixed as @Ingo showed.

Google releases something labeled as FULL patch (as indicated by yyyy-mm-05) and mm means the official release month and 05 is the day some time in advance to the phone vendors to let them implement it.

Maybe it helps to just think of it as a release number (that by chance looks like a date)?

What is so important about when the version is created as long as there is a clear scheme to identify the monthly updates? These labels are meant to have the level of “updatedness” be comparable among all manufacturers of Android smartphones. Would it really help if Fairphone called it “2021-05-30” and some cheap phone has their “2021-06-04” today which turns out only contains the fixes Fairphone got in their “2021-04-28”? And how would you know which of those version was released without vendor patches?

What is so important about when the version is created as long as there is a clear scheme to identify the monthly updates?

It’s not important for the phone’s security just would be nice to communicate the facts otherwise they as well give them names of flowers or animals. rather than the sugar laden names given to the Android main versions.

Fact is: A phone with patch level June 5 has all patches which were ready for official release in the chosen release format as of June 5.

I read through all this now and I still don’t get what the big idea is why this would be some kind of a problem.
(Admittedly the “I still don’t get” part could be on me.)

otherwise they as well give them names of flowers or animals.

I think you will agree that a date gives a better indication of how recent a patch level is, regardless of how the parties involved get to this date, as long as it’s not totally random or a totally different process everytime, which it isn’t.

Apologies for going on about this but a patch level dated June 5th that only has security updates until the 28th April is misleading, albeit not a ‘big idea’ or ‘problem’ for me and absolutely no problem for the phone, it is standard practice. (to be unclear, mislabelled, misrepresented, misleading, and generally devious ~} it’s the nature of intellect to fantasise, dream and conjure up and paint a future but it’s still the past and I would appreciate not having my future defined, even if it’s more scary.

And the 5th of June will be here soon so dreams do come true, well maybe, will have to wait and see.

@amoun this is going in circles and repeating will not change anything. I think we all understood that you dislike this, still it is as it is

It won’t have security patches until April, 28th only as there are not daily security releases, but monthly releases. This monthly patch cycle, currently labeled 2021-06-xx is delievered a few days before the official name indicates to the phone vendor. If you got 2021-06-05 you got the full patch set.