This has happened twice now. After a reboot all my web shortcuts disappeared. Also shortcuts to Drive files and WhatsApp groups and Box folders.
The second time I’d just installed a new app. I can’t be sure if I’d done the same the first time.
Very annoying!
I use Ecosia browser.

I use Ecosia browser.

And which launcher?
What about PWAs?

Hi there,
Sorry but I don’t know what you mean by launcher. And just had to look up PWAs - if I understand what they are correctly then they disappeared too.
I created the web and PWA shortcuts by using the “Add to home screen” option in Ecosia (which is based on Chrome). I added the Box and Drive shortcuts by adding a widget from the “right-click” menu on the Fairphone home screen. I added the WhatsApp group shortcuts using the “add shortcut” option from the group in the WhatsApp application.

Hi Launchers are the main interface you see when you turn the phone on.

I used Nova Launcher to get rid of the Google search bar for example.

Here’s a topic on Launchers It’s an old topic and only really useful to give an indication of how many there are and what they do.

For example the content about Nova Launcher may have been true a long time ago but it was ‘perfectly’ fine with my FP3 using Android 10 and now 11.

Thanks amoun! I assume I’m using the default one for FP3 because I never consciously installed a different one and I have the Google search bar at the bottom of the screen.

And if you rearrange icons, this keeps rearranged after reboot or not?
Or if you place new apps on start screen?

App shortcuts haven’t been affected at all. And to clarify, it’s only happened twice so far. I started testing after the second time and it’s not happened since despite a few reboots.
I suspect I might have installed a new app before the two times it happened so I’ll do some tests.

Well, no idea about this. I installed an app called Dots, rebooted, all fine. Then uninstalled it again and rebooted. All shortcuts still there. If it happens again I’ll try to note what I did just beforehand.

My shortcuts from Google Maps and from Google Addressbook were deleted twice now, after reboot.

This is very annoying!

It started after upgrading my FP3+ to Android 11. I am using stock Fairphone 3 Android, without meddling with launchers and such. - Everybody else must have the same problem, I guess?!

@el_foz: What is that “Dot” app? In Android Play store, there are only games with this name.

Note: This is about shortcuts. A shortcut is an icon on the home screen, but it is not an app starter, nor is it a widget. It’s a shortcut. Some apps allow you to create shortcuts, e.g. the addressbook: with a shortcut you can call a particular phone number with a single touch.

Yeah Dot was a (pretty boring) game that Google Play recommended. I just wanted to install something to see if that would cause the web/drive/box/whatsapp shortcuts to get removed after a reboot. It didn’t. Neither did uninstalling it.

Yes, I can confirm that installing and uninstalling apps does not make the shortcuts disappear.

Generally rebooting is just a matter of powering off and on again, do you mean something else.

Yes, by “reboot” I mean powering off the phone completely by pressing the power button for three seconds, then touching “shut down”, or “restart”.

Why do you boot your phone that often?
A reboot is only for OS upgrade necessary

To check all is OK especially after installing some apps
For fun to see if the phone is happy
To swap SD cards
Play with SIM cards
Taking the battery out, checking if the insides are clean and if the battery looks healthy, not swollen.

I’m sure I’ll think of other reasons, after all the phone is largely a toy, not really just a phone.

OH! and as I have two FP3s swapping any of the above.

I don’t boot my phone often. But when I do, I don’t expect to loose things, like shortcuts.

Never lost one they seem to stick like glue, maybe they love me

But may happen as you see.
Try using another launcher

I remember to had this once or twice, too
On original OS with original launcher.
Changed, because of others reasons, to lawnchair and omega launcher, and it never happened again.

Now with iodeOS, these are all very old problems for me…

OK. Can you recommend a launcher that is similar to the Fairphone default launcher? Because I kind of like it.

Well I use Nova Launcher and never had an issue. I used it to get rid of the google search bar but there are other benefits

This is a Wiki Post. Everybody can edit it to add information. Hello, inspired by this Topic I thought a Topic where different launchers can be introduced to other users could be interesting. A Launcher is the program, that shows your homescreens, allows you to organize your Apps and gives you the possibility to place your widgets. Because this App can be changed like every other App on Android, you can simply change the look and feel of your phone by changing the launcher. Because everybody…

Nova via google, which I don’t use:

The premier custom launcher for Android, loved by over 50 million. 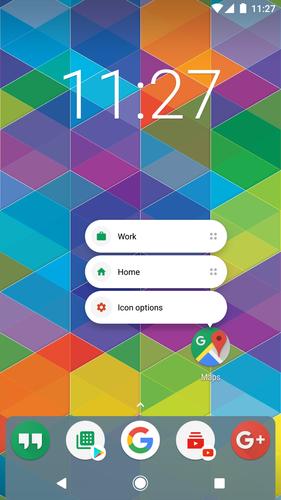