This post was moved from 24% discount on a Fairphone 2 (It contains 24mg of gold!)

I have had such a bad experience with this phone that I could not recommend buying it at any price. The bottom module has failed 2x in just over 30 months and I think fairphone should replace for free and it seems to be a design fault. The phone is sold as long lasting but it only is if you keep buying a new bottom module!! It seems impossible to contact Fairphone so I have been reduced today tto posting on social media and contacting consumer affairs programmes in the hope this will all be exposed. Loved the sturdiness of the phone, the twin sim ports, the concept, but all useless if it dosn’t work. Worse built in obsolescence than a standard smartphone.

This one from How To Keep Your Bottom Module Alive?

YES- I had one go, replaced under warranty, but now that one has gone also- impossible to get Fairphone to replace. From looking on line I suspect it is a design fault . I think Fairphone should aknowledge this and issue a fix, or redesign the module and issue one that works to those whose bottom module has failed. There are some suggestions on i-fixit involving putting tape under the module to raise the contacts but I have had no joy with that, it seems to be either buy a new part every year or so (including postage) or scrap the phone!!. Thinking of selling mine for parts. I bought through phone coop, I sensed that maybe this is a common fault, frankly I think it is a scandal this phone is still on sale as it is not fit for purpose.

This one from Tracking down microphone failure with Checkup app

How long had you had hte phone? I am really fed up as the second bottom module has failed and from looking on the internet I think there may be a design fault, do not be suprised if the new module fails also.

Just to say I have had the same problem. It seems to me there is a design fault, that in my view Fairphone should aknowledge and issue a fix. Seems to me a scandal they are still selling this phone when it clearly does not meet the stated description of longevity due to this fault. p.s. I had not problem with buying a new battery and case as that was wear and tear, but then for the bottom module to go again- very annoying.

Tip from @moderators: spreading posts with the same issue all over the forum doesn’t help anyone.

You know you have two years of warranty on hardware (except the battery) right?
So in 30 months you shouldn’t have bought more than one bottom module. If the first one broke down one day after the 24 months then you still have 18 months warranty on the second module.

Hi Paula, Sadly no, as they supplied the second bottom module under the guarantee they would not replace it when it went wrong as it was over the two years since I bought the phone. I guess if I had bought a module then I would have had two years, did not think of that, anyway I have lost confidence in it.

So still you only had to buy one bottom module.

I don’t really see what the problem is. Even if you had to buy a new bottom module every two years and let’s say you keep your phone for 6 years, that means you payed 580€ in total - that’s + 9% to keep your phone alive for a long time.
If you went with another company you’d have probably payed about 900€ for phones in the same time.

According to FP’s new Impact Report (PDF), the bottom module is the part that failed most often in 2017. 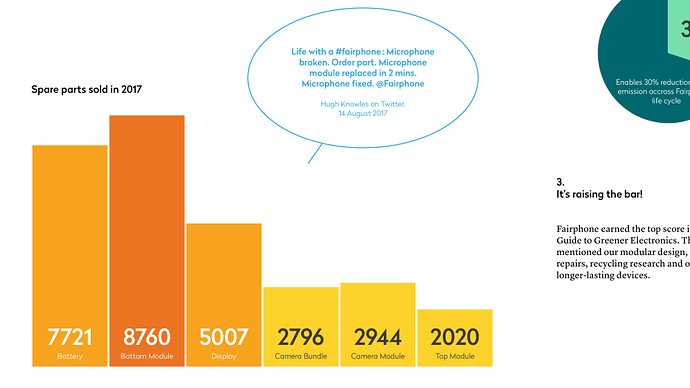 I must say that I’ve seen many USB ports of the Fairphone 1 fail and this means that the whole motherboard has to be replaced as resoldering is not reliable. A replaceable bottom module seems to be the better strategy in this regard. Keep in mind that the USB port receives the most stress in a phone because you attach the charging cable every day. (A magnetic cable helps in this regard: 🇬🇧 🇩🇪 Magnetic USB cable recommended to avoid socket probs)

I see your point Paula, works from a re-cycling point of view, I guess I was just so fed up that the phone is unreliable.

I think a phone with similar performance is only around 110 euro, so would be cheaper, but maybe not so durable.

Just adding to this thread to confirm that I bought a magnetic charger and it definitely worked! 9+ months on, my bottom module microphone is still going strong. Would recommend as a cheap preventative for everyone.

Hi Paula, Sadly no, as they supplied the second bottom module under the guarantee they would not replace it when it went wrong as it was over the two years since I bought the phone.

Any chance of repairing one of them? Some folks like @ecosepo and @ElKrasso were successful in doing it but I would say my case is different.
I may get a spare module of a friend of mine before I may buy a New Fairphone Bottom module with USB-C port

According to FP’s new Impact Report (PDF) , the bottom module is the part that failed most often in 2017.