I would like to try a gcam port again

But I am a little paranoid. I guess I can have more safety, if I install gcam in a sandbox.
Has someone experience with serious sandbox apps? In specially open source? I read that a sandbox can damage some phones. So I’m looking Forward to learn of your experience.

I would like to try a gcam port again

But I am a little paranoid.

Hi What are you worried about?

I have the default camera app, Open Camera, and Gcam Nikta on my FP3 and never had or even thought there may be a problem.

Never say never, because in the first time its to late. 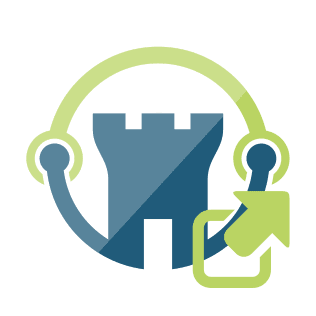 none of the gcam ports have ever tried to connect to internet, no calling-home issue.
neither nikita nor bsg nor wichaya

the only thing they are doing is to use the microG location service “location.services.mozilla.com”, because i’ve configured them to set the location tag.

i use the ports as my main camera and every day…

I thank you really for joining the discussion, but could we please stay on topic? I would take some other apps in the Sandbox, too.

but could we please stay on topic?

what should be offtopic here?

Has someone experience with serious sandbox apps?

never had any problems or issues.

but not sure if i can trust them more then the gcam port for itself.
it is a phylosophical question of trust

I read on heise.de that shelter is able to crash/destroy a phone. thats the reason why I am asking for your experiences with FP4. Do you have experiences?

but could we please stay on topic?

what should be offtopic here?

Your original post did specify gcam, so Fairphonehulks comments seem more than a little appropriate

Are there other specific apps other than gcam you are concerned about?

thats the reason why I am asking for your experiences with FP4. Do you have experiences?

never had any problems or issues.

If you use the Forums search function you will find Shelter mentioned multiple times especially reg WA. Also in other groups people mentioned to use it at least on FP2 and FP3. I don’t use it, just tried it once, and phone with custom ROM was not bricked.

Still what do you fear will the GCam Port do? I think Shelter will not filter potential virus coming with the apk file and when its not spying I’m not sure what the benefit of using a sandbox for this app will be…

I really dont wanted another discussion about gcam, it was just my usecase with the sandbox. But ofcourse its an open discussion and I want to answer your questions, what my Problem with gcam is.

Still what do you fear will the GCam Port do?

I wonder that everyone is talking about gcam, without naming (or knowing) the risks.

One example for a risk is described here:
“It’s important to understand that these files don’t come directly from Google. Modifications are done by people that could, if they wanted to, add malicious code. There are risks when installing apps from the internet. Download and install only if you understand the risks.” Safety Warning About the Google Camera Port

And ofcourse its allways an individual question of trust. I’m not an Developer so I trust professionals in blogs and magazines. I also have trust in open source. Shelter is open source, gcam isn’t!
And I didnt found a serious source where gcam is named without a warning.

Shelter is open source, gcam isn’t!
And I didnt found a serious source where gcam is named without a warning.

It seems someone / people decompile and rebuild and technically the code is open.

What is Smali Code Android

I see in your profile, that you dont use the stock rom. have you made good experiences with shelter on stock rom too?

and I noticed that the version in playstore is not up to date (2020) in relation to the f-droid version (11-2021). also some users say that they got virus warnings. what do you think, do you have the same experience?
for example

thank you. but then is the question still open for me, because iode is another rom.

Yes, another one have to help you if you have not the bollocks to to try it for your own
I’m out now

" [This is a Civilized Place for Public Discussion]
Please treat this discussion forum with the same respect you would a public park. We, too, are a shared community resource — a place to share skills, knowledge and interests through ongoing conversation." (FAQ - Fairphone Community Forum)

So, no, I dont want to risk, that I crash my phone. But I hope there are friendly people outside which already tried shelter on stock rom and can tell the community about their experience or warn. 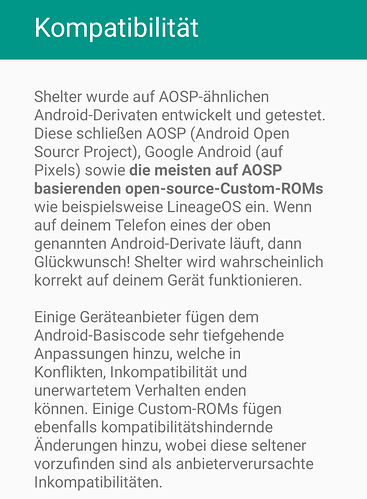 But I hope there are friendly people outside which already tried shelter on stock rom and can tell the community about their experience or warn.

Yes, I did it on stock before I used iode
Both, island and shelter
Worked both without problems