Hi all, my FP2 is working smoothly except for one thing. Everytime after returning from screen switched off, Volumen for ringtones and notifications is zero. Strange enough, I can’t change it neither via Touchscreen nor via Volumen buttons. The only thing that helps is reboot.
Edit: Problem seems to have gone by now, thread can be closed. seems like the phone has grown up

I have no idea what might be causing this, though. It happens when I turn the phone silent and when I want to unmute it, I have to reboot in order to play music or audio files. Notification sounds still work properly…

I wonder if this is somehow connected with this issue: Ring volume switched off for a long time when making a screenshot

It’s actually quite the opposite but could still be related 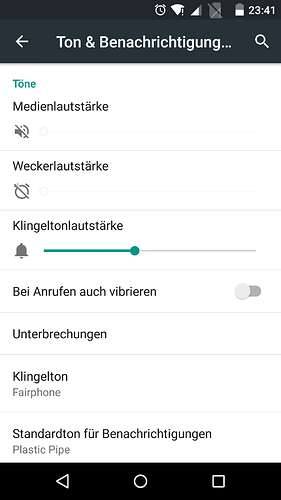 Since this morning I have had the same problem too. I can’t control the media or alarm volume (both greyed out). On top of that I can’t change the volume during a phone call. It stays so low that it’s almost impossible to hear the person on the other side.

I didn’t take off my back cover, so it can’t really be related to that. Once I rebooted and charged the phone again it worked fine for half an hour and now I am back to greyed out volume bars and asking callers to scream. I’m not too keen on returning to factory settings just yet since I just set up the phone.

I have the same problem since today!
I can’t change ringtone volume anymore…it’s gone totally silent and the button to change volume has turned grey. Has anyone come up with a solution yet?

As I said above, the problem vanished after some time and has not reappeared since. So unfortunately I don’t have a real solution.

For me it disappeared and then reappeared a few days later… Now a week has gone by without ringtone sound.