Primary Microphone not working and tired of replacing the bottom module

A few months, after I got my FP2, the microphone stopped working. Later, the same happened with the replacement part. And now again with the second replacement part. I don’t want to elaborate on the trouble shooting now. There are two tickets for anyone curious:
https://support.fairphone.com/hc/en-us/requests/157320
and
https://support.fairphone.com/hc/en-us/requests/216279

Now, I could keep ordering one or two new bottom modules every year or so. 25€ aren’t that much over such a period and I could order a bigger bulk to save shipping fees. But that would kinda miss the basic idea around the FP2: It would miss the point of being environmental friendly and made to last. Also, the delivery company DHL express is just shitty.

I want to try another direction: Repair the bottom module directly. I have a professional background regarding electronic circuits and experience with soldering. So there isn’t a big problem here. Everything I need is a broader understanding of this specific hardware: Which pin does what? How does the circuit inside the module look like?

I already had it opened and tried a few general things: Clean the contact pins, paint conductive lacquer onto the kinda scraped looking contact plates of the display module, cover the pins in solder tin (and clean the flux away). So far, no effect.
It made sense because at first, the mic would still work if I pressed the whole phone at the bottom centre. It just felt like a contact problem.

But after a while (before my attempt of deeper repairs) this stopped working, as well.
I’ve got a few more ideas, though:

My biggest problem here is that these tiny details are hard to recognize. Using a microscope with ~50x magnification helps. But I still need to know what I am looking at. Some of the parts, I can recognize as diodes, resistors and capacitors. The microphone is under a rubbery casing. there are also some black conductor paths recognisable on a black background.

It would be extremely helpful to have some kind of circuit plan at hand to analyse further. I would also like to test the module separately, for which I need to know which pin is connected to what.

Does any of you folks here have such kind of information?
Or any alternative ideas?

I’m with you. I think it doesn’t make sense to order new ones because I think it’s not the module which is broken but the connection or something on the mainboard.
I friend hat it’s bottom module replaced because of charging issues and I tried it as a replacement for my mic issues. But it didn’t help.
I want to send my bottom module to inspection to see whether I’m correct. In the meantime I can use my phone without my bottom module (charging is now broken too and mic is not working anyways. the vibration notification im rerouting to my miband fitness tracker and the sound output to the headspeaker) Maybe I can build in a new USB port myself for future charging possibilities.

I am pretty sure, that it is the module because replacing it helped for a few months. There are forum entried where users are warned to handle the phone while it’s charging because the wiggling plug causes too much deformations on the connector. I think, this shouldn’t matter but we are talking about the second generation of a completely new mobile phone concept. So it’s a plausible thought.

Your friend’s bottom module might have had more issues than just charging or it’s really a connection issue with yours. Did you check the connector pads on the backside of the display? They aren’t solid metal. I noticed that the conductive surface scratches away easily, so I put conducting lacquer with silver on them.

As for the next steps, I want to understand and repair whatever may be broken here. Could be a conductor path or a solder joint.
After that, I want to solve the issue for good. Dreaming of an induction charger. ^^

I repaired two bottom modules some time ago where charging problems were the issue. There were some broken solder joints I could easily resolder. Charging works well now, but there are also the mics not functioning. I did some research but there is a massive offer of MEMS with slightly different specifications.
To be honest, it is too much time expense for me to order some of each and try it out wich works best.
I would prefer FP would provide wich specification they used. The desoldering and resoldering is a piece of cake compared with the research efford.
@Stefan As I am not able to take part on the EFCT18, could you kindly ask for that. In view of sustainability they should be interested in a community that is able to repair instead of just swap modules. What do you think?

I’m adding @Monica.Ciovica. Maybe she can find something out in the meantime. I won’t have the head to think about the microphone specification, unfortunately.

Annoying. Third time to replace the bottom module in 2.5 years. While the first two where on warranty, this is exactly NOT why I bought a FP2.
I could live with a faulty module IF they would at least communicate: hey, we have shitty bottom modules but the good news is: the rest of the phone works a treat!
I tried contact spray, checked for soldering problems and fiddled with the case as the contact place appears slightly bend - no good.
I have been thinking of buying a used FP2 to experiment with other OS and replace my old Galaxy S4 but I am not sure if ALL bottom modules brake after 8-10 month or if its just my lucky star…

Well I guess it is pretty clear that Fairphone has problems with delivering parts of the desired quality consistently. Sadly, luck seems to be a factor.

For what it’s worth … mine works fine since February 2017.
… And I use magnetic micro USB adapters to relieve the USB port of stress.

I also use my first bottom module. Got my FP2 in week one 2016.
You should try playing the lottery

By the way: I can not recommend using any kind of contact spray or alcohol based cleaner on the inside of the Fairphone!
The reason is simple: the small gold spring contacts are very sensitive. I use some kind of these contacts in the company I work for. You can clean them with A LITTLE pure alcohol dispensed on a cloth and wipe them.
If you flood them with a liquid, I made my experiences with contact problems. So it could come to malfunctions which are very hard to find.

I’ve repaired a non-working bottom module. The microphone didn’t work at all. But I could make it work by pressing firmly the bottom right.

I’ve opened the module (using a torx #5 for the 2 screws). The golden contact plate was slightly curved. I slided a cardboard underneath (as shown on the picture). I also put a piece of cardboard between the screen and the bottom module in line with the contacts.

The microphone is working again. I guess that the contact pins distort the plate after a while. 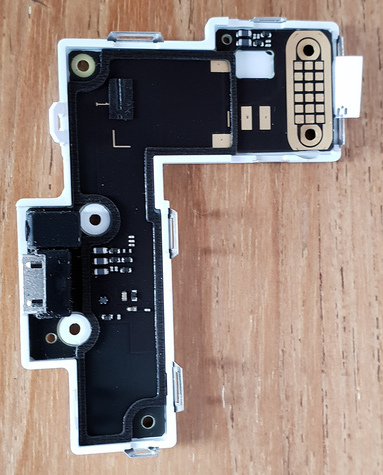 Have to thank you as well. £10 for a set of T/star drivers and I’m back on line - for how long remains to be seen!

Hi @ecosepo, I wanted to do the second part of what you said,

I also put a piece of cardboard between the screen and the bottom module in line with the contacts.

can you explain more? I was putting a piece of paper there, but i was worried that the contacts between the speaker unit and the display don’t touch, and that this would cause a problem. i tried doing that in two spots -one just where you showed in your picture, on the right, and i also tried putting the paper above the usb port, but there was still no microphone function during a call. There was sound when i squeezed the phone just above the square-shaped overview button.

@skimo12 I put a square of cardboard beside the camera button to have more pressure on the bottom module. But after a while, the issue occurred again. I gave up and ordered a new module

It’s nice to be able to replace modules. But the modules themselves haven’t been designed to be repaired unfortunately.

I don’t have much to add except for saying I applaud your efforts, and

Dreaming of an induction charger. ^^

Someone made a Qi mod for the FP2: Prototyping Shield with charging port (e.g. QI)

Hi @ecosepo, thanks for the answer. I was trying to fix the phone of my friend, but now I understand that he needs to order a new bottom module.

Putting cardboard in helped for about a week. Now having to go through the process of replacing under warrantee - will be replacing screen at the same time. Last chance though as phone has become virtually unusable as well as poor reception so too many problems.

Consider observing (and cleaning if necessary) the contacts on the back of the display module. This fixed the problem for me so far (ok just hours but it’s a relief)

The grey pad on the back of the display where the microphone module makes contact (there are three such areas) should be shiny. Mine were dull, and somehow oxidized. I scratched them shiny again using the tip of a screwdriver, and now when I test (using Skype test call, for example), the recording no longer sounds muffled!

I also tried bending up the pins on the microphone module so they would push harder. Not sure if that also helped.