Potential for a solar panel under the transparent back cover?

I’ve been thinking about how to make a solar charger back for the Fairphone 2. Would it be possible to have a solar panel that sat between the electronics and the transparent back cover? I guess the major question is is there room between the electronics and the back cover to do this? These are the major advantages and issues I can see with this idea:

Although the phone is big … it’s too small for solar panel charging (=it will take a long, long time). Just look up the information and do some math. Four times the area will do, I think. So far, FP has not really released enough info to really calculate this, but you can use rough guesses or data from other phones.

The main problem is the efficiency, a standard “strong illumination” is rated at 1Kw/m² , but the overall efficiency of a solar panel+ circuit will never exceed 10% in best case scenario ( like, super sun and very low temp, which is highly unprobable ^^)
So, we have 100W/m² (thats also considering that you are orienting your phone at the right angle

For the fun, we can go further in little calculus

over a day, you have the equivalent of 7 hours of plain sunlight, but over a year, you have a ratio of 0.6, so :
0.837*0.6 = 3.486 Wh /days in average over the year, so you will need, on average, a bit less than 3 full days of charge for your phone, who doesn’t hold charge for more than 1.5 days according to current reviews
Also, you want to slide it under the cover, which will block a part of solar ray, keep in mind that a perfect glass already catch about 10% of the light, so a translucent plastic will probably catch something like 40%

A last thing , exposing your phone to direct sunlight for prolonged period of time is not recommended at all ! (too hot !)

If we get more info we could do better math. What is a good time charging time/charge amount someone will need?

Maybe we could brake it down in watts? Most of the time a bigger solar panel with a “power bank”=2nd charged lipo … will be more helpful. I would recommend using something like that.

Most small panel setups I found provide 4.4W (and claim to charge most smartphones in 4 hrs with full sun I assume …) and bring 4,000mAh with them with a 2nd battery.

Well if you really want to implement something like that, then not under the transparent cover but using a replacement cover which is built from these solar panels.

Another point not mentioned here is the impact of the battery health. If you consider a situation, where sun is once there and then it’s away, you will get tons of charge/discharge cycles which could considerable shorten the lifetime of the battery. Imho, using a solar panel for such a power-efficient device like a smartphone is trying to optimize things on the wrong end. There are so much better opportunities to save power than poweringing a smartphone with solar panels.

To implement the emergency scenario, I would rather suggest to configure the phone in such a way that under 5% of battery it will do a shutdown, so if you really have an emergency you will have enough juice to start it once to do your emergency call / gps fix / whatever.

Another point not mentioned here is the impact of the battery health. If you consider a situation, where sun is once there and then it’s away, you will get tons of charge/discharge cycles which could considerable shorten the lifetime of the battery.

Charging your phone when it loses 10% of its charge would be the best-case scenario, according to Battery University. Obviously, that’s not practical for most people, so just plug in your smartphone whenever you can. It’s fine to plug and unplug it multiple times a day.

So, in conclusion, the discontinuous charges of a solar panel would not do the battery any harm.

maybe check this out:
it is a solar battery charger with 3rd generation flexible solar cells. Not cheap, no doubt, and another story where you have to wait for your product. But it is really awesome, I think. Another fair use story, maybe.
crowdfunding page link 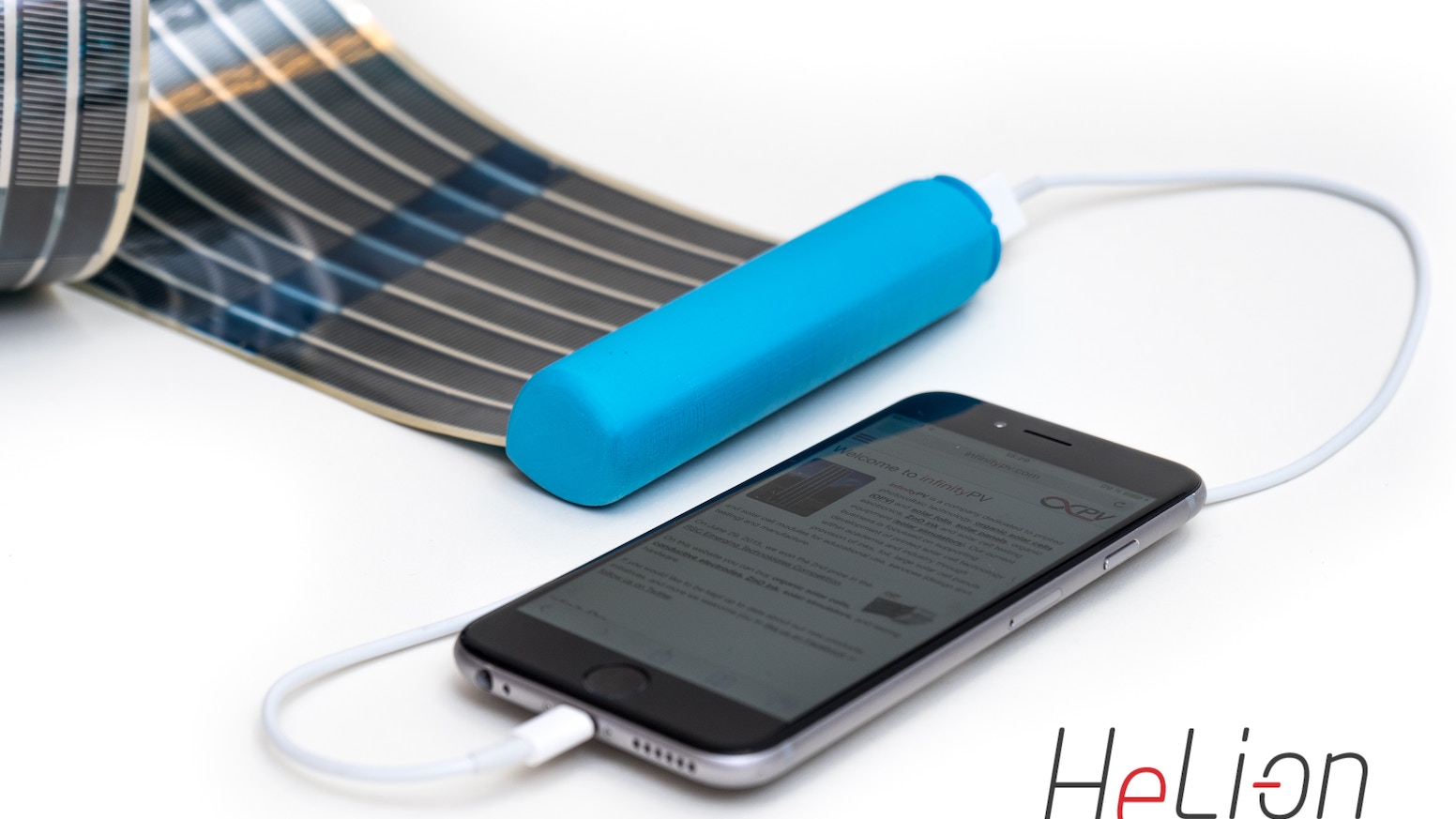 The infinityPV HeLi-on charger allows you to carry a solar panel and battery in your pocket.

I don’t fully agree. Most Li-Ion batteries have the lowest wear when you try to keep the charge between 30 to 70%. There are a couple of people (e.g. in the Thinkpad forums) who did that and got only around 5% wear after several years and over 1500 cycles. That’s also the strategy which car makers try to adopt for electric cars, so they design the charge electronics in such a way that you can neither fully charge the battery nor fully discharge it.

With that being said: I still doubt that constant “charge/discharge” - like the one discussed here which purely depends on the sun (like let’s say 80 times a day) - will be really healthy for the battery. Especially in the (rather unlikely case) that it will allow you to keep the battery almost full when you are in sunny conditions and no proper charging strategy has been implemented.

But the biggest concern I have with this is really the point which @ben mentioned. To use the sun energy, you need to put your phone in a hot place. And I hope that we all agree that heat (especially when charging) kills batteries much faster.

Everybody, please have in mind that energy is measured in watt hours, not in ampere hours (amount of electrical charge) or watts (power)

At http://nl.waka-waka.com/ you can find solar light, solar power and a combination pack.
I would prefer a separate powerunit above a Fairphone with a solar back.

Dirk (creator of the jolla keyboard) created a similar sort of thing for the Jolla Phone, and with the phone on flight mode or otherwise using as little amount of power as possible he managed to charge about 3% in an hour.

Please forget about putting a solar panel on the phone. The huge list of cons far outway the total absence of any pro’s.

Just get separate giant solarpanel with a battery in it and usb out.

Do you know WakaWaka?

Keep in mind producing solar panels is probably still very energy and resource intensive.
It is only useful if you put them into good use (i.e. into the sun and producing energy!

Assumption below, i have no data to prove that!
Unless you are really a researches or wildlife photographer or out in the wild for other reasons and really, and i mean really!, using such a charging device, chances are you are never producing the amount of energy production, mining, transportation of such devices to your door cost.

I agree with you (only buy it if you really, really need it … the smaller the panel, the lesser the use time = worse). But do you have recent information to back this up? I know this was true a long time ago (that building solar panels often needed more energy than they would ever “harvest” in their lifetime) but is this still true? I’ve never found new information regarding this and in the meantime a lot of new solar panel manufacturing techniques (with new materials) were invented in the meantime. Does anyone here know? I assume this will be still true for the “smaller” panels, but I was not able to find the information.

I slightly edited my post since i have no data to prove my hypothesis.

Thanks a bundle. I have already pledged for one of these, they look great.

I love the concept. Finally a nice every day use for the bio solar panels (for which, btw @ben’s argument is obsolete). It’s a little bit expensive, but I hope that it causes enough impact to draw follow up products.

As far as I remember they are not as efficient as silicon based cells (which is one of the reasons they are not used for big solar collectors), but since the material is so cheap and easy to work with its perfect for applications with don’t need much energy.

I really like the idea, if the battery isn’t harmed by it.
I would be happy if it just prolonged my average time of use.