I accidentally clicked the first option

Happened to me too, so I had to setup the poll a second time. I now put the question into a headline.

@Irina_Spitznagel: I never use the FM radio because I listen to music in the train, where the reception is bad due to multiple tunnels.

I plan to use the Sennheiser CX400 in-ear phones I now use for my SansaClip mp3-player. It has a short cable that I connected to the SansaClip that I keep clipped (hence the name) to my collar, but since the Fairphone is too heavy to clip on my collar, I ordered a lengthening cable. I searched for ear-phones with built in microphone, but they were much more expensive and I don’t like buying something new when I got an old thing that does the job. When I make a phone-call, I will take the phone to my ear, for music I will use my old Sennheisers.

I didn’t vote (yet) because I have a pair of Bose IE2 in-ear headphones with cable which I’m very happy with. But I couldn’t resist to order the Dash which I’ll get soon. Then I have to decide whether in-ear bluetooth with control is better.

The best you can have is bluetooth headphones with jack plug, the two worlds in one

Or, if your main concern is about cable durability, there is tons of on hears headphones with a detachable cord (w/o bluetooth function i mean ^^)

I have a nice compromise - I use a rechargeable bluetooth dongle that has a headphone jack. This way, all of my headphones can be bluetooth!

I am really happy with my over the ear Sony MDR headset.
This one also has a mini-jack connection, so also if battery dies I can still use it with a cable.

There are probably more headphones out there that support both.

edit:
Just stumbled across Pelican Headphones. Repairable headphones you rent for €5,- a month. It’s a Dutch startup and their crowdfunding campaign ends today.

Having said this, the in-ear design may take some getting used to (I think they’re very comfortable ) so I recommend testing before bying.

I’d like to draw your attention to Pelican House headphones (it’s not one of those options in the poll), see http://www.oneplanetcrowd.com/nl/project/126081/. They’re a crowdfunding project (closes today (!) November 30) that let you ‘rent’ a headphone service. It’s designed to be good audio quality, and most importantly: modular, so if a part breaks you get a replacement for free and you don’t have to throw the whole thing away. This philosophy aligns very well with the fair phone’s.

I chose neither of the answers. I have around ear headphones with a cable because:

OK, I always thougth that over-ear are to big for me, but I will consider it. Do they get enough power from a smart phone?

I should’ve probably thought about the options of the poll more.

@Douwe @tomasklos thanks, sounds great, I will look into them! Edit: I couldn’t find an English description. I don’t really feel comfortable supporting them, if I don’t understand their mission / their offer.* Do you find them trustworthy?

*I only found this in English: http://www.climate-kic.org/start-ups/to-do/

The “power” in those headphones is the so-called “Impedanz”:

I have those with 80 Ohms. They are loud enough for everyday use (smartphone) and I usually don’t play them at maximum level. Sometimes when I had a bad day or the music piece is not loud enough I need to turn up the equalizer on the music playing application.
My laptop delivers more than enough current.
Go to a store and test it out!

you can also buy on ear or over air headphones with a replaceble cable.

thereare some from sennheiser, koss, akg and teufel.

@StefaBrand for now we only focus on the Netherlands. We hope to deliver to Germany as soon as possible due to logistic challenges
1 Like
humorkritik December 4, 2015, 8:16am #21

Hey, @Stefan, since you saved my day (well, multiple days) together with @tobika, I think I owe you. So, here’s my two cents on headphones:

I chose none of the options above,since I am still in the process of decision. This sometimes takes longer when there is no good alternative. I tried many headsets. They are all not what I am looking for. Thus, I keep using some rather cheap cabled headphones sitting in the drawers, which one by one die after some time. Hell, I even killed my old Game Boy headphones, which I thought to be indestructable! (Washing machine accident. Shit.)

My current favourite is a Sennheiser Momentum on-ear (with cable). Which does, however, not work with my Fairphone. The connector does not fit with the original FP case, which I until now refused to cut open, since the USB connector opening and the headphone opening are too close together to do this without further damage. BTW, I am still annoyed by this design flaw, and blame it on A’Hong. Also, and even more important, the cable remote does not work with VLC. I tried that in an electronics shop, and was really surprised. I suggest you try it yourself, and see if this is just a problem in my FP1, or a general problem.

That said, if I had to choose an in-ear model, I would order a Shure SE215-K plus remote control cable (Important! Otherwise, again, the jack would not fit with the FP1 original cover. I tried with the standard connector!). The person who recommended them worked at the Fraunhofer Institute for Digital Media Technology and did audio testing on their equipment. (Which is one of the top spots in Europe to do that. I am still sad I didn’t have the chance to try out their test setup myself. Damn!

) The recommender convinced me that the audio quality of the SE215-K is really good; nearly analytic exept for a slighly too strong bass. Great for electro, even more so for my Beatles-flacs. Šostakovič, J.S. Bach, Bartok and colleagues suffer a little. But for me, it’s really OK.

The price is good for the build quality, and the friend who let me try shared his little secret and told me that if you order them from Canada, you can save a lot of money. BTW, the cable goes up and behind your ear. This feels really akward at first, but I got used to it.

The only reason why I refrained from buying them is that they are isolating against ambient noise all too well. This is great if you are commuting by train, @Stefan. However, I used to commute by bike, and would like to do so again. I will thus need an option which is a bit more flexible. With on-ears, I could also put them on slightly “wrong” to get some ambient sound in, and don’t get hit by a car, or other bikers.

All that said, I originally wanted to have a bluetooth headset again. I used to have a Motorola S805 bluetooth on-ear headset, which was quite good. The battery died shortly after I got my FP1 in Jan.2014, and I tried for more than half a year to repair it. I ordered spare parts from several sources. Repairability is not as bad as expected - however, the bloody thing does not turn on any more. I have no idea why, the batteries I tried had the right specs. If anyone want’s to give it a shot, I would give it away. It apparently used quite good drivers; the sound when cabled was really good. Of course, BT resulted in a loss of quality, but I am not a real audiophile. (A real audiophile would never use BT, but then, they also use bamboo condensors and suchalike. ROTFL.)

All new BT headphones I looked at were either to expensive, to shabby, or even both. Also, the FP1 (and, as far as I see, probably also the FP2) do not support APT-X. Which is a real shame, since in my experience this really improved the audio experience. Even for me, and I am really no audiophile. Some of my friends are.

I can recommend the SE-215K. I am tempted by the Sennheiser. But I still haven’t found a pair which would fit my needs, and is more or less affordable.

Wouldn’t use Bluetooth or wireless earphones for the reasons discussed here realting to the health impacts of radiation from our phones Is radiation stronger, when a phone looks for a connection?

I looked into the topic again and found this Gizmodo article. They recommend the Westone Adventure Series Alpha (200$) and the Shure SE215 with M+ cable ($100). Both of them feature replacable cords, but the latter miss “the super-low bassy frequencies (20 Hz to 22 Hz)”. Would this be a problem?

I think, if nothing speaks against it, I will buy the shure se215.

but the latter miss “the super-low bassy frequencies (20 Hz to 22 Hz)”. Would this be a problem?

If the range in question really is 20Hz to 22Hz, I would say it’s rather nonrelevant for a big majority of users. It’s at the lower limit of what’s sensible for humans, which is about 20Hz - 20kHz. Even the most common highly priced desktop loudspeakers or even subwoofers usually have ranges beginning at >=25Hz (with a decent sound level). (Ok, you can’t really compare big loudspeakers to headphones, but I did just to give you an impression.) The lowest tone on usual 4-stringed double basses or (electric) bass guitars is ~41Hz, on 5-stringed basses it’s ~31Hz and on usual pianos it’s 27,5Hz, though there are big concert pianos going down to ~16Hz, as can be see from this scale table.

I don’t know the range of techno / electrical music …

Anyway, I hope that helps to make a decision concerning this point. 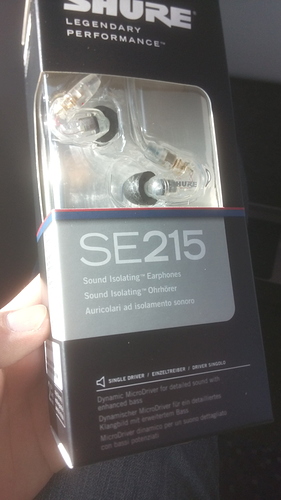 Too bad they are not produced in a fair way… But they should last for almost ever!

Unfortunately my Fairphone’s earphone plug seems to be a bit worn out after more than 2 years. The plug doesn’t fit strongly, so it unplugs easily.

The Sony SBH20 does the job nicely. That’s what I use. You can replace the supplied in-earphones with your wired headphones and keep the bluetooth connectivity…