Poll: If you could install any mobile Operating system... Pt. 2

…which one would you choose to install on your Fairphone?

Since then the community started working on porting the top 4 of these. You can see all working (and not yet working) OSes for Fairphones here.
I guess that poll was actually a great tool to get people interested in porting OSes for the FP2. Especially in the Sailfish community the poll was shared many times and lots of Sailfish fans logged into the Fairphone Forum just so they could vote.

I’m hoping the following poll can have a similar effect.

This time I’m not including all mobile Operating Systems. I’m excluding ones that are proprietary (and therefore will never run on a Fairphone), ones that already run on the FP2 (or are very close to do so) and ones that are discontinued.
In the second post I’ll write a list of excluded OSes and the reasons and I’ll gather suggestions for OSes to be included in the next poll.

Show results
2 Likes
:fr: MARU OS sur le Fairphone?
Poll: If you could install any mobile operating system
:bar_chart: Poll: What OS(es) do you want to run on your next Fairphone (FP3 or later)
paulakreuzer May 1, 2017, 5:09pm #2

This post is a #wiki, so please add OSes you’d like to see in the next poll here:
This is no longer a wiki post. The new wiki to gather future inclusions can be found here.

OpenOS (lucky me, I already have it

I would be interested to see Maru OS working on my Fairphone, unfortunately not available in the poll

I would be interested to see Maru OS working on my Fairphone, unfortunately not available in the poll

You’re in luck, nobody voted so far so I was still able to sneak it in.

Also voted for MaruOS. But also because I do not know most of the others!
Where did you find this list @paulakreuzer?! I mean… Dirty Unicorns, is that a real OS? Lol!

If it would run on a mobile phone, I’d vote for TempleOS btw…

MaruOS was the one that immediately came to my mind when I read the poll’s description. Would be great to see that on a Fairphone!

Plasma Mobile came into my mind even tow i don’t know much about it.

Plasma Mobile came into my mind even tow i don’t know much about it.

I came across it during my “research” for the poll but decided not to include it since according to Wikipedia it only has a preview version available and that is from 2015. Also the Website doesn’t state anything specific, except it only works on one device so far.
It’s been added to the list for future inclusions though. Let’s see if development comes along until the next poll.

I am new to the forum, I am considering to buy a Fairphone 2!! Probably buy it soon!

I have just voted for MaruOS, since it is a cool idea. I would love to see Plasma Mobile on my future fairphone, though. However, I understand your point that it is still in alpha version,…hope it gets developed soon!

However, I would be happy with anything that is opensource, respect my privacy and works properly!!

See you around the forums!!

However, I would be happy with anything that is opensource, respect my privacy and works properly!!

Thank you @paulakreuzer ! I will probably take a look at Fairphone open and Sailfish OS, since ubuntu for phones seems to have been discontinued by Canonical.

Regarding Plasma Mobile, I would like to say that they have more development from 2015, but the website is a bit messy. They have newer things at http://neon.plasma-mobile.org/ , although the support seems still centered in Nexus 5… but maybe somebody is able to port it to fairphone.

ubuntu for phones seems to have been discontinued by Canonical.

The community is continuing the development and FP2 is actually one of the reference devices:

Our focus right now is on our three stable devices: The FairPhone 2, Oneplus One, and Nexus 5. We’re putting our efforts toward bringing these devices back to a fully working state. After that’s finished (which it is, mostly), we will push an image to the Stable channel. Gone will be the days where development channels are more functional and less buggy than stable! Prepare thy phone!

I already tried but the near future will be getting Halium working and then Plasma Mobile should be able to run on top of that without problems.

And where is LineageOS in the poll?

OSes already on the #oslist were excluded in the poll.

pretty awesome!! I did not know about that! Thank you for the information, it is good to know!

I already tried but the near future will be getting Halium working and then Plasma Mobile should be able to run on top of that without problems.

As you can see in this tweet, Halium can boot both OS’s on the Nexus 5. The third image, though, is the most interesting. It shows Plasma Mobile booting on the Fairphone 2, a phone that the OS hasn’t been explicitly ported to. It’s easy to see the opportunities that Halium opens up and we’re proud to be a part of the project. 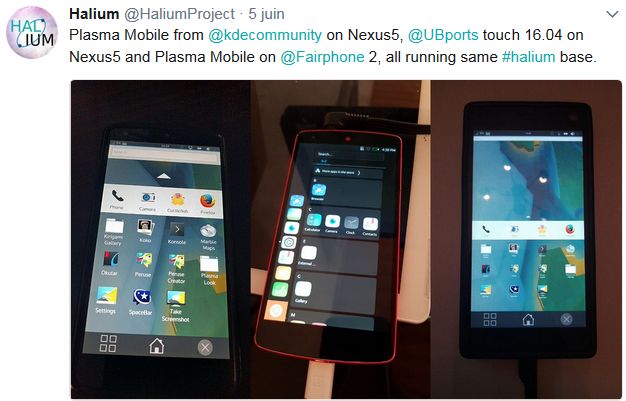