Poll + general discussion: who got Android 10 Update on their FP3 & first impressions

Your forum user profile says your Fairphone is a Fairphone 2. Is that still the case?

If you do have a Fairphone 3, let us know what version number of Fairphone OS is currently installed. It should be a term like “A.0134” or a lower number.

Thanks for your reply!

I do indeed have a FP3, I did not remember it was in my forum profile. Will update that in a sec.

Not sure where to find which version, but in the buildnumber of the OS it does say “A.0124”.

You are probably a Vodafone customer then, right? That’s a known factor that can delay FP3 updates. If you have access to another network’s SIM, you can temporarily replace your Vodafone SIM by that one and might get the update quicker.

You are correct Sir, I do indeed have Vodafone.
I did see that this was mentioned before. Thanks for the suggestions about another SIM!

Not really a problem: After the installation of Android 10, the calendar widget on the main screen appears twice.

As more and more bugs are added to this “Poll” thread, I opened a new one to collect all known issues. Feel free to add whatever bugs you find: Known bugs & problems with Android 10

I also use Bouygues and still no update

I wait a few days more but as I understand I may have to borrow a sim card from another provider to upgrade.
I want to have android 10 installed before ordering new modules

(this is my first message on this forum)

Hello and welcome to the forum!

You are right, borrowing a SIM card could be the way to get the update right away.
If you can wait a few more days, the update will be released by your provider as well.
As - judging from this thread - there seem to be a few possible bugs included with the update, just possibly further updates might be delayed a few days to fix some of those bugs.
So, maybe the later updates will be the better ones and it pays to be patient.

The weird thing is -> other people with Bouygues provider got the update right await. @davidfr and I did not. So it’s not linked to the provider. Maybe there’s also a progressive rollout on Fairphone’s side.

Haven’t received any update yet. FP3 on Telfort/KPN. Slightly curious about Android 10 but in no hurry. Phone works perfectly fine as it is. 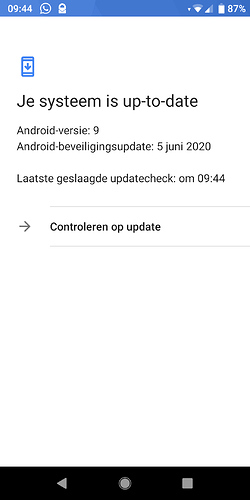 I love android 10 and finally having it on my Fairphone. It seems, though, that you have a pretty limited work force in terms of software development (Android 10 took some time, there are still some bugs), wich I don’t think you can really do too much about. I would suggest that you supply the resources for optimizing and refining the code to your community (if that is legal, Qualcomm might have a problem with that but I don’t think so), as there seem to be many open source supporters among us. It is just a suggestion and I don’t know to wich extend this is possible but I just wanted to tell you about the idea and ask if that would be possible.

I don’t like the big clock - why would I need a big clock there when I can see the time in the upper left hand corner? And thanks to the mgkoeln who suggested getting rid of the operator’s name. Maybe I don’t want to depress myself by seeing the weather constantly either. I suppose this might push me to try a different launcher or I might just learn to ignore it like the Google search bar.

May be unrelated but after I left the house I realised I’m not getting any signal for data. Data is definitely turned on

Re-entereing the APN settings fixes this for most people. Check with your mobile operator for the correct settings/instructions.

Thanks! That does indeed resolve the problem.

I’m merging a number of posts that discuss various issues that were encountered after the update into this topic. They were originally discussion on the topic below, which is now a wiki:

I thought it might be a good idea to have a breakdown of all known Android 10 issues to hopefully be fixed with future updates. Feel free to add whatever you notice. Home screen layout gets muddled once Android gestures are activated and you’ve swiped up. Google search overlaps app icons. “At A Glance” widget (date & weather) can no longer be removed from the home screen. (Not sure, if this is a bug or a new Android launcher standard, but it annoys many users.) Workaround: use a different …

@bertG, @Alex.A, @mgkoeln: I’ve merged replies to this topic, as I felt there was quite some overlap between these topics to start of with. I know this topic is starting to get gargantuan, but pulling it apart and then merging different discussions by topic is going to make things even less readable. If there’s a preference for creating a separate discussion topic linked to the wiki, just let me know.
I do still encourage starting new topics for individual issues (where appropriate) rather than just adding to the long list here, as it will also make it easier to highlight solutions / workarounds when they are found.

After the Android 10 update I no longer here anything when I pick up a call or make a call. Using a headset - wired or wireless - works. The earpiece is fine since I can listen to voice messages in differen messengers with it. I already told teh fairphone support. Carriere: O2 / Telefonica, Germany.

Same for me here. Also on O2. Did some Research yesterday. I tried with the BT in my Car and with a Bose QC2. Media Volume was good and adjustable. But as soon as i did a Phone Call the in Call Audio was so low that i could barely hear the other person.

From O2 to O2 ( my Wifes Huawei ) the audio in call volume was low. This changed with a call Partner from Telekom. At this point the Call Audio Volume was ok but also not adjustable.

I’ve not looked into it yet, but I noticed that a preview of the last photo taken is no longer shown within the camera app to the left of the shutter button following the Android 10 udpate, which then makes me less confident that the phone has actually captued the image that I wanted.