Playground: Features of this forum

Posts are always in a chronological order, but if you reply to a post - which is not the one before yours - there will be a symbol on the top right of your post. If you click it you’ll see the post you replied to.

For demonstration purposes I replied to @Stefan’s post above.

One can mention categories now, using the hashtag: e.g. #meta renders into #meta

I got these suggestions, without them I wouldn’t knew that these “hashtags” are written in such a way.

A list of category hashtags can be found here:

(It’s not complete as yet.)

how does a rating poll work?

It seems it calculates the mean of the rating values, I tried to change the vote from 1 to 4 and it increments the rating a bit between the first choice and the last one

What is your favorite Android version?

(this is a joke, don’t take content in this thread serious; we are testing forum features here)

So whatever the result is what we will get?

yes, at the moment we will start working on Android 5.2
But may of course change as new people vote

They should better provide an Android 5.27! :woot:

Is this now solved for everyone?

Bye!
EDIT: the poll disappeared just after I answered!

I still see the poll… 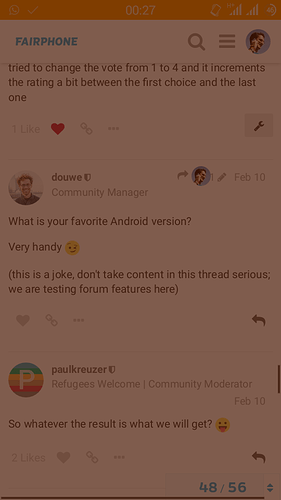 Huh? Now i had the same: I saw it and then it was gone…

I think this started with the introduction of the new plugin. I also had a lot of “Script does not respond” errors on that day…

PS.: I’m using Red Moon from F-Droid now, an open source alternative to Flux. That’s why my screenshot is so dark red.