Phone should stay on while charging

I often use my FP2 in my car for playing music. And I want the screen to stay on while the phone is in the car. Thats easy? Develpoers options and “stay on”? Yes, I have checked that and the display stays on, but dims after the normal locktime and I can see no playlist anymore - to dark. There must be an option that the screen never dims …

Have you seen this option?
Spielmops

Have you seen this option?

no, i see the option (settings>display) max 30 min before it goes dark : (

GravityBox, a plugin for Xposed Framework, has an option to manually set the level of the dimmed brightness.

GravityBox > Visualization settings > Brightness settings > Dimmed screen level (or something like that, my FP2 is in Spanish)

and a killer for it

did you inactivate the “automatically adjust brightness” option? might solve your problem to have the brightness really low all the time you want it that way…

Hi. You can do it with a macro. I did it with Macro Droid. I replaced LLama with this app.

You can configure optional Constraints to limit when the Macro can activate, by ex. on Car mode.

This feature works best on my phone and I won’t miss it.[quote=“cortomalese, post:7, topic:17305”]
Triggers to activate: Charging
Action: screen on
[/quote]
Screen is on while charging without Macro.

That would be the solution: 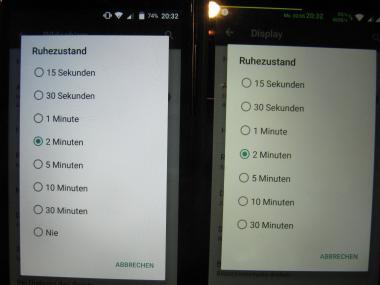 Hi. If you activate Developpers Option, the second option is “Stay on” (in French : “Rester activé”) : screen never dims during charge.

I have this option activated and the meaning is: display will not be locked. But it dims, brightness goes down very low …
Spielmops

You better try searching for a Xposed Module that adds this capability to the Android system. Wiko’s developers added it manually, it’s not an option included on Android Open Source Project (yet), the base system Fairphone OS is based on.

Where? And where is this time-number stored? And how do navigation-apps prevent device getting locked?

Where? And where is this time-number stored?

I don’t know, AOSP’s base code is huge. Maybe it’s declared on some plaintext config file you can edit manually or maybe it should be modified by changing the code and recompiling the system.

And how do navigation-apps prevent device getting locked?

An app developer can require the system to keep the screen awake with a manifest permission. Enabling this is out of your power as an app user.