Phone background changes by itself

So I’ve had my FP2 for a few days now (running on Android), and I’ve set the background to a photo that I took. I tried out a few photos before settling on one.

Today my phone background changed to a version of a photo I used before (of a tree) - only instead of green, everything was orange. It was really creepy!

I turned the phone off and on again. I changed the background to what I previously used, and it stayed that way.
Then I changed the system language to English to take some screenshots for a different issue, and once I’d done that I realised that the phone background had changed back. It’s the same creepy colour-changed picture.

Does anyone know what the heck is going on? 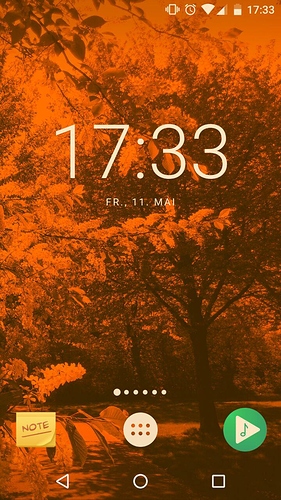 I don’t know why the picture reverts to this one, but the orange tint looks like a night filter which is either caused by an app or depending on which OS you are running (what does it say in settings > about phone?) it’s an integrated function (dimming the blue light in the evening to help you fall asleep).

Thank you for your suggestion!

I use Android 6.0.1 and don’t use its night light function.

I do use the app f.lux all day (not just during the night), which tints my screen yellowish (which you see on the buttons). I thought it might be at fault, so I paused it (when it first occurred), and the image was still weirdly coloured. So that’s not it. (And while I was browsing the menu, I did not notice any change, it’s just the picture that’s changed.)

Can you see the tinted picture in your gallery?

Do you use the stock launcher or did you install a different one which might have some filter feature or change of background picture enabled?

No, there’s only the original, green photo.

And it was the normal background-setting.

If we’re talking about this f.lux here … it can have any imaginable bug since it still is a preview version.

Is the problem gone if you uninstall it? But mind …

"Also, if you want to uninstall, do one of these things:

So maybe the app is at fault? Though I still don’t see how this would happen.

AnotherElk: sorry! I use f.lux on my computer and forgot that what I use on my phone is Twilight. Which is not in beta, I think. You’re right that f.lux for Android is still a preview.

Update: the background hasn’t been changed again, so I hope all is well now!