I bought my FP1 two years ago, and since a couple of months I notice the performance of my product is going down. It started with the system sometimes rebooting for no apparent reason, at least without pressing any buttons, but now it is constantly trying to look for updates, and generally reacts slower and slower each day. I must say I am a bit reluctant to try a complete installation from scratch (it almost feels like it’s windows 95 all over again) since it’ll take the better part of a day to reinstall everything. But I am also wondering whether it’ll make a difference. Does anyone have a similar experience, and have you been able to do something about it? (apart from buying a new phone)…

The things you can do :

But, since you had your phone for a long time, i recommend you a full wipe, you WILL recover all your performances.
One last thing, don’t forget to reboot your phone time to time ! (like once in a week or two)

Also, are you up to date concerning your phone ?

you could try to go to
Settings->Storage
and to empty the app cache.

Choose the “Cached data” and tap on it: 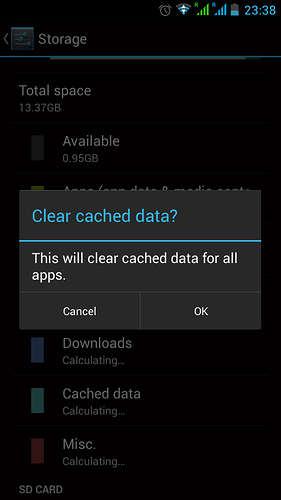 In my case it helped. At the beginning the apps were slower, because they had to rebuild the cache. But it helped and I freed some space as well.

Thank you both for your reply!

I decided to perform a complete reinstall of the operating system, erasing all data in the proces. (which I had to do twice because the first time it didnt install properly)

At first it seemed to run smooth, little problems, but after a week of testing I am not 100% enthusiastic. While there is a clear improvement, it is still not as good as when I just bought the device. It still tries to search for updates every half hour or so (i’d be happy if it did that every other week :x) somehting which I think messes up the performance. It sometimes fails to shut down apps, and while it claims they are no longer active, they are still operating (eating my RAM in the proces).

On top of that, I now have half battery time compared to what I had before reinstalling the system. Something that should be impossible, but it happened anyway.

So, before this starts to sound like a nag… if you have any other tips or tricks, I’m happy to hear about it!

You can use apps like “Autostarts” (from F-Droid) to restrict Apps from starting in the background. You can use it to get rid of the update notification and to enhance performance.

As for the battery: Try the battery reset described in the #batteryguide.

since I turned off GPS my battery lasts much longer.

The “BatterBatteryStats” app points out that my firefox browser app is quite “battery hungry”- I did not try alternative browsers e.g. like Opera but maybe changing the browser could help.