I think brew wants you to specify a directory, where to install android-platform-tools. If a program doesn’t recognize what you want from it, it will print its usage pattern, to tell you what it expects from you.

Homebrew is a tool from the Mac World. It typically knows exactly where to install programs, @Stefan s guess is wrong here.

Homebrew is an easy way to install the latest android platform tools, e.g. adb and fastboot. If you use a recent Linux desktop, like Ubuntu, you can also install those programs using the apt package manager. Or you install the full android Sdk (a bit overkill).

Remove the dollar from the command.

I managed to install ADB another way by now, but now I’m stuck with the very next step.
I give up. I don’t think it makes a lot of sense to flash a beta OS on a 500€ phone if you have never used the terminal before and need help with every single step…

If someone else however successfully flashes it (with a mac) and is willing to write down how they did it - step by step - I’ll reconsider.

Hi Paul,
I have just uploaded an updated version of the package that should contains all the necessary in order to flash the phone. I just copied the folder structure of the github of Firefox OS with the necessary scripts and files. Unfortunately, I cannot test it since I do not have a Fairphone 2 and I’m using Ubuntu GNU/linux. Can you try it on MAC OS X?

Moreover, some developers of Firefox OS are working on a Firefox plug in that should be able to install B2G on a supported device https://bugzilla.mozilla.org/show_bug.cgi?id=1166276. However, this plug in still requires to build the entire system, but it will be simpler than now tailored for end users.

This is the new shared folder where I can add future build without breaking any link https://mega.nz/#F!2UsjWBZY.
For license issue: send me a private message in order to get the decryption key.

Hi erotavlas and thanks for the info, I have a question about your build. Does it use the proprietary blobs as provided by Fairphone on http://code.fairphone.com ? If it does, are you aware of the licensing issues that forbid sharing custom ROMs built with these blobs ?

4 posts were merged into an existing topic: FP2: License for binary blobs

Can you try it on MAC OS X?

“I embraced OS X as soon as it was available and have never looked back. So a lot of In the Beginning … was the Command Line is now obsolete. I keep meaning to update it, but if I’m honest with myself, I have to say this is unlikely.” Neal Stephenson

I think in the lastest version of OS X (due to their new security system?) there is an issue with fastboot. Adb still works.

I just had a chance to play around with a mac (El captain installed, not mine) & brew. Lastest brew package out of the box lets me connect to a phone with adb (shell, devices), but fastboot is hanging with similar operations. That’s all I can say for now. Not a Mac expert.

Some sites hint modifications, but I cannot try them right now. Also brew feels much cleaner. So maybe it’s best to wait a while until someone fixes this in brew? A bug report would help I guess … if other people have issues as well using fastboot.

All I used for adb/fastboot 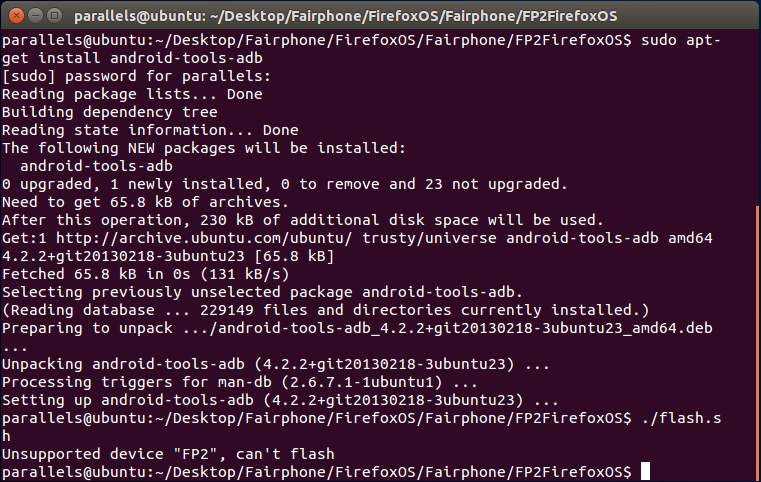