Just successfully migrated to the 1st official build that was made this morning, 20171024 (thanks @chrmhoffmann for all your work) ! 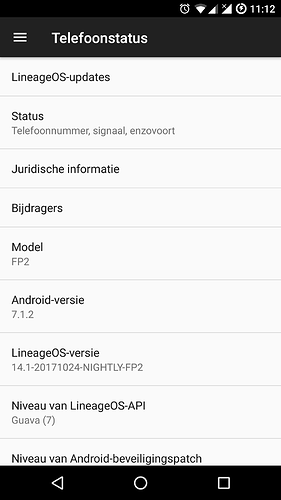 Follow these instructions when coming from other OS than Lineage!

Instructions to get on the official build from this unofficial OTA build without factory resetting:

P.s. This release does have the charging LED fixed.

Wow, this is great!!! I just yelled out of excitement!

Be aware: these are migration instructions! If you are a user running any other OS than LOS, use these instructions instead:
https://wiki.lineageos.org/devices/FP2/install

I am on the @chrmhoffmann’s OTA channel. How can I change between official nightly and stable channels?

I am on the @chrmhoffmann’s OTA channel.

I am not known with any other OTA then this one.
If you are on another I can’t help you as I don’t have the signing keys of this OTA to build you a migration zip.

Edit: We’ve worked it out in a private message.

Note: The lineage-migrate-to-prod-signed.zip.sha512 file contains a md5 sum instead of a sha512 sum.

Haha, you are totally right! Fixed!

Thanks @chrmhoffmann for all your work on this!
Also thanks to @snevas for providing all the OTA updates and now finally the migration files!

Is there also a update function included? Like OTA?
Or does the future updates only work via flashing with TWRP?

Is there also a update function included? Like OTA?

OTA updates like always. From LineageOS servers though, instead of @snevas’ server space.

Thank you. Switched the LOS without problems.

Great news! and congrats!
I moved too without google apps.
The only thing I am wondering about is that in settings the updater app says I do not have an internet connection. So I hope that is just because there is no new update. Just to mention it.
cheers
charlie

This is so cool.

10 posts were split to a new topic: Flashing LineageOS without root

I also migrated to the nightly build without problems. Thanks a lot for all your efforts you are putting into the support of LineageOS!