Hey,
I got an old fp1 from a friend and now I want to use it for basic stuff. As the security is not up to date I’ll use it only for non sensitive stuff.
Also I want to use it w/o Google. As far as I remember fp1s came wo Google by default, but this one has all Google stuff installed, even when I wipe, reset and restore it.
Does anyone here now how to get basic android wo Google on the fp1. And could this also be the 4.4alpha?

I downloaded the alpha, but when I open it, from the file manager, it tells me the file type is not supported

I downloaded the alpha, but when I open it, from the file manager, it tells me the file type is not supported

Are you sure you opened it from the file manager and not downloads?

Backup
Charge to 80%
Download the OTA package to your phone.
Open the file with FileManager (opening it from Downloads does not work)
Now you should either see the Fairphone Updater or you are prompted to select what app to open it with: Choose Fairphone Updater
Wait until the updater is done with preparations and click Restart
Wait patiently for a few minutes.
Enjoy but beware of the rough edges.

Once installed G%§$e should be gone.

Yup, file manager app.
Funny enough the file was saved in ‘my favourites’ directory, not in ‘downloads’. 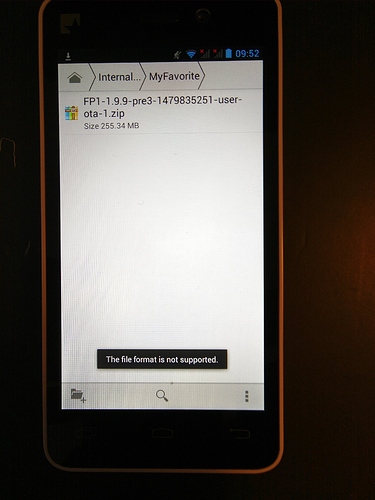 Hm, well then I have 4 guesses:

by the way, thnx for your quick and helpful tips on this early morning

ps. I now also see that the version is 1.6 Cherry. The updater tries to install a new update, but it fails. I guess this is Koala Nut…

OK. Solved.
Moved the zip to my SD card and installed from recovery following the manual on the fp support page.