Not quite, I did realize that the core chip will be soldered, but the HS-LTE in a socket replaceable for the user.

But what I meant with:

If this unexpectedly happens again with 4G HS LTE

If we in Europe won’t have the option to re-/place the HS-LTE chip into the socket due to the lack of an European version we are again stuck with (the design) slow- LTE but a freshened up new motherboard. So the bigger benefit would be for the new US customers. I think this situation would not cause amusement among the European customers, where from the FP initially came

which of course would not be your fault in general.
If destiny turns out negative for an European HS-LTE chip this situation anyway could turn out as a show stopper once this little known fact would come up in the public.
But reading through your messages it looks like you are well informed about the availability of specific chips. Probably you already know who is producing those HS-LTE chips for the US market and who could be the one for a European version.

Do you know how other manufacturers tackle this issue? Would there be an US handset version and one for the European market? I am curious about their solution.
How is your POV and how about the others here?

Hope FP will give you some support.

You seem really focused to design a VERY powerful device…too powerful ??
Where stands Atom x7-z8750 VS new Qualcomm chips ?
Why 8GB RAM ?
One huge weak point on FP2 is battery life, will your new design really bring any improvment ?
One other weak point, is 4G antenna, it drains the battery down. I m not really sure that people are interested in a faster LTE…something more reliable, low consumption would be better, no ?
128GB memory is expensive, 64 or even 32 (+SD card) is right enough

That was just some stupid inputs.
Do as you want !
Keep on !!

Hello Leo,
I would like to have a microSD slot, because I don’t want to copy all the data to a new phone. It is easy to put the card into the slot, where I have my music, pictures and so on.
And I don`t need a camera button on the side of the case. I often pushed it by accident, that is nerving. So I put off the plastic button from the bumper.
I am satisfied with the camera app.

Your rquestions weren’t stupid at all. These questions are helping me to satisfy everyone with a new fairphone motherboard.

If you do this, I will buy a Motherboard from you, and a FP2 from Fairphone. I’m in America, and I’ve wanted one for a while now. I just replaced my screen and battery in my Iphone 5 for the third time, and really don’t want to have to stay on IOS any longer!!

I have a few questions too. How hard will it be to upgrade the RAM? Will there be soldering involved? If there is soldering, could you have an option for one with the upgraded ram for more money?

Also, I’m assuming these parts will be sourced from the same crappy places normal smart phones are, correct? I’m not talking smack or anything, and totally understand that a partially fairphone is better than no fairphone, I just want to be clear about what exactly the idea is…

Also, I volunteer as an America beta tester if needbe… I know my way around terminal pretty well, and use linux reguarly, but am by no means a coder or anything…

Thanks bunches, you are doing the world a great service by helping this product come to market globally IMO. 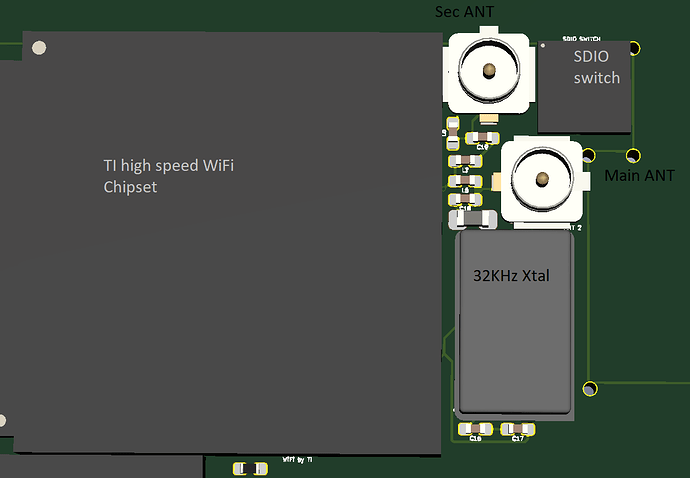 Finally finished the WiFi section of the board

While we’re here discussing open hardware design, what about a Zynq instead of the Atom? That would bring the power of FPGA (low power consumption and reprogrammable hardware) to the versatility of multi-core ARM CPU…

That way we could implement some low-level processing in the FPGA directly (e.g. electronic communication with GSM/LTE/WiFi chips and waking up CPU cores only on “interesting” events).

Of course, it’s ARM so probably Linux-only (petalinux being the obvious choice).

I think it would be a good idea to let @Leo_TheCrafter do this awesome work instead of suggesting many things that he could do differently. It seems as if he has made educated compromises.

In case this is open sourced, you can still implement things differently then.

Exactly. I didn’t want to overload him with something so different (after all, it’s the core module we’re talking about). It just sounded like the right thread to post to

I hope I could help you,

I know the CPU is a great one interface-wise, I just meant adding an FPGA to it to further extend the (potential) capabilities by doing some processing that are easier to implement in hardware than software (like formatting data).

A little bit like GPU is used to perform image processing instead of CPU: it does it more efficiently at lower Watts. We use that so the CPU can stay in Low Power Mode instead of being woken up by hardware interrupt just to ack them.

It could also harmonize the different piece of hardware so the processor sees a kind of “unified” communication (e.g. transcode all to USB/I2C/SPI/…, which greatly simplifies software code by having a single driver instead of one per component.

That said, it means a whole new design so definitely not something you should be considering now

It’s defenitly interesting but the “CPU” isn’t just a normal CPU, it’s an SoC so the important hardware interfaces have their own controlers e.g. Storage Controler or the Audio Engine

Ha you’re right, I forgot about that. It would mean more component to replace. Not such a good idea after all…

it’ interesting but it means one more IC that can’t just be disabled by a simple EN signal and therefor one IC that consumes Power even if there is no load on the device, but it remains interesting

What a seriously high attitude project! I have done MCU and power boards for industrial control, but am now into other things.

In the previous millenium, i had a PC with two IDE drives, and a switch that swapped which was C: and D: by manipulating the select wires before (re)boot. Good for dual booting / development / crashtesting… and from the booted system you could install/repair/restore/backup the other.

Maybe something like that could be possible by some miniature switch(es) and simple logic, manipulating memory enable/adresses and preferrable also physical write protect.

As switches take up space, maybe implement only a possible addon by cutting some link and solder in wires.

Having said that i have no idea about how Andriod boots… But as an example i currently would like to run the stock OS while being able to dual boot to Sailfish, and have a common store (i.e SD card)

Oh you said it - FPGA. I like those types even more since I know about this product.
That guy seems to love using them and has quite a bunch of very nice products on sale.
And the good thing is - he usually keeps a useful surprise gimmick for the customers, just something other companies would not even think of implementing.

Wouldn’t it be nice to have a unique gimmick in our FP3 (as well) which attracts some users just because of this? We had modularity, an expansion port and an open bootloader which surely caught some users just for tinkering.
How about dual boot possibilities?

while being able to dual boot

How about reality in this point Leo??

Just finished the NFC section of the board

You are running at high pace man…

NFC - and QI is both possible at once? Maybe there is a chance for an answer.

Actually now they have so called bootloaders that act as the switch: the program decides which ROM to branch to and there used to be some custom bootloaders that allowed to choose between two ROMs for dual booting different flavours of Android (or Android/Sailfish probably as well).

(but it doesn’t embed the hardware Intel SoC has…).

Yes, the great thing about FPGA is that you can emulate pretty much any piece of hardware (GPU, sound, network, …) as long as you have it connected to output devices (screen, speaker, RJ45 PHY/USB/WiFi chip).

But SoC are easier to work with, as @Leo_TheCrafter wisely said so for this first version it’s just great.

As for dual boot, it’s “just” in the bootloader so it’s not too much a specific hardware setup.