I use USB-C onboard, which uses through holes for additional durability

Very cool! I was wondering just a few days ago if it was feasible to make an USB-C bottom module… and you did it! Great work, keep us updated with the testing!

This is truly a great project!
I’d instantly take one (or maybe more) of your modules once they are in stable working condition. The timing couldn’t be better, since my current bottom module is acting up again and the primary microphone seems to either have an internal electrical issue or the module itself doesn’t properly get connection, which leads to a extremely glitched microphone that either doesn’t work or give the person on the other side an unexpected scare of sudden loud static. I have to apply pressure to a certain part at the bottom cover of the phone for the microphone to work.

I’d also volunteer to help you with any beta testing for stability feedback and such, if yo require so!

The speaker and the vibration Motor aren´t soldered to the PCB, so it is easy to reuse them. For a new bottom Module it is great to have the new standard USB port is a great thing. For me the new microphone is the best idea, cause the old one is not only the weakest part of the phone, it overdrives very fast. It is not doable to take a video of a concert for example, cause the sound is so poor.
Now my question: Is it possible to implement a microphone diversity, where in case of oversteer it switches to a secondary microphone which is less sensitive? 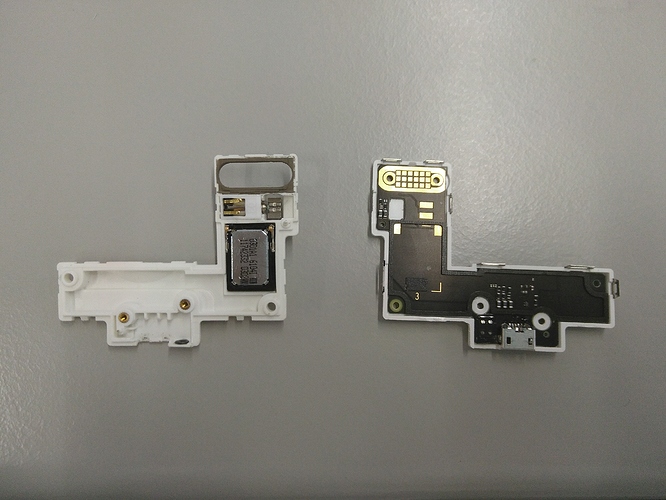 This would be hard, but not impossible. But the better solution is to use a better microphone from the beginning.
By the way: Now that you have your microphone desoldered, you can try a different mic. Just pick one that supports the 3.76x2.95mm formfactor

That would be easy if I could identify the old one and take a look into the datasheet
take a look here:

Some time went by. Last week I found some time to search for a spare SMT mic. I barely could read what is written in the mic: S1655 4617 Sadly a google search does’t gave me usable results. So a question to the community: Does anyone know, what manufacturer(s) for the microphone is/are used? I would order some parts, If I get to know it and would start to repair the bottom modules.

It is not doable to take a video of a concert for example, cause the sound is so poor.

Doesn’t video recording normally use the mic in the camera module, rather than the one in the bottom module?
Also: You’ll probably get better results with a small external mic than with anything built in.

Doesn’t video recording normally use the mic in the camera module, rather than the one in the bottom module?

I do not know which Mic it uses. I assume that the mic in top module is for noise cancelling during calls. I did not find another mic, so I think the FP only have two of them in total.
I tried to use an external mic, connected to the headphone jack, but the FP does not switch to it on video recording.

Thats correct. But what about the specific data of the used mic. Would hell to know that to change to another one with better specs.

Leo, I can provide you with dead bottom modules. Please shoot me a PM if you’re interested

I don’t need dead modules, for now. But it could become handy to know sb that has some

I have two as well. One has broken mic, on the other one data transmission over USB doesn’t properly work.

Sure, just let me know. I think I have pretty much any module here either semi functional or pretty much busted.

The thing is about any broken module, Fairphone may take them back but imo repairing should be preferred before replacing them for recycling as it leaves less waste behind. But this these days is oldschool, and who would pay for it at last…

It’s just a matter of scaling and money. Any thing can break or get damaged - needs more or less service to keep it functional, house, car, any (power)plant, tv, computer, mobile, wrist watch…
For some things one decide to get that thing repaired, for others one rather tent to go for a new unit.
Broken cars in sandy(desert) (Oil hoisting) countries may not necessarily be retrieved but simply the next one taken out of the garage for more fun rides…

I did repaired bottom modules with broken usb port (see link up in this threat), so if anybody would like to send them to me, I will repair them for free if possible. I only do not want to invest money, so the shipping costs should be covered by sender.
If someone have already have the module replaced and want to get rid of the old one I would offer them repaired for free here in the forum.

Amazing! Keep us up to date please

You could maybe give the people at Fairphone a phone call and simply ask about what specific components are used in the module. From my experience they were rather friendly on the phone. And I guess the worst answer would be no answer. But seeing how the FP is meant for such stuff, I’d imagine they’d be willing to give you further details about such things. (Maybe even the manufacturer details, so you can easily order them - OR BEST CASE even offer to send you a couple of the needed components via mail for some euros.)

I have just changed the bottom module for the 3rd time (i.e. bottom module no 4 (including the original component) due to malfunction in the mic. Where should I send the broken one for repair?