I have this issue now, worked this weekend but not today. I truly need my mic to work,

I also have had this problem, and wrote about it on here a month ago, no-one else picked up on it. Also emailed Fairphone support with no response, not even automated. I live in Australia so I can’t call them unfortunately

The bottom module was available again, delivered within 2 days. With this new module the microphone is working well. I can make phone calls without headset again.
I’m still waiting for answer from FP support, since 3 weeks now.

Hey there, please find relevant information here, to check if you have an issue with the primary microphone of the Fairphone 2 or not:

I’m having the same problem, my microphone doesn’t work in a regular call or recording a video. It sounds like interference or wind. But if I put my phone onto speaker it does work… Not convenient to have all my phonecalls on loudspeaker for everyone to hear…

How did you get on with support team? This is exactly what is happening to my phone…

I am having the exact same problem on my FP2. Suddenly the normal call mic stopped working so people can’t hear me on calls unless I put them on speakerphone. It’s a total nightmare as I run a small business. I really want to recommend Fairphone to people because it’s a great idea but I can’t do so in good faith considering the repeated multiple problems I have with it.

I’m going to try a hard reset this afternoon and then try to find time to look at the bottom module. Is there a video/diagram/set of instructions on how to remove and replace it anywhere?

You can use Sylvain’s instructions on how to test whether you need a new module. There’s a quick video on Fairphone’s support website about how to replace a module (or click here for a direct link to the video on Youtube). Note that the video replaces the top module, rather than the bottom module, but the screws are clearly marked. If you prefer step-by-step instructions with pictures, you can find those on iFixit here.

I thought I opened a ticket, but let me try again.
Thanks!

Having a lot of problems with my fairphone 2! The microphone started crackling about 3months or so ago and has since stopped working entirely also the phone randomly restarts, the screen regularly goes blank, it isn’t charging reliably atm (I have tried multiple chargers), the back cover completely disintegrated, I’m on my second cover but this arrived with cracks in and another has developed in the corner. Has anyone had any luck getting through to fairphone? I have filed two tickets, the most recent of which was almost 6weeks ago and I’ve heard nothing. I love what they’re trying to do here but this is driving me insane!

Did you try what has been written above?

Did you already have a look at this?
https://fairphone.zendesk.com/hc/en-us/articles/213161166-My-microphone-does-not-work-properly

Are you using the latest software?
Check also this:

The Troubleshooting tips moved here. Original Post: Mine has started rebooting on a regular basis as well. I've tried a factory reset and it doesn't seem to help. Its rebooted about 15 times today so far. Last night the touch stopped working so I couldn't enter my pin after a reboot, it took a lot of attempts before it would respond. Bit dissapointed. Quick question, does anyone have the Peace of Mind thing on theirs? Mine doesn't apart from once today when it randomly rebooted I could s…

If it is during phone calls, see here:

Solution: Please follow the official troubleshooting tool.
archived text
Original Post: I know that there are similar threads here already mentioning a too sensitive proximity sensor, but I do have the opposite problem. During phone calls the proximity sensor doesn't reliably detect my ear being close to the phone and keeps switching between turning on and off the screen. Which also has the annoying implication that during calls I regularly end up in all kinds of different menus, mostly somewhere in…

More generally, if you experience problems also have a look at troubleshooting here:
https://fairphone.zendesk.com/hc/en-us/categories/200154545-Fairphone-2

Has anyone had any luck getting through to fairphone?

:sunny: First things first: here is the fastest and best way to contact support: Send a request to support Write the IMEI and Order number in the ticket title If you didn’t buy the device directly from Fairphone provide proof of purchase in your request Write down your ticket number, call support and tell them the number. This way you will skip the backlog and your request will be handled immediately, but also will it be handled much faster so doing it like this actually helps decreasing the …

I am having the same problem. As far as I know it worked perfectly fine until I updated to 1.7.1 (I was at something way earlier, 1.3 or something similar). If it was hard to understand me before, people just didn’t tell me. But after the update people didn’t understand me at all anymore when I talked to them, unless of course I put the phone on speaker mode.

Reading through this thread I tried some of the things suggested. I poked a little in the mic on top and tried to clean it. I did test calls with the phone and I was able to hear myself again after that, but there was a lot of crackling and background noise, especially when I properly put the phone next to my ear and my hair were in the way as well.

After that I took out the top module first, to maybe be able to clean it more, since it had worked at first. In the core module I poked through the little hole above the microphone. On the inside it is covered by a small black tissue, but mine was loose on one side (maybe because I had poked at it before) and seemed to be misplaced a little. I am not sure it covered the entire hole.
The actual micro looked clean and fine.

Then I also took out the bottom module, but I couldn’t find much that I could have done other than blow in the hole again, so I put it back in.

Restarting the phone and calling myself again there were noticeable differences, however it got worse instead of better: on normal phone mode I couldn’t hear myself at all again, and on speaker I could hear myself only faintly with a lot of crackling. On the fairphone side however, there was a loud background noise now. It wasn’t crackling, but more a constant humming of sorts.

My flatmate has a fairphone as well. I want to try to export her version of the dialer app and use it on my phone, because I am still a little hung up on the fact that I only noticed a difference after I updated. She still has an earlier version, 1.4 I think, so I want to try that.

Update: Using the older dialer version really didn’t help at all. I’m going to order a new bottom module now as well and hope that I’ll get it refunded.

I’m going to order a new bottom module now as well and hope that I’ll get it refunded.

Please contact Support first and ask for a replacement. You’re doing everybody who needs help from support a favor if you don’t increase their workload by having them investigate in retrospect whether your bottom module’s replacement would have been a warranty case.

I am sorry, I ordered it already

I didn’t know this would make things harder for support. I’ll keep it in mind if I need a replacement again, thanks for letting me know!

Hi just wondering if you got this issue resolved? I haven’t had my F2 phone for very long and already he microphone is not working? Can you let me know how you fixed your problem. Thank you.

Same problem for me for the last 2 weeks. Funny thing is I can have the mic back if I plug the USB charger and move it slightly upwards, so now I know quite for sure it’s a connection issue between the module and the motherboard.

I removed the module and it looks like the metal connector is not flat, but rather concave, as you can see on the pic enclosed. 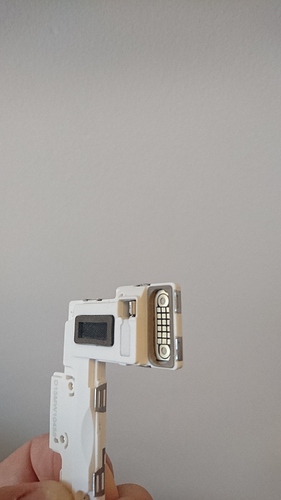 I have now the same issue. First the people I was calling complained about loud noises, and today my microphone stopped working completely.
I noticed the same thing as @Nicolas_Rabaud, putting my charger in the phone and using it to press the bottom module towards the screen make the microphone work. As soon as I stop pressing the mic stops working. I tested with calls and a sound recording app.

I will contact support but I am also thinking of buying another phone as I already got my motherboard replaced after months of waiting (random reboots + many other issues), the screen now displays bright spots (Bright spot on the display) and my mic stopped. I thought I bought a fixable phone, not a phone which needed constant fixing. Also the point of fairphone, i.e. not trashing electronic is just completely lost. I didn’t have to change anything in my previous phones, and they lasted more than the official 5 years of Fairphone.