Hi Folks,
I’m looking for a transparent-translucent rear FP2 shell ; the one that was sold with the phone previously.
Is it possible to get one at reasonable price ?
Thanks for your next replies.

It’s like Lidwien said - they were faulty, and there can’t be too many left that aren’t broken.

When I get home tonight I’ll look in my big box of spare parts to see if I still have some of the old black translucent cases (all broken and repaired). If I do, I’ll post some pictures and if you still want one, it’s yours for the price of shipping.

Thank you for your replies.
@robbert.f : Many thanks ! I’m living in France. Were are you located ? This will give me an idea of the shipping price.

He’s from the Netherlands

I have been doxxed!

They both broke in the same place, and I repaired them both with superglue and bits of wire. It doesn’t look great but it’s a very strong bond.

The one on the left has a hole for the USB expansion port, because I was screwing around with that port at one point. The case as a whole is in a better state; the other case doesn’t have the hole but it’s gone a bit more matte from use (so it’s farther along to falling apart - it’s something about the plastic being degraded by the oils in our skin, if I remember correctly).

I just looked up the cost of shipping, it’s €4,65 for a padded envelope with some cardboard reenforcement, which ought to do the trick. Let me know if you want one, and if so, which one. And if you don’t want either because they’re too janky, that’s fine too, they’ll go back into the box.

Thank you very much rmf, that’s very kind of you.
But it’s not the shell I was thinking of, there was a much clearer translucent shell.
Thank you for your suggestion though.
I wish you a good day.
lool

Is it the one, which was sold in this thread, you are looking for: [Sold] Selling FP2 with new camera moduls and extra case in Germany ?

You cn try to contact the seller bei DM, if he can forward your request to the buyer. He probably doesn’t need the additional case.

The case in that post is not a slimcase, though, if that matters to you. You’ll notice that FAIRPHONE is written sideways on the case, as was the style for the old fatcases.

Edit: if you are interested in a transparent fatcase, you’re in luck because I just looked and it turns out I’ve got one, still sealed: 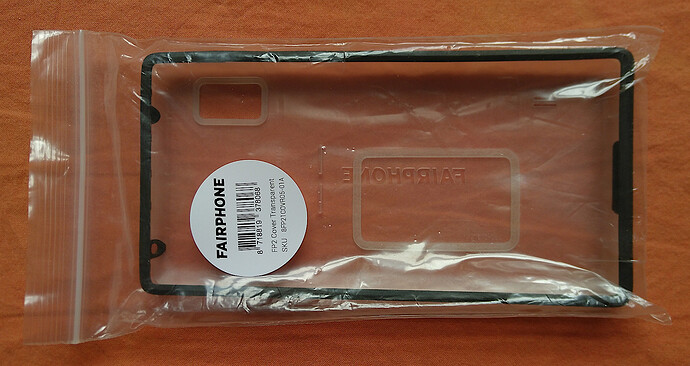 Again, yours for the price of shipping if you want it. And again, if not, then it’ll go back in the box.

There was never a transparent slim case, as far as I now.

There was. It was released (and discontinued) at the same time as @robbert.f’s black translucent ones.

Yes rmf, I think this is the good shell.
So, how can I send you the cost of shipping and also give you my own address ?

There definitely were - and we have the pictures to prove it because everyone and their uncles posted pictures of their transparent cases as they started to disintegrate!

Two weeks ago i bought a transparent slim case for my FP2. Crazy as i am, because who the hell is willing to pay more than 30 Euro for a simple piece of plastic. But now, the case is showing cracks and fractures at two edges. And this without any reason. Has anyone made a similar experience? Could it be, that he material of the transparent case is low quality? This would be very annoying. [IMG_20180602_131029][IMG_20180602_131048]

A friend of mine is actually still walking around with a transparent slimcase, held together with glue and tape. He loves the look so much it doesn’t bother him that bits fall of his phone every now and again.

I wonder if the old transparent cases are made of the same stuff, but I never saw cracking in those cases. Maybe the rubber just gives out sooner than the plastic so it never gets to that point.

Ok, thank you, Im getting old :). I thought I remembered there were no transparent/translucent slim cases, as there were many problems with the material. I liked my black translucent ‘fat’ case, that came with my FP2 and ordered 2017 a white slim one to replace it, because no transparent or translucent were available.

It’s such a shame they all broke, because they looked fantastic. I wonder if consumer 3D printers are at the point where they can make replica transparent slimcases, because I still want one.

In case anyone else is also interested, I believe I also have one of those (originally packed) translucent ones at home. PM me if relevant for anyone out there.