Same with me. I installed the 21.Sept. build, but it says the security patch level is still 5. August.
It’s the same with my MI3 running LineageOS, too.

Maybe some blob is still required updated? I’m on the newest modem.

Removed build 20170921 as it didn’t contain the patches for blueborne, trying again now.

Btw., I had a spontaneous reboot also with the one from 20170921. This time it has been laying on the table without charger.

Btw., I had a spontaneous reboot also with the one from 20170921. This time it has been laying on the table without charger.

Removed build 20170921 as it didn’t contain the patches for blueborne, trying again now.

No change … still Vulnerable according to Blueborne Scanner … and still patch level August 5.

The odd thing is … I had Bluetooth disabled from the start, because I never use it. Shouldn’t this make my phone not vulnerable?

Edit: This article here speculates whether the scanner just checks the patch level to determine the vulnerability.
Let’s just assume that this is true, then it would at least explain how the App can say “Vulnerable” with Bluetooth being disabled. And in a sense it is not so wrong as I first thought, because I could well enable Bluetooth, and according to the patch level I would then be vulnerable. Still … with everyone and their dog now telling me to turn Bluetooth off, and the App still just saying Vulnerable … the wording could be more detailed

Yes, but only as long as you leave Bluetooth disabled… So, the scanner tells you your device is vulnerable as soon as you activate bt

Seems like that app is an example of a confusing, bad-designed app. If it only check the patch level, then it doesn’t need to turn on the Bluetooth at all. Otherwise, if it need the Bluetooth turned on, then it should ask you to actually turn it on before issuing a final result.

For the device check, it does not need bt. But it can scan for devices around you (you fitness tracker, for example), and tell you whether this device is vulnerable, too…

There was a problem with getting the new code from the lineage repositories. Building a new build now which should fix blueborne. Will update you guys later today!

Ok, the building is fixed, and now security patch level is the 5th of september. Also blueborne reports a secure device: 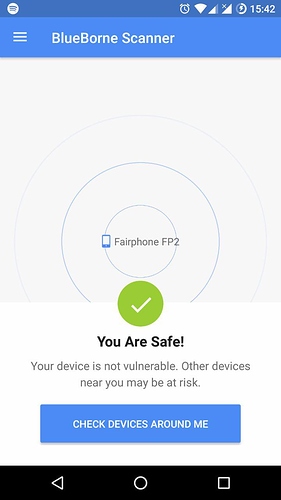 I second that. My 2 devices updated perfectly.
Good job!!!

Ok, the building is fixed, and now security patch level is the 5th of september. Also blueborne reports a secure device:

Should i Update first to the September 11th version or can i do it directly to the 25th?

If you are on the OTA release, you can go directly!

according to https://forum.fairphone.com/t/fp2-fairphone-os-17-10-1/33574
the Google-infested OS has patchlevel of next week (how is that even possible?)