So I also installed Pie

It was a clean install, as I was encrypted before, did look good, but it would not let me in. Wiped everything, installed ROM, Magisk and OpenGapps nano (want to experiment with Magisk also). Restored from TiBu Backup, the rest from my computer.

I had one spontaneous reboot, unfortunately, last_kmsg ist corrupt, but here is it anyway:

Will start to to check now the phone and all apps.

First impression, among those stated above, it’s fast, and very battery efficient

Trust has given a warning ‘This build was signed with public keys’, where I don’t no if this is really an issue or not.

I had this too.
And it appears everytime i reboot or turn on the phone.

I have the impression, graphics performance suffers a bit

Thats my impression too. Especially at the navigation bar.

When I choose that the stock camera app should save the pictures at the SD card it doesn’t use the standard DCIM folder. Instead it saves the pictures in another folder as you can see at the screenshot.

Does anybody can confirm this? Or is it a individual problem of my setup?

Does anybody can confirm this? Or is it a individual problem of my setup?

I can confirm this, picture is not in the default directory under DCIM.

Another bug. Some apps did not have network allowance in app settings. After switching network usage on for those it had no effect, only after reboot

First impression, among those stated above, it’s fast, and very battery efficient

Regarding TWRP-compatible encryption, I just tried the following …

When booting 16.0, I was then surprised when I got asked for a decryption password, when none was set.

Other passwords are being declared as “Wrong password”, while “none” results in the “Decryption unsuccessful” screen.

Does anyone know whether this is a Pie-feature, or the ROM’s: I’m not sure i can set the notification volume, but i have call volume (what’s this?) and ring volume. Before, i could set volumes independently

Thank you Chris! Is there a Github repo, where we can track these latest changes :)?

I think, this is it what you are looking for…

I’m constantly losing that link ^^… thanks!

Is there no way anymore to manually set the accuracy of the location? In Android 8 there was “high”, “power saving”, “device only”.
Didn’t see it in Android 9. Just “on” or “off”.
How do I know if GPS is used or not?

It’s not exactly like Android 8, but in Parameters > Network and Internet > Wi-Fi > parameters of search I found those two options (sorry it’s in French): 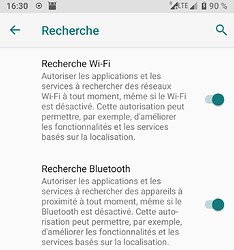 Those are now in “Security & Location > Location > Extended > Search” for me (my UI is in German so those are probably not 100% the English terms).
Seems like there is now way to enable/disable GPS specifically…

So far, everything works. Looks smooth.
I can not confirm Oli.Sax’S problem with the download manager. For me, It works fine.

I will continue to test it the next couple of days and report back here.

Re LEDs: one app (wire chat) which had no explicit led setting in the app, now does not use led notification at all. Before, my app specific setting was applied…

I tried today to copy a file with a file manager from internal storage to the sd card, that is configured as ‘mobil’ and not ‘internal’.
When selcting the destination folder on sd card, I’m asked ‘please chose first the sd card’, and when clicking on ‘select’, a message appears ‘authorisation failed’.

Has someone else faced this, and solved it?

Today my first day with it in real life. I left my flat at 06:15 in the morning. I did everything I usually do with the phone, writing some texts, listening to music, surfing the web, doing calls. So far everything works like it should. Back at home at 20:30, still have 25% battery left. Ok, I don’t have so much screen on time, but during work I listened around 5 hours to Spotify.

For me it seems that also the standby time is quite good. So far, I am quite impressed.

Edit: this morning in the train I tested my wireless headphones, they also work.