“To make the deal extra sweet for our first backers, we’re offering a limited-edition Fairphone 2 to everyone who orders before 30 September. The phone will look the same from the outside, but when you open it up you’ll see something special that lets you know how important you are to us.”

This was written in the mail I got back in july… Do you know what the surprise is? Is it that it mentions “one of the first 17 418”?

I think thats it

Some might find this specialty a bit on the disappointing side, but to be honest, I actually like that again, Fairphone does not provide a super dooper exclusive limited edition, but just a lasting symbolic recognition of early support. Might be my wishful thinking, but I recognize a belief in equality in this.

Another thing I found on the back of the phone was this: 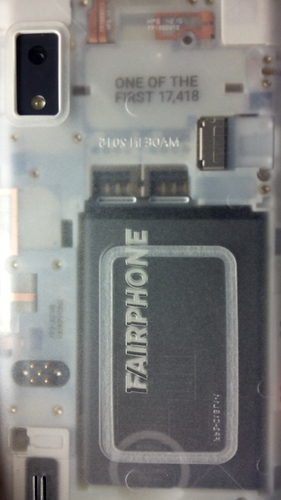 At first I thought, where is this ominous place? Why do they write the zip code of the production site and not the country? Only when actually read the mirror writing I realized it was in fact the year!

I’m all for “symbolic recognition”! I feel proud because I really believe in the philosophy behind fairphone…

Do you think that the number is what they meant?

Yeah I’m pretty sure that’s it.

I like it because it adds to the overall storytelling power of the phone. When one of our grandkids digs it up out of a box in the attic, we can chuckle wryly and say “Ah, yes, my child, back before the great scourge destroyed all electronic technology there was a thing called “Crowdfunding”…”

I think it is a nice idea to mention in one or the other way that the phone was bought during the crowdfunding period, though I also really like the “yours to open, yours too keep”. So in a way I am not really sure if I actually would have preferred the regular message there. I do like though the production date written in the phone.

I generally think it is a nice gesture. But expected maybe to see my individual order number printed somewhere which was around 96xx.