“Keep Wi-Fi on during sleep” setting is gone in LineageOS 15.1

The “Keep Wi-Fi on during sleep” setting is gone (meaning you can’t turn it off anymore, it’s always on in Oreo). 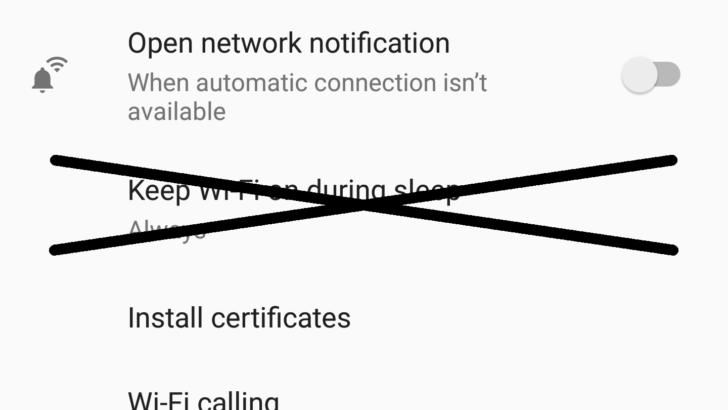 If you have an incredibly detailed memory, you may recall as far back as around 24 hours ago, when we talked about how the "Keep Wi-Fi on during sleep" set... by Ryne Hager in Android 8.0 Oreo, Google, News

The ADB workaround linked to in the article doesn’t work for me.
Other options?

I wanted to try this because Wi-Fi seems to be the main battery eater when my phone is idling around at home.

Oh, WTF, Gobble… really? They just want their f***ing Gobble services to be active anytime… what a disrespectful regression.

They seem to have moved the settings command to a subcommand of cmd and I can no longer make it work. No help command or anything, irritating. I’ll try to find the options in the Android source code tomorrow if I find the time.

Yeah, not sure how feasible this Android thingy is on the long term with changes like these…

Well, I needed to use a computer. No longer works from the privileged Terminal app, not even with su,

$ adb shell settings list global lists wifi_sleep_policy=2 on my FP2’s LOS for microG 15.1 installation (upgraded from 14.1) and my Nexus 4’s official Lineage OS 15.1 (installed from scratch, so I’m sure it’s not a residual config).

I successfully changed it to 0 with $ adb shell settings put global wifi_sleep_policy 0 on my Nexus 4. I don’t know yet if that effectively changes the wifi behavior, though. It seems to be completely deprecated in Android 9, so I won’t bet a cent for it in Android 8…

I don’t know yet if that effectively changes the wifi behavior, though.

The ADB workaround linked to in the article doesn’t work for me.

… I could set the setting via ADB, but it doesn’t result in anything, WiFi stays on as far as I can see.
And it’s a bit funny you can enter any fantasy phrase as a setting that way

… I could set the setting via ADB, but it doesn’t result in anything, WiFi stays on as far as I can see.

I thought you had some issue changing the setting. Ambiguity,

As far as I can understand, it’s just a settings store. As long as nothing reads it, it doesn’t matter whenever there are exotic name-value pairs, I guess.

Well, while to me Easer seems not very intuitive, this seems to do the job for me for now … I can see WiFi is off at the moment when I turn on the screen, and then WiFi is reconnecting immediately

I’m open for more efficient Easer proceedings for this.
And I hope running Easer and using the mobile network for the background tasks I still want to run don’t eat more battery than WiFi

Edit: I tried to replace the Conditions with Inline Events in the respective Profiles (which would have rendered the steps to add Conditions unnecessary), but with no success … so this FAQ seems somewhat credible when it says you should use Conditions instead of Events.

I got encouraging results with Easer

Clever. I’ll try that too, thank you for the detailed config!

to me Easer seems not very intuitive

It’s not only you, I can relate.

I had it running now for a couple of hours … and for me it doesn’t make a difference for the battery.
WiFi is seamlessly replaced by mobile network in terms of battery usage … I have bad mobile network reception at home, so outcomes may differ for others.

Woah, I configured Easer with your setup. The only thing Easer has changed since I first tried it is the icon… what a clumsy user experience

My usecase is using my Nexus 4 as a tablet in my home. I don’t use mobile data in it. So I expect some battery saving, at least.

Edit: it doesn’t seems to work at all in Airplane Mode. “Profile failed to load in full”. It works with a SIM inserted and active, so probably Android forbids changing radio states in Airplane Mode,

@AnotherElk I’ve catched this new app at F-Droid: SleepyWifi (Disables the Wi-Fi when the phone is in sleep mode) - https://f-droid.org/app/nl.devluuk.sleepywifi

Although I think Android did some optimizing in the meantime for me. Battery usage went down from 2%/hour to 1%/hour when I’m not using the phone (apart from some automatic background stuff).
Not bad without me doing anything to achieve that.