That works too indeed

But the PWA solution is also great to have as an option. Especially if there are people that don’t want to have a Play Store installed.

But there’s no need to use a store if you don’t mind a download from apkpure for example. 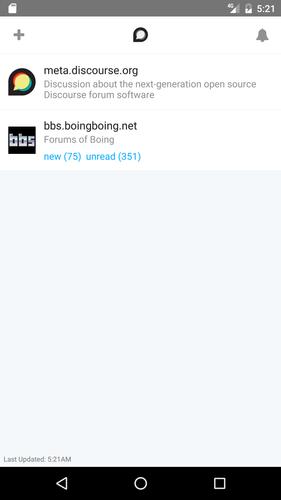 Then you also have to manually keep track of version updates. PWA allow us to break free from app stores without compromises

What would you like done? Simply put: We want to show our discourse website in a mobile app with notification, and list the mobile app on both stores. Make Discourse forum into a PWA app on Android and IOS with push notifications. The app should...

A forum I host myself (also using Discourse) works fine on my computer and smartphone as a PWA.

Introduction Install the forum on your device in order to receive notifications on your smartphone (see screenshot below) or on your computer. These notifications may be fine tuned in your profile settings. ...

It is possible to install Discourse forums like these as an app on your phone.

Nothing much to do with Discourse, I believe.
Any website prepared to be a PWA can be “installed” to the home screen and behaves like an App then. Google Maps, too, for instance.

It can get a little tricky, though, in case a PWA is exactly what you don’t want to have on the home screen

Firefox 82: Force page shortcut onto home screen instead of installing a PWA Discuss

I just now stumbled upon this small problem, and I thought I might as well share it. I’m currently using Fennec F-Droid 82.1.3 (Firefox built from its sources the F-Droid way) on /e/ Android 10 (Fairphone 3) and /e/ Android 9 (Fairphone 2), but I suspect the problem to be somewhat generic. "Add to Home screen" or “Install”: When setting up your home screen, you may want to have shortcuts to websites on it. No problem, Firefox will let you do that via three-dot-menu - “Add to Home screen”. Un…

True, but it’s a builtin feature of Discourse, so I thought, why not use it?

But I see that this idea is not of interest for this community.

I wouldn’t say that based on two people answering.
Not everybody interested or even trying it out will answer, and inside a few hours to boot, I don’t know what you are expecting.

I tried to run this Discourse forum as a PWA some time ago and found the experience very underwhelming compared to having it in the browser.
I like to have Google Maps and a popular weather website around as PWAs, though.

Firefox indeed installs it as a bookmark on your home screen. Chrome based browsers install it as a “real” app in the app drawer.

So there’s a difference in how different browsers handle it. That’s good to know.
But I guess there will be no difference in the presentation of the PWA?

Try it out, install the one below in Chrome

I prefer it over a browser view. Also the notifications provide more context. It’s also easier to open a forum that way. It might increase interaction on the forum. But that’s all I have to say about it. It starts to become a long thread for the subject.

Is a PWA not just a web app? Or I don’t understand the difference.
I’m using the forum in Bromite (so modified Chromium) as a web app, and it works quite well. And you can also get notifications even if just opening it in the browser (I know this works in Firefox for instance).
I tried “installing” Discourse meta in Bromite and it became exactly the same thing as me “adding to homescreen” the Fairphone forum (i.e opening as a web app), and both not in the app drawer.
So I don’t quite understand what your point is and can’t see where you’re having a problem…

PWA stands for progressive web app, so in essence you’re right. But it behaves just like other apps in look and feel. So I don’t get why people here downplay it. It’s really nice

But it behaves just like other apps in look and feel.

I do agree with you but I fail to understand the purpose of your topic.
You ask:

Maybe someone disabled it for the FP forum

But I can’t understand the problem. I fail to see the difference between the PWA as you describe and how I myself am using the forum as a web app and working perfectly well. Maybe you could try to clarify

It works for you? Because for some reason I can only add this Discourse instance to the home screen and not install it as an app on my phone. It does work on my forum and the Discourse forum itself. So I started this topic to poke the admins to maybe troubleshoot this. Because using this site as an app is really convenient and nice, like any other Discourse site

The Signal forum also installs as an app.

Welcome to the community. For app support visit the support page https://support.signal.org/.

As well as the Fedora forum.

It works for you?

Well it seems to me what you are explaining is very near to what I get.

Because for some reason I can only add this Discourse instance to the home screen and not install it as an app on my phone.

Could you explain exactly the difference between the two for you?
For me adding to the home screen means that when I open the shortcut on the forum I get a web app with only the forum, no browser bar/options and so on, as if it were a single app. Only thing I don’t get is having it in the app drawer.
When I clicked on “install” for the Discourse forum, II got exactly the same thing.

I’m expecting the behavior as described in the link below. But it doesn’t work on my phone or computer. Other Discourse websites work fine. The admin deflected the problem unfortunately as well. Would’ve been cool to have this forum as an app on my future Fairphone 4 Introduction Install the forum on your device in order to receive notifications on your smartphone (see screenshot below) or on your computer. These notifications may be fine tuned in your profile settings. Computer How to install the TZMC...

I think the title of that support article is misleading, because the function behaves as @Alex.A described it.

Maybe this article is of interest to you:

Firefox 85 is Here, But Mozilla is Killing PWA Features - Thurrott.com

Mozilla released Firefox 85 this week, adding protections against so-called supercookies. But it’s also taking a major step back from PWAs.

It uses Chrome as well. Where it does work. This is not a Firefox issue.

Seems that way.
I just tried the /e/ default browser Bromite, based on Chromium, and it does the exact same thing that Firefox does to “install” a PWA.