How do I remove the "there's an SD Card" notification permanently? [Mild annoyance]

Every time my FP3 restarts (usually because of one particular game crashing, that is a different problem tho), I get a notification reminding me that my phone has an SD card I can store photos and multimedia at: 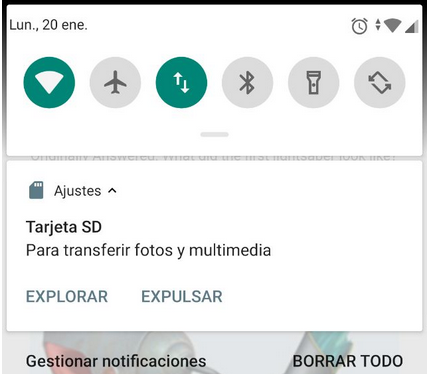 I can dismiss the notification alright, and it does not pop up again until the next time the phone reboots, but I still have to dismiss it manually every single time, and it is a bit annoying.
Some google-fu finds people with a similar problem in Samsung phones, and answers telling them to make sure the card is formatted at whatever filesystem Android 9 formats at by default; done that, didn’t help.

It is really not a serious problem, but it is an annoyance I would rather not have to deal with if a solution exists that does not require any drastic measures. Thank you all in advance.

Fix the actual problem which is your phone having to restart?

As far as I can tell, there is no way to disable this notification. Should a rootable OS appear for the FP3, I think it could probably be done with GravityBox (an Xposed module). So keep an eye out for FPOpen - or for the community members currently experimenting on their phones to get the kernel working.

I suspect this happens to those that used Google to restore their apps and settings automatically but swapped to a new/different SD card during their upgrade. A factory reset might work but whether it is worth it is a tricky call.

I suspect this happens to those that used Google to restore their apps and settings automatically but swapped to a new/different SD card during their upgrade.

As I didn’t do all that and get this notification, too, this doesn’t seem to be the issue.
It doesn’t bother me at all, though, I just swipe it away after a reboot.

Through the efforts of some community members, it is now possible to root the FP3 - at your own risk, of course.

On a rooted phone, it should be possible to use Xposed with GravityBox and its persistent notification control to permanently block this notification (though to my knowledge Xposed has not been tested with the FP3 as of yet).

I installed Edexposed with magisk and Riru and it works flawlessly, also have gravity box tweaks such as visualizer working.

On a rooted phone, it should be possible to use Xposed

Unfortunately, it’s not. XPosed is still not available for Android 9, which is the reason why I don’t update away from LOS 15 (Android 8) on my FP2. The main developer (at least I guess he is, since he maintained the topic on XDA) hasn’t logged in on XDA since February 2019, so I doubt he will update it.

There is a way to get XPosed working via a Magisk module, but as far as I know that’s rather sketchy and apparently also includes non open source software, so it’s a no-go for me.

The recent Android 10 upgrade has solved this slight annoyance!

And there was much rejoicing.