How Cyanogenmod could enhance Fairphones?

I forgotten to talk about default SMS app. They are some interesting improvement too, for example, as you can see here, you can activate sms popup, wake the device, or choose a dark theme if you like: 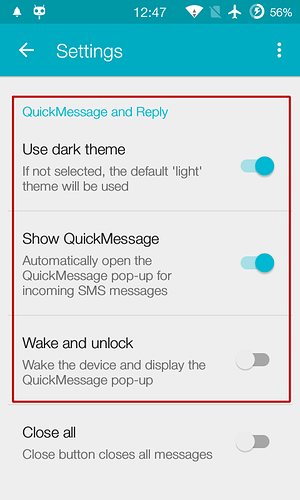 Please consider some of this described functions as feature request to improve next FairphoneOS.

Could you add your favorites to the feature requests thread (each feature as a separate post), so people can vote for them?

Dude, thank you so much. I used CM too and now i am missing a lot functions you described here. Like you i hope that some things will get it into future releases.

Others features who miss me :

When you push on volume button, you can set / verify volumes for call, apps, alarms 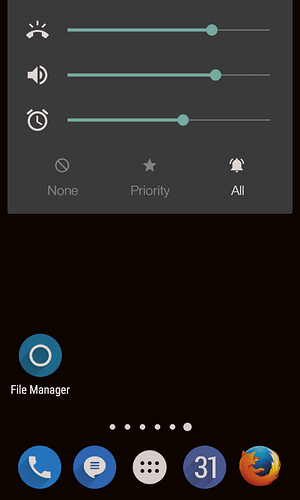 When you want choose to reboot (you can easily choose your reboot mode) (ok, not everybody need this, anyway…) 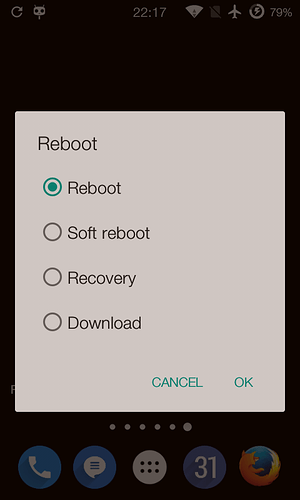 Another feature very simple, but who miss me every morning : i cannot anymore just shake or flip my phone to stop my alarm clock to snooze it 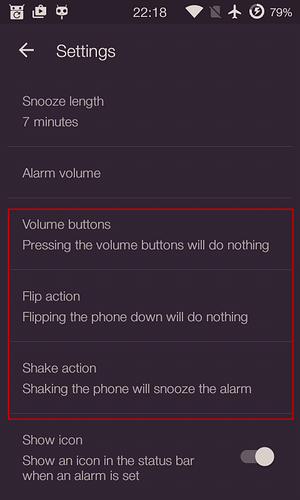 Many thanks to Alexisju. I have exactly the same feeling: missing a lot of CM functionnalities on FP2.

I agree with alexisju, and would suggest even that FairphoneOS be based on CyanogenMod, with F-Droid as the default software repository.

Honestly, I’d be much happier if Fairphone would just use Cyanogenmod instead of trying to develop their own software (I’m coming from an S2 as well, and it’s weird that a much newer phone actually runs an older version of Android). This might also speed up the update process to Android 6.0 (cyanogenmod 13.0). As it stands, the amount of customization you can do in FPOS is kinda minimal for a company that’s so prominently about openness. The features they add I either don’t really like (the launcher, I can change that so it doesn’t bug me except that I feel it’s wasted resources) or find completely useless (privacy notification. App overview already shows permissions, and CM’s privacyguard allows much finer control over what apps can and can’t access). The ability to change the quick settings drawer is actually removed (compared to stock).

Thanks for the detailed overview, alexisju!

Gravity Box brings all these features to Android, so why don’t you root your phone and install X-Posed + Gravity Box?

As I understand you need to install TWRP instead of the stock recovery, which does not work with an encrypted phone.
And what sense does it make to gain more access to decent privacy framework (like x-posed) when in turn you have to give up encryption over your data?

I also would like to see CM on the FP2 rather then FPOS. I had CM on my old Samsung Gio, which I had before my FP1. This is now years in the past, and I still think that that old CM was much more convenient, user friendly, and more privacy concerned than FP2OS is now, years later.

I use already Xposed and Gravitybox on my rooted FP2, but it is not the subject of this thread, if you look at the title.

The title says “From Cyanogenmod to FairphoneOS”. I don’t fully understand, why one needs CM, if most functionality can be installed using Gravity Box. The only reason I do understand is the following:

As I understand you need to install TWRP instead of the stock recovery, which does not work with an encrypted phone.

This thread is about the operating system running Fairphones, not about Xposed, root or other customisation for advanced users only.

It seems to me that CyanogenMod is also for advanced users, given the abundance of possible settings. The majority of smartphone users want a simple phone, and Android provides them with such.

So I don’t see the difference (leave away the encryption) between using CyanogenMod on your Fairphone vs using Fairphone OS with Xposed Framework and the various modifications.

I think that not preinstalling Android on the Fairphones, but CyanogenMod would put off a lot of users because they want an operating system which is widely used. In fact, CyanogenMod is just a modified and expanded Android, without too much acceptance in the public.

Thank you to share you point of view. Just a question : did you ever used a phone with Cyanogenmod?

CyanogenMod is just a modified and expanded Android

That’s why I actually do not understand your point.
I don’t think it lacks acceptance, I think most people are just afraid of flashing a custom ROM on their phone. Probably, if a phone on the mass market would come with CM instead of regular Android, most users wouldn’t even realize the difference. But that of course is speculation.

The point is that CM offers much more flexibility for the users, plus more privacy features. Talking about flexibility or customization: Stupid things like this could easily be avoided, if you simply let user decide which shortcuts to use, instead of the developers. I was actually shocked when getting my FP1, after using CM, how limited the user is with customizing the OS.

While still hoping to once find a port of CM for the FP2, for now I think it is more likely to get Android 6, so that at least more privacy settings will be available. But honestly, with the current software situation I am again struggling a bit with another FP.

Well, according to https://en.m.wikipedia.org/wiki/CyanogenMod, there are like 50 million users… And with their installer it’s supposed to be very easy to flash cm. BTW, I don’t think it’s more complicated to use because of the options. Many people like the flexibility, to make their phone more “shiny”. Just look at the number of themes you can get for the cm theming engine. There are even themes that cost something…

When FP started selling Fairphones with FPOS in the beginning there was no one already using FPOS, but many using CM. So I don’t really see your point. (and both CM and FPOS are Android, with CM being a lot closer to vanilla android than FPOS is)

CM is for both, advanced and standard users. You can customize a lot, but no one has to. And yet it is just working.

The thing is: If I want a customizable vanilla android (feeling) on a FP, I have to install a Launcher, install Xposed, install extra apps etc. With CM I just have to flash CM…

As I understand you need to install TWRP instead of the stock recovery, which does not work with an encrypted phone.

As far as I know, TWRP installation should work. The point is that TWRP will not be able to access the data partition.

However, as I wanted to have XPrivacy, I came up with a workaround: To get XPosed, the only thing you need TWRP for is to flash the XPosed-zip file. So I did the following during the setup of my phone (see also the TWRP tutorial, which also includes the instructions for installing XPosed):

I guess that steps 3 and 5 are still possible after encrypting the phone, but I’ve not tried yet.

Anyway, bottom line is: If you want to have the XPosed framework and its modules with an encrypted phone, backup your data, do a factory reset and then follow the above steps.
Hope, this helps.

Edit: I haven’t been completely satisfied with the solution above, cause with each OS update I’d be forced to decide between letting go XPosed framework & keep my (encrypted) data or erasing all data to be able to flash XPosed again. However, I now realized that it should be possible to avoid that by putting the XPosed-zip file onto an external SD card, cause then it will be accessible by TWRP! I haven’t tried yet, but I think this should work.

Although that thought looks rather obvious and others might already have figured this out easily, I didn’t. And so I share it with you (hoping it helps somebody).

I also forgot to talk about Group management, into defaut contact app, wich is also availaible with Cyanogenmod.
This is currently missing in the FP2 contact app. 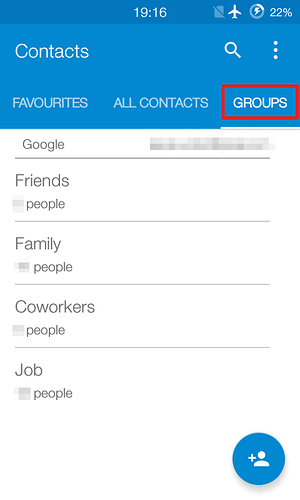