Headphone Jack too small for 3.5mm

Hi everyone, although the phone specifications clearly state that the FP2 will come with a 3.5mm (standard) earphone jack, my earphones will simply not fit into the hole! I’ve checked that there’s nothing blocking it; it is simply that my standard headphone jack is too wide for the hole it’s meant to go in. It almost seems as if it’s meant for a 2.5 mm jack, but that’s not what I was expecting! Has anyone else noticed the same problem?

Can you show a photo to us?

Used the port with different 3.5 mm - Devices and everything worked well.

there are 3,5mm headphone jacks with different sizes:

A phone connector, also known as phone jack, audio jack, headphone jack or jack plug, is a family of electrical connectors typically used for analog audio signals. The phone connector was invented for use in telephone switchboards in the 19th century and is still widely used. The phone connector is cylindrical in shape, with a grooved tip to retain it. In its original audio configuration, it typically has two, three, four and, occasionally, five contacts. Three-contact versions are known as TRS c...

Could you post the exact sizes of your headphone jack?

And you can check the size with a caliper to make sure it has 3.5mm.

there are 3,5mm headphone jacks with different sizes:

How can a “3.5mm” jack have different sizes?
Either it is 3.5mm in diameter, or it is 2.5mm, isn’t it?
Or dou you mean the length? But also the length should not differ, because it is standarized (and mono, stereo, headset just differ in the number of rings, not in length, afaik.)

@Nathalie_Bienfait:
A photo would be really helpful (one of the jack, one with jack inserted in the FP2).
Maybe you only mean, that the jack is just 1-2 mm to LONG (not to wide), as you can see at this pic (from this post)?

The left side of the image are taken WITHOUT the case, the right side is with case.
As you can see, the 3.5mm-jack sticks out in both cases for some mm - that seems to be normal.
In this case, everything is correct, thats it is standard with FP2!

When I plug in my headphones there is a bit of resistance (more than I’m used to when using other 3.5mm jacks), but they do fit. I’ve used three different (3.5mm) headphones with my FP2 and they all work fine. When fully plugged in it looks like on @therob’s photo.

@therob:
yes I meant the lenght

The reason why there are diffent “sizes” is explained in the Wikipedia page I mentioned.

In my activity I have to deal with different dance teachers who plug their phones and tablets on my mixer, and I can say that the problem is not specific to the FP !
It depends a lot on different phone brands, pouches, covers… My solution is to have a very thin jack extension, a few centimeters long, which appears to be much more tolerant over different connector situations.

As a more general thought, I find quite interesting that our modern gadgets still make use of a connector created in 1878 !!

most audio jack issues of FP2 are clearly a problem of a design flaw of the case. E.g. high quality jacks of better headphones can not be fully jacked in. Jacks will work when removing the case though (but who would want to do that?).

@Fairphone: Your Problem is that you can’t just re-design the case to solve the problem, there is just not enough space. You would have to re-layout the audio module or offer a workaround with an adapter.

To me this problem seems very strange as lots of people use headphones to make phone calls. In addition to this, probably 99% of smartphone users use it to listen to music on the go and audio therefore is the no. 1 feature and should be tested accordingly.

E.g. high quality jacks of better headphones can not be fully jacked in.

Sorry to contradict you on this statement.
My headphones do work flawlessly, the connector fitting perfectly.
And they are clearly not from the cheap goods section, although not high end either.

To me this problem seems very strange as lots of people use headphones to make phone calls. In addition to this, probably 99% of smartphone users use it to listen to music on the go and audio therefore is the no. 1 feature and should be tested accordingly.

You’re right. Lots and lots of people use headphones and a very little number of people report this issue, so either they have cases or bottom modules with production flaws or headphones with badly designed or flawed pins.

I have looked into this a while ago and this is what I found:

I just went through the 4 threads you linked to and found 18 people reporting the issue only 4 of which still reported it after a module replacement and of them 3 tried with the same cheap headphone.

So from that small sample it looks like the main reasons are:

I have this problem with Sennheiser HD 25, which could be considered the standard of headphones.

Is there a way to get a replacement module before sending in your own module/phone?

I would suggest to check with another FP if your jack fits, first.
You can easily find some helpful person in your area at one of the local meetings or on the #fairphoneangels list.

So here’s what I did. The slightest touch would disconnect one channel from my Sennheiser HD 25s, a little bit more movement and they’d disconnect completely. With the modified backcover the plug goes in about 1 mm more and reaches the bottom. I’ll check tomorrow, if this makes listening to music over headphones with the phone in pocket possible, since I couldn’t do this before. Another audio plug fits good as well (edit: with the modification), but I found a Cordial plug that needs even more space than in the pictures. All other devices I have here (broken Galaxy S4 and Galaxy S5 and a Galaxy Note 2014) have the plug shaft reach the bottom with more of the plug standing out, so that the connection is better (last photo). 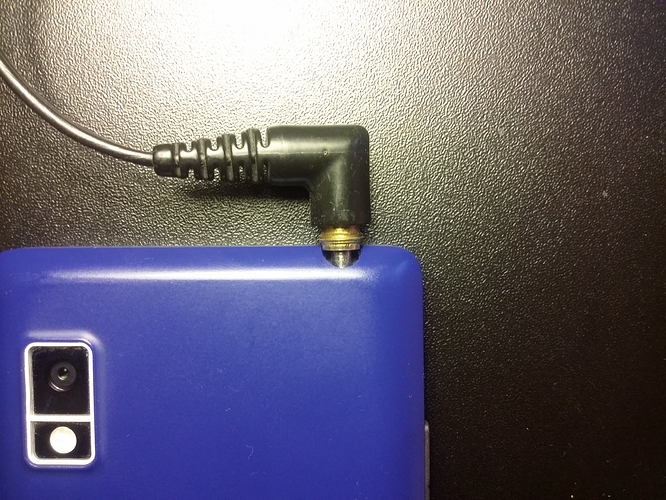 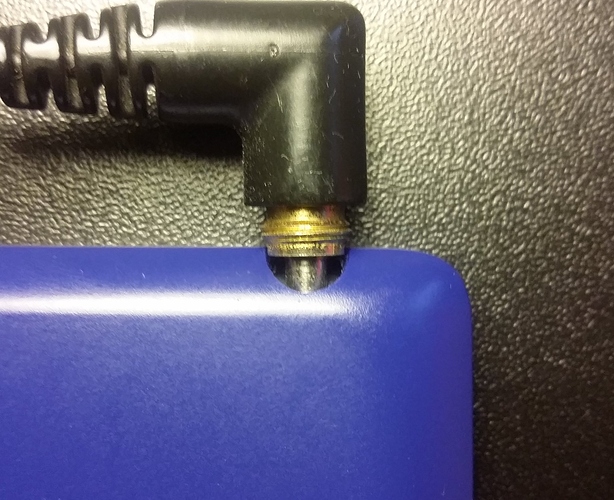 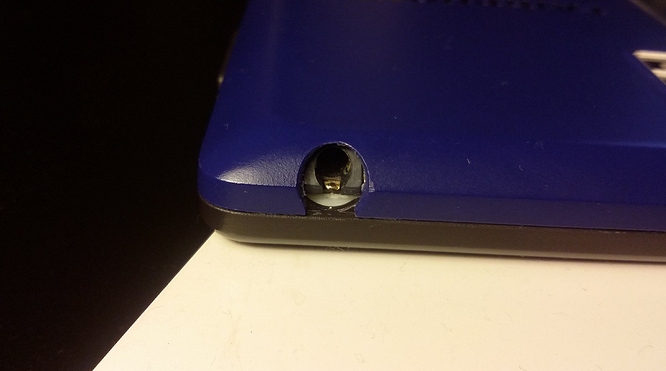 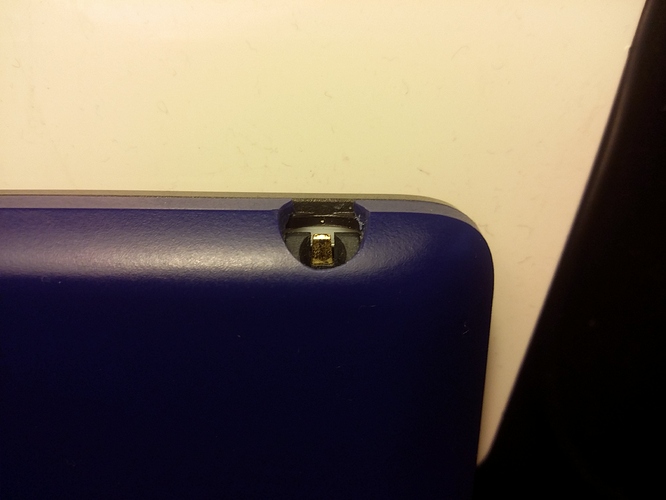 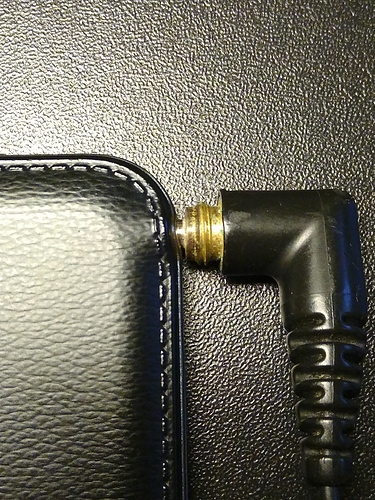 Perhaps a different connector could do the trick … https://www.google.com/search?q=3%2C5mm+audio+90+degree+adapter+4+pole+male+female (90 degrees because the parts are small that way, I didn’t find a simple extension cable just a few cm long

My customization didn’t really solve the problem. It got better, but listening to music with the phone in my pocket is still a temporarily very limited pleasure.
One last question before I either try to get a replacement module or accept the situation:

How do the last milimeters feel, when you push the plug in the socket or the first milimeters, when you pull it out? When I compare my Fairphone to other devices, it goes in and comes out way easier on the FP. On other devices, the last or first milimeters need an extra pull/push and it clicks, when it snaps out/in. On my FP there is no snapping. Especially when you rotate the plug a little bit, it goes in/out with a constant push/pull.
Is it the same for you out there or nah?

There are several manufacturers hence versions of such sockets on the market. I can only state for the 6,5mm version that when a plug is almost fully inserted a noticeable “snap” can be recognised.
But the smaller the plugs are (3,5mm/2,5mm) the softer they often un-/plug. I doubt there’s someone out there who can clearly describe how it feels when the plug inserts partially or to the fullest.
You may request another top module and end up with the same problem after all. But as other users here already have recommended different headphones may help or at least a short extension cable.

Is there a way to get a replacement module before sending in your own module/phone?

Sure, order one in advance and get a refund if yours turns out to be defective.