It is more a security issue. I have a turkisch sertivicate. So I thought I turn it of. Now my GPS is not working. Why is Fairphone using a Turkisch GPS systeem? Second quistion: How can I use a european gps tracking system? 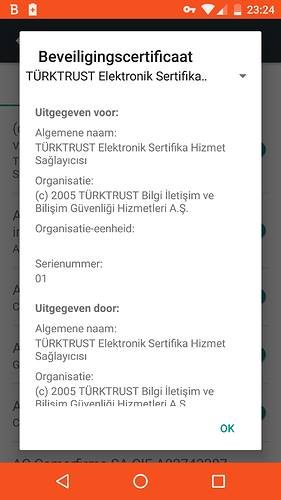 Now my GPS is not working.

How can you tell?
I’m asking because it is unclear to me how a certificate would be connected to location.
Does perhaps a website using location not work anymore (because the website perhaps depended on the certificate)?

Why is Fairphone using a Turkisch GPS systeem?

There is no such thing.
(There is this terrain based military system though.)

How can I use a european gps tracking system?

Maybe your GPS just lacks GPS offline data. For calculating your position, GPS needs knowledge of orbital satellite positions. Normally this is acquired through your internet access. It can be extracted from the satellites data stream, so fully offline operation is possible, but that is considerably slower than through an internet connection.

The certificate you are showing has nothing to do with GPS. What app is showing you this certificate?

Edit: the certificate you are showing is an SSL root certificate. This certificate is trusted by the major browser vendors and there is no reason to delete it. Various countries are having their own certificate authorities and rogue CAs are quickly deleted through browser & OS updates if necessary.

I like to know more about Galileo, I also like to now more why fairphone is using these gps and glonass systems? But maby before you answer the quastion I google gps glonass and galileo first. So that quastion is on hold.

Your second quastion is answerd by your third comment.

Your first quastion because I turned it of and no I can’t get a gps location working. I’m not deep into the fairphone software. But it is a system certificate. So it is deep inside the fairphone system (or hardware). That is what I’m thinking. I wonder if it is common in the fairphone that it has this certificates?

So can somebody installed the root certifacte by updating my android system?

I also like to now more why fairphone is using these gps and glonass systems?

Because Galileo was still in its testing phase at the time of the phone’s conception and release, resulting in the choice of the SoC to use for the phone, which then would offer support for certain navigation systems.
Galileo went live in December 2016. Support for it in chips at the time the Fairphone 2 was designed was very limited. GPS and GLONASS were broadly supported already, so here we are.

I wonder if it is common in the fairphone that it has this certificates?

It is common for every computer potentially connected to the internet to have those. So smartphones have them, too.
Else for instance your browser wouldn’t be able to securely communicate with websites offering secure communication (HTTPS), at least not without you installing certificates manually.

Hello Hman,
I think gps can work without internet. You don’t need the internet to work.

Yes, and @hman exactly described how this works.

So can somebody installed the root certifacte by updating my android system?

I would suppose so, because there needs to be a mechanism to do the opposite, too: to deactivate certificates which became fraudulent, which happens from time to time.

What app is showing you this certificate?

My phone is connected to the internet g4 and sometimes wifi. So it is not a situation that it has no internet.

This certificate is normally part of your system, to validate the certificates presented by web sites you are visiting. If you visit a page from Turkey or use an app from Turkey, it may use this certificate to prove that the web site is genuine. It is trusted by Google and as such included in Android and Chrome - and I have checked that it comes with Firefox as well.

Many countries are having their own certificate authorities. Google and Mozilla are quite strict on CAs breaking the rules so the chance that they will harm your online security is pretty small.