I don’t know. I linked to the post where I got the info from.
The internet didn’t come up with much on that for me either.

On my FP3 I have deactivated …

… and can still send and receive sms.
I am using the Lineage sms app.

There may exist contradictive information, maybe it even depends on android version or vendor.

Just uninstalled the three packages. For gms I got:

and had to go to “Apps for device managment (Security and Location)” first and disable device management “Find device”. I seem to remember that I had already done this…

I can still receive and send SMS using QKSMS.

Edit.: The section in the settings for system updates is gone! That should be no problem though, when Fairphone releases stock images…

@Stefan
You could as well do a “install-existing” to get it back, then deactivate it via app settings and if you’re in the mood for an update check simply activate it temporarily. After that you’ll immediately get the system update menu back …
This is how it works for me.

Just to clarify, here my recent experiences with the update process:

6 Likes
Has anybody received the latest security update yet?
Play store and system update are incredibly slow
FairPaul March 16, 2020, 8:09pm #53

Same issue on FP3, havent figured a solution yet. 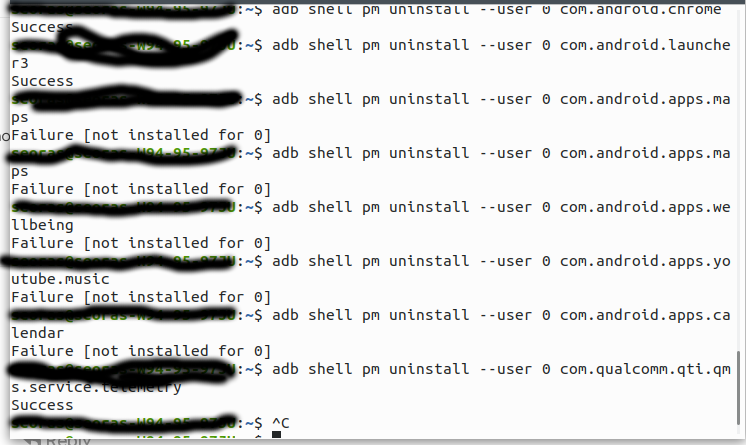 I disabled some Google apps manually (in Settings -> Apps -> Single app -> Disable) a few months ago. Even when at first they keep reactivating many times, after one FP update, they stayed disabled for many months. One or two weeks ago I updated the phone, and a few days ago Chrome app reactivates itself one or twice a day, usually during night (when I set plane mode) and in the morning also it’s my predeterminated browser. The weird think is that this only happens with Chrome, even when I have Calculator, Duo, Gboard, Google, Google Play Movies and Youtube Music disabled

. It’s just me with this issue?

I’m not really comfortable conecting the FP3 to the pc and activating debuggind mode… I think I should be able to decide which apps I want to use and which I don’t (even when I can’t delete it, at least deactivate it).

I think I should be able to decide which apps I want to use and which I don’t (even when I can’t delete it, at least deactivate it).

Someone at Google headquarters just laughed out loud

I observed exactly the same behaviour and got so annoyed after a few days that I eventually enabled debug mode and uninstalled Chrome… It’s really an easy process and can only recommend to do the same.