I noticed that in low light situations, the (main) camera image sometimes shows a pink hue in the center. In most cases, this is not noticeable in the final image, but from time to time, this uneven hue is visible.
Here you can see an example image of a wooden floor with low lighting, where I provoked the effect by manually increasing the ISO to 3200 and underexposing by -1. 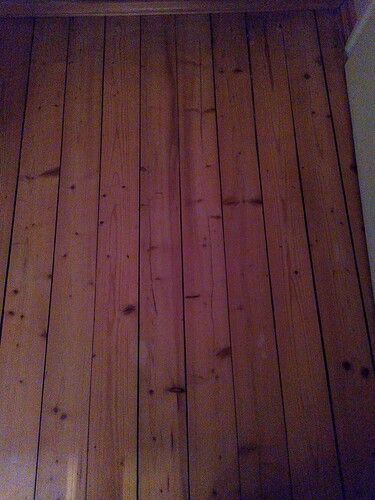 Welcome to our Community Forum

Have you already tested if the problem also exists when using other camera apps (e.g. Open Camera)? That would provide valuable hints as to whether it’s a software or a hardware issue.

Yes, it is also visible with Open Camera. There is also a similar, but weaker effect with the front camera.
As this effect can be observed on several other phone models, I’m assuming, this is a general weakness of some camera sensors and not an individual defect.
I’m just a bit confused that apparently almost no one notices or bothers about that.

Doing some more in-depth research, I found out that the possible reason is a special case of vignetting, which happens especially with wide angle lenses with high f-number, even on high end cameras. This does not only cause the brightness to drop towards the edges but can also cause a color gradient to cyan/green to the edges as the infrared filter in front of the camera sensor has a cyan tint.
This is often compensated by the camera firmware, but especially on extreme lighting situations, it seems that this doesn’t work perfectly. Now when auto white balance kicks in and tries to uniformly compensate a cyan/green hue at the edges, this will cause a pink hue in the middle.

I also found a second plausible explanation with crosstalk between pixels, causing blue and red pixels to receive light from the adjacent (twice as many) green pixels when light hits them in a high angle causing too much exposure in the red and blue channel, resulting in a pink hue.