This should be sufficient - I used this tool with an old wileyfox swift without any problem.

Ah, okay. Then it might work. Sorry for the confusion.

Yes, but it has also a USB-MHL-Output, the FP3 doesn’t.

Hello Frank,
thank you, but the lapdock is not a computer, just a monitor, keyboard, touchpad and battery. Therefore it does not work.

Hence the question about the displaylink adapter

I can’t say anything about the Lapdock, looks interesting though.

There’s a few Displaylink compatible adapters on Amazon (search for “DisplayLink”, or “DL-3500”), which are using DisplayLink’s chipsets and hence should be compatible with Android.

Best you could do is to check if the chipset is stated (e.g. “DL-3500”), and check with DisplayLink for compatibility (–> DisplayLink DL-3000 Series lists Android as supported).

Disclaimer: haven’t tried this myself, but please, if you do, share whether it works or not

…oh, and there seems to be another issue: not sure if the phone would be charged. Others in the forum have tried to connect USB-PD hubs which don’t seem to work.
I don’t know if the Lapdock delivers power to the phone, or even tries to, but I’d believe it is self powered, so no (excessive) drain on the phone battery at least.

Hello,
I guess @swhcz was talking about my adventures.
Here’s an update you may find interesting:

Hello, very much indeed! TL;DR: I did not find a suitable solution, I’m sending the hubs back. So, I tested another USB hub, with the same anecdotal result (no charging). I decided to perform some more rigorous tests. Here’s the parts list: Fairphone 3

ICZI hub UGREEN hub A DisplayLink USB3 to HDMI adapter I bought in 2015, now at the same URL there’s a new model Lenovo X1 Carbon and its 45W charger A standard phone 5V/1A charger Old TV with HDMI and USB The test is about …

There I’m using a 2015 USB3 to HDMI adapter (it has an USB-A connector). I used it before on computers USB2 ports and seemed to work right. It works right with the Fairphone 3 as well, but unfortunately, as @swhcz says, I didn’t manage to charge the phone at the same time.

Indeed, same question/quest. I was thinking about attaching a headset to the phone, maybe also LAN (and the occasional USB pendrive), to use the phone handsfree in e.g. Teams and phone calls.
But as the headset would be powered by the phone (I’m not owning one with Bluetooth), the battery would be dead before day-end.

So, I’m taking it that we’re looking at an unsolvable problem, it seems.

@serl, Thanks a lot for your feedback on this!!!

Ah, forgot to say: both Ethernet and USB audio integrated with the hubs do work as expected.

I have now ordered a Ugreen USB C HUB, it will probably take a month for it to arrive from China, but I will keep you posted!
Thanks and greetings Peter

I’m also regularly looking for a solution to connect my FP3 to a monitor. Sadly I haven’t found a solution where I can connect the phone directly to something. On my pc I’m using scrcpy for screen mirror and as soon as I switch from e/OS to Lineagos also sndcpy for sound.
As it is right now - maybe an arduino or raspberrypi solution might work. Which runs a script as soon as the device is connected.

Okay, I mirrored the Fairphone with scrcpy on the notebook. It didn’t work with the raspberry Pi 4, although it should work, but I didn’t pursue it further. The power supply of the Lapdock is not enough for the Pi, so I would need Lapdock, Pi, Powerbank and Fairphone, so it’s easier to use a small notebook.
Ugreen replied to me:
“…please kindly note that if the type-C port of your phone don’t support video output , then the HDMI port of this product will not work.
This is different technology comparing with Scrcpy…”
Does the Fairphone have video-out or not? If it works with scrcpy, there must be something, right?

Maybe these threads can help you as well:

When I mirror the screen of the fairphone with the google chromecast, it looks like this: 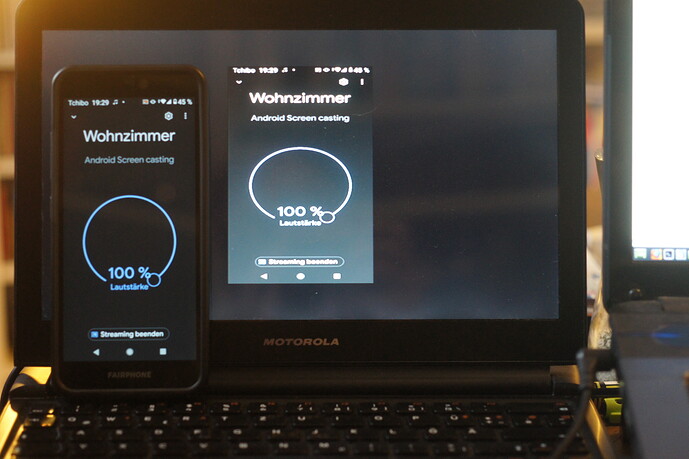 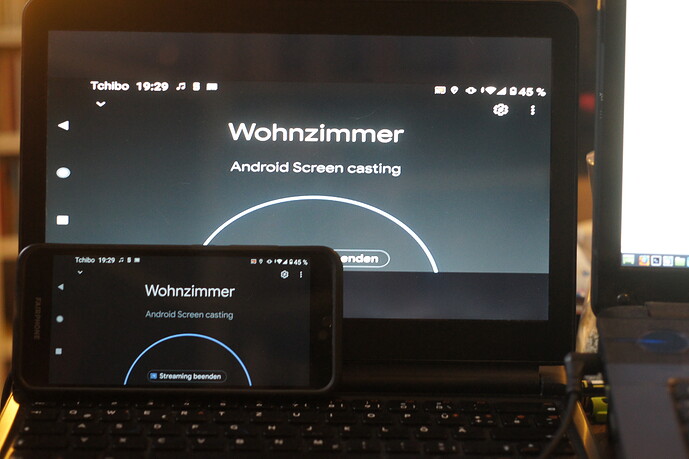 … also not usable.
As a second screen for the notebook or with the raspberry, the Motorola’s screen works well together.

So you have a band at the top and the ratio is out?

It is very narrow in the middle and compressed. It is also blurred. It works on the television. I have now ordered a new adapter for the Lapdock to the Chromecast. I’m not giving up yet…