I received a new update. I am surprised it says patch of April. 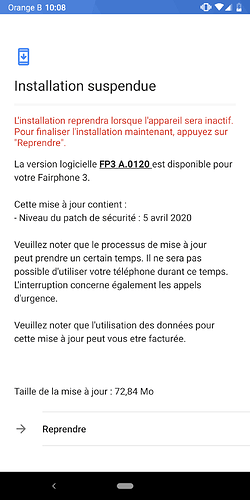 Received the update this morning too

It seems earlier than normal for the monthly security updates, so I’d guess it’s fixing something else

Security patches of april 5th were already included in update FP3 A.118
But as user arminzi wrote here, he recieved this update with a Vodafone-SIM.
Can someone confirm this?
It’s probably the long awaited Vodafone-certified update

Vodafone customers who did not get the previous updates – do you get message notifications through the LED now?

I had already received the FP3 A.118 and my provider is Orange Belgium.

the same for me (upc in switzerland).
but all vodafone users (at least in germany) never received an update since dec. '19 or jan. '20.
but now it seems that this update is finally available for vodafone-users too

apparently there is another FP3 A.0120 Android9 OS update, but still with security patchlevel of April 5th…

being the only line of information shown.

Mine is no-brand and I received it this morning. I think it solves a serious bug on the WIFI connection, that continued to disconnect and then reconnect. Now it is ok.

As far as I understood before, this update is relevant only for Vodafone customers, while I’m happy to hear that suddenly also a serious wifi bug seems to be fixed. Maybe Fairphone added some bugfix in this update too.

As a UK Vodafone customer, I can confirm that this is the first time that my FP3 showed me an update automatically (without me having to change the sim card to “trick” the Vodfafone network).

The last update I did before this one, which was the one with the April patch (using a different sim card), fixed the serious WiFi bug that I had, which is potentially the same as the one @Ayn refers to. So perhaps this update was indeed just to catch up all the Vodafone customers?

it solves a serious bug on the WIFI connection, that continued to disconnect and then reconnect. Now it is ok.

Hmm, my WiFi was fine until the update a few days ago, but now it’s constantly reconnecting.